Starting at
$1.00 for 30 days
Get Started
View all rates
You have permission to edit this article.
Edit
Home
News
Sports
Opinion
Obituaries
Multimedia
e-Edition
Classifieds
1 of 2 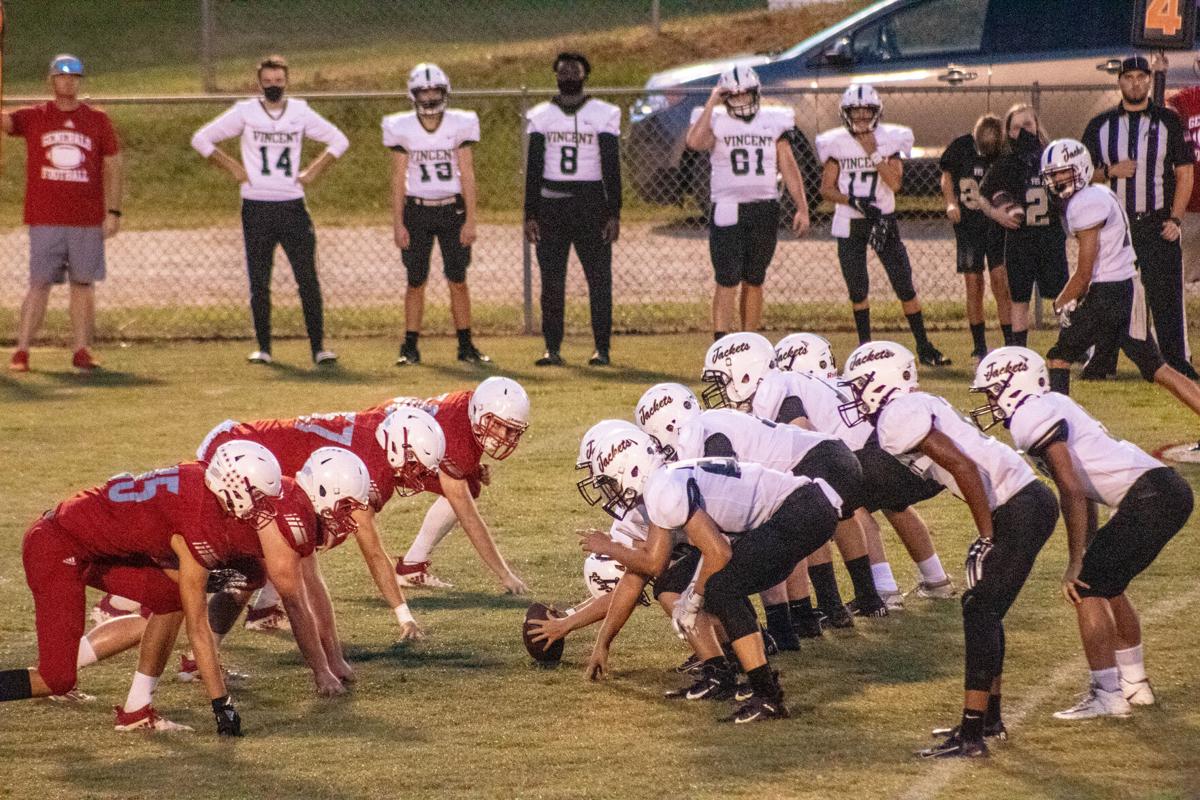 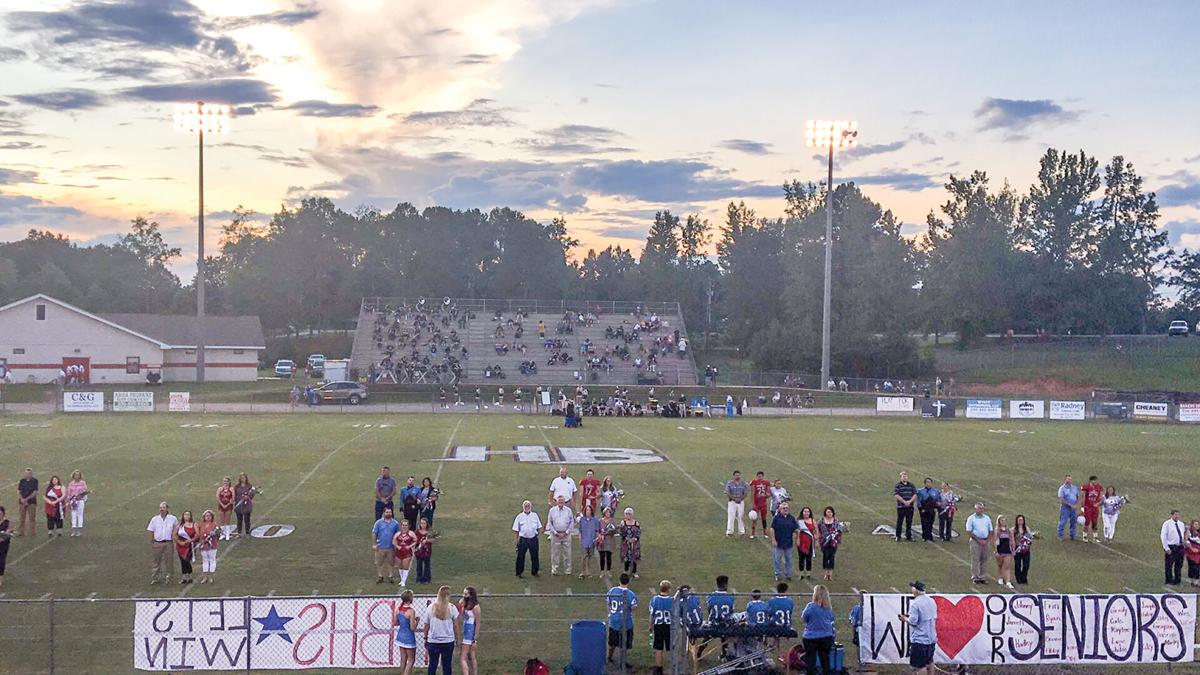 Lightning strikes could be seen beyond the south end zone from Horseshoe Bend as it hosted Vincent on Senior Night. But it was both offenses that were lighting up the field in a back-and-forth duel that was ultimately won by Vincent, 39-32.

Despite the loss, Horseshoe Bend coach Jeremy Phillips is still proud of the way his Generals played.

“Our guys really stepped up to the plate after last week,” Phillips said. “I was proud of how we played. I feel like we played hard the whole game and gave a lot of effort this week.”

Vincent has not played a game this season due to COVID-19, according to head coach Lucas Weatherford.

“It’s just great to be able to play,” Weatherford said. “We battled through adversity and that’s the first time I’ve seen Vincent do that in a long time.”

Horseshoe Bend (1-3) won the coin toss and elected to defer to the second half, kicking off to Vincent (0-3) to start the game. The Vincent special teams returned the kickoff to the Horseshoe Bend 40-yard line, sending its offense onto the field starting from inside enemy territory

The Yellow Jacket offense was unable to capitalize on the short field, as the Generals’ defense forced a three-and-out, capped off by a stop on a fake punt.

On the first play from scrimmage for Horseshoe Bend, Rylan Sharp ran for 42 yards to the Vincent 15-yard line for the Generals. A holding penalty on the following play by the offense moved the ball back and the drive stalled. Horseshoe Bend failed on a long fourth down and turned the ball back over to Vincent.

Vincent hit the ground running with an aggressive rushing attack on the Horseshoe Bend defense. A five-play, 75-yard drive was capped off by Jermarey Lawson’s 34-yard rushing touchdown. The point after touchdown was no good, and the Yellow Jackets were up 6-0 with 4:37 remaining in the first quarter.

The Generals answered on their next offensive possession with their own drive, this one a seven-play, 53-yard drive to the end zone. Holt Tidwell charged into the end zone from three yards out and Gavin Brazzell crossed the plains for a successful two-point-conversion, making it 8-6 Horseshoe Bend.

This set the tone for the remainder of the night, as the lead changed eight times.

Horseshoe Bend attempted an onside kick, but Vincent was ready for it and recovered it at its own 49-yard line. The Yellow Jackets took back the lead on a Lawson 30-yard touchdown run.

Now trailing 12-8, Horseshoe Bend began its next drive on its own 22-yard line. Led by Sharp and Chandler McMath, the Generals marched 78 yards down the field for the score. Sharp punched it in from the one and gave the Generals a 16-12 lead with 5:25 left in the first half.

Following consecutive three-and-outs by each team, Vincent held the ball with less than a minute until halftime. A quick pass and spike by quarterback Will Harris gave the Yellow Jackets enough time for Harris to hit his receiver in the end zone with 6.2 seconds remaining on the clock. Vincent took a 19-16 lead into halftime.

Horseshoe Bend took the ball out of the half, and a 61-yard rush by Sharp set the Generals up inside the Vincent 10-yard line. Brazzell scored from 5 yards out and gave the Generals the lead with 9:03 remaining in the third.

The Generals defense electrified the crowd on Vincent’s ensuing possession when it forced a three-and-out following the score. That momentum quickly turned as Horseshoe Bend muffed a punt and Vincent recovered.

The Yellow Jackets turned it into six points four plays later on Lawson’s third touchdown of the night.

“The (offensive) line — they work hard,” Lawson said. “They were pushing me. I had a good open field.”

Lawson’s touchdown and a successful two-point-conversion gave Vincent a 27-24 lead with 5:16 remaining in the third.

Later in the quarter, a Vincent snap that went over the head of Harris set the Yellow Jackets up with a long third down. Horseshoe Bend’s defense made the stop and sent its offense back onto the field.

Vincent answered on the heels of Lawson, whose 39-yard run to the Horseshoe Bend 15-yard line set up a touchdown pass from Harris to Tae McGregor with 7:41 remaining.

Horseshoe Bend looked to do what it had been doing all night, which was respond with another score. However on a fourth-and-six, Cole Johnson’s pass was intercepted by Vincent’s McGregor, who took it 60-plus yards to the house.

“Tae does what Tae does,” Weatherford said “He’s a playmaker; he’s got some speed. It was the play of the game for us.”

Horseshoe Bend couldn’t move the ball its ensuing possession and turned the ball over on downs following a failed fourth-down-conversion. Vincent put the game away after it converted a third-and-11 with less than a minute to go on a physical run by Harris.

“Will Harris is a warrior,” Weatherford said. “He’s a leader; he was our captain tonight. He put the team on his back when he needed to.”