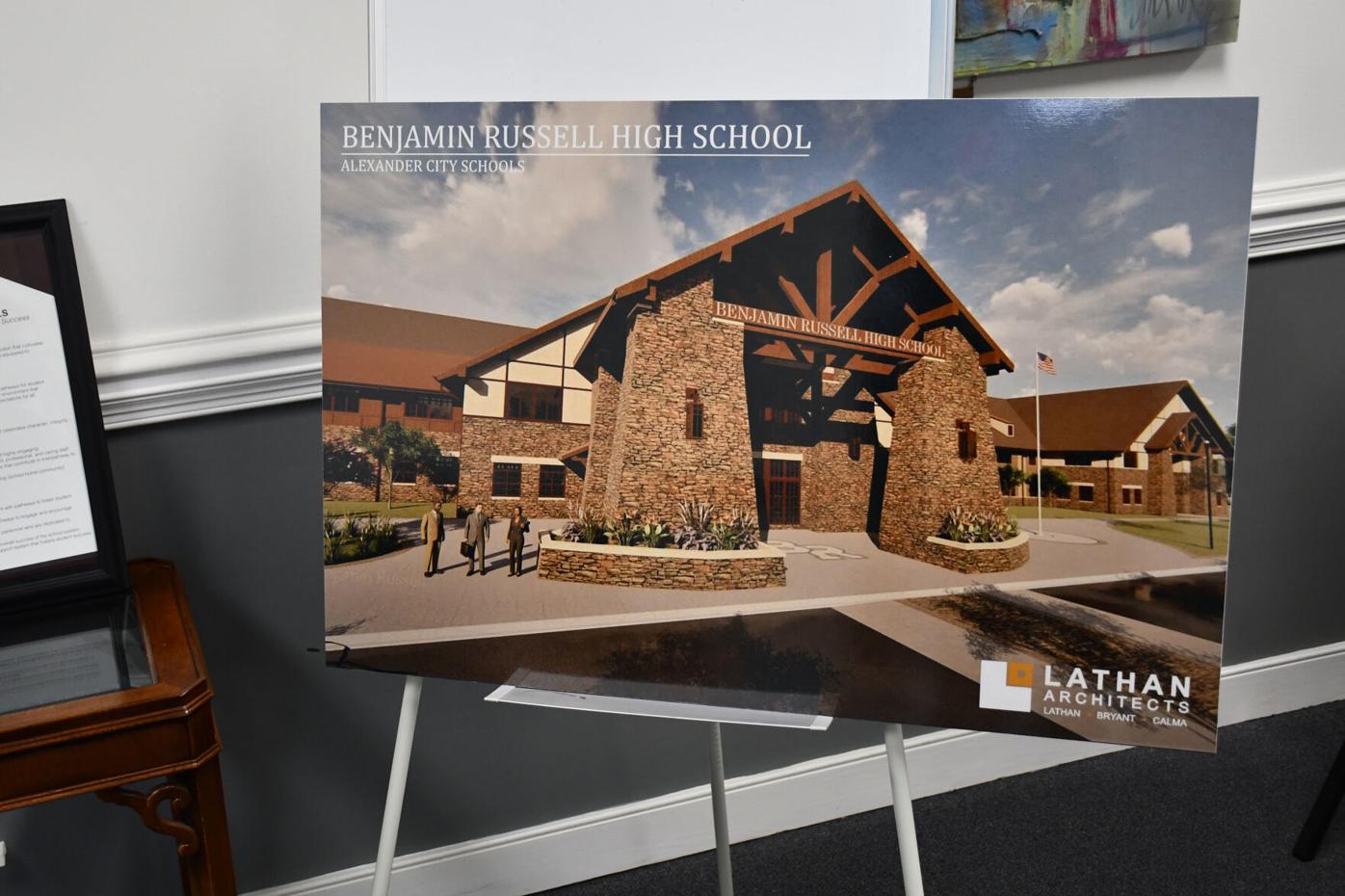 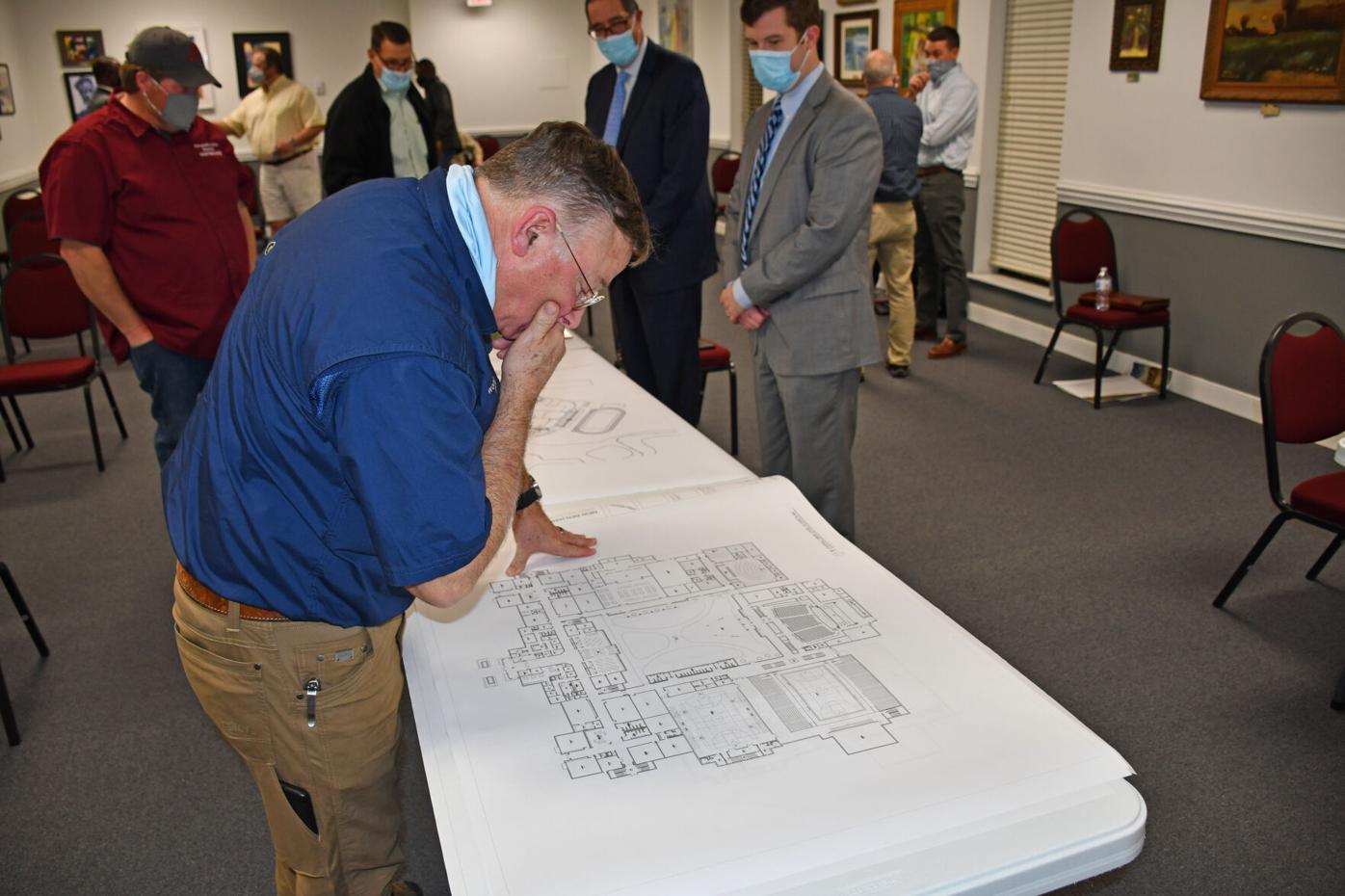 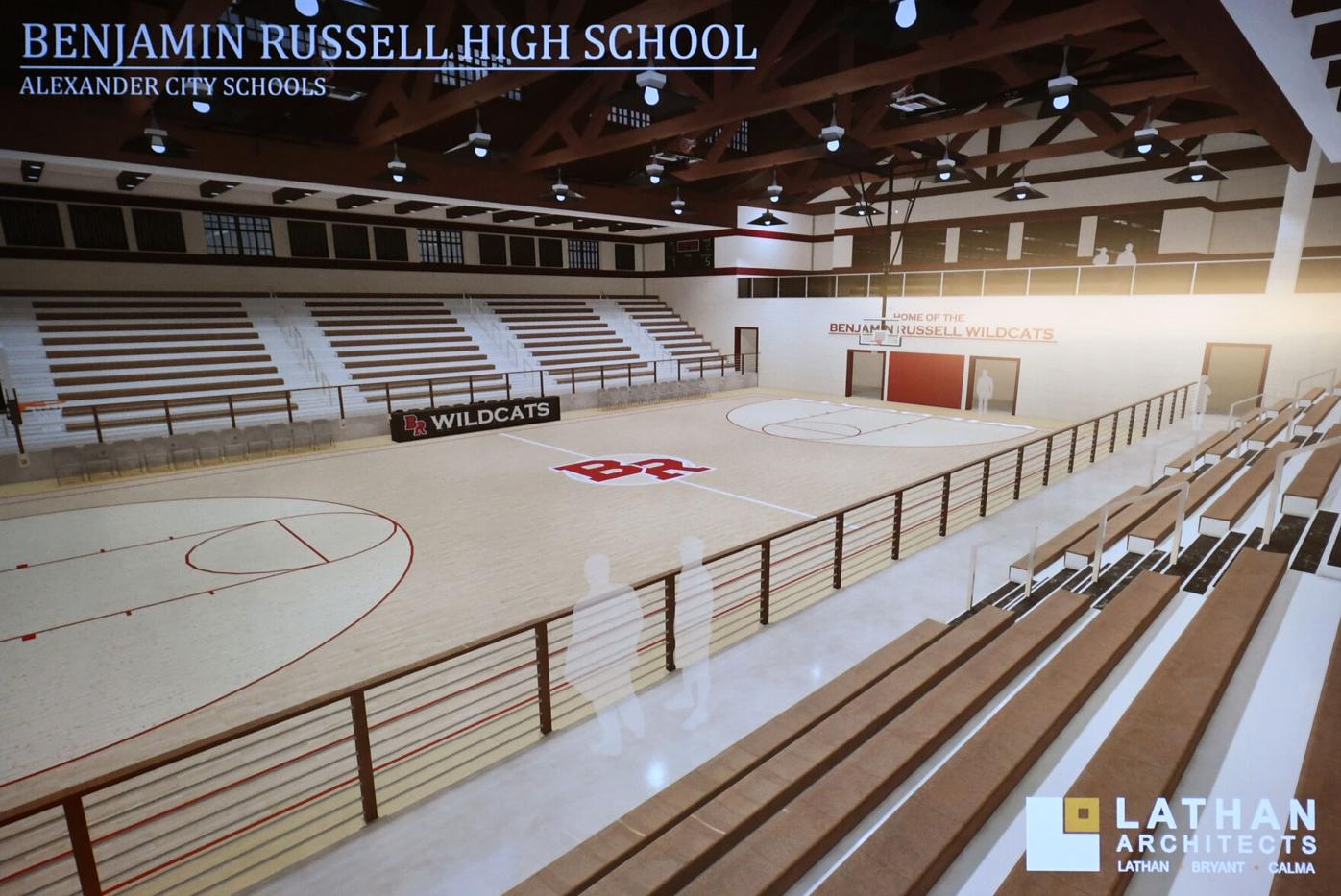 Submitted / The Outlook The new campus will have an auxiliary gym and a competition gym set below the ground floor, with interior windows from the main floor that look into the gym. 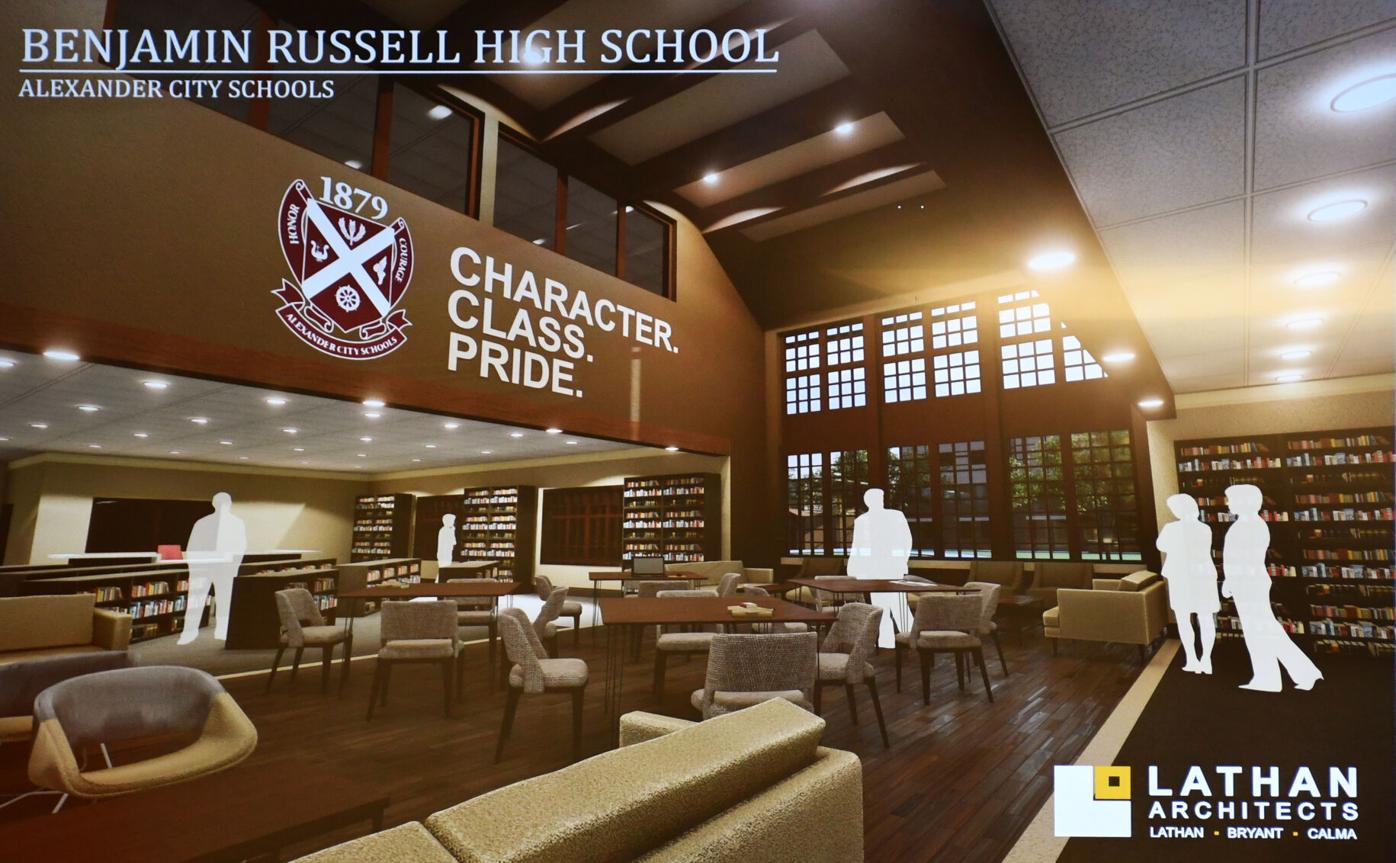 Submitted / The Outlook A "media center" library will open into an interior courtyard. 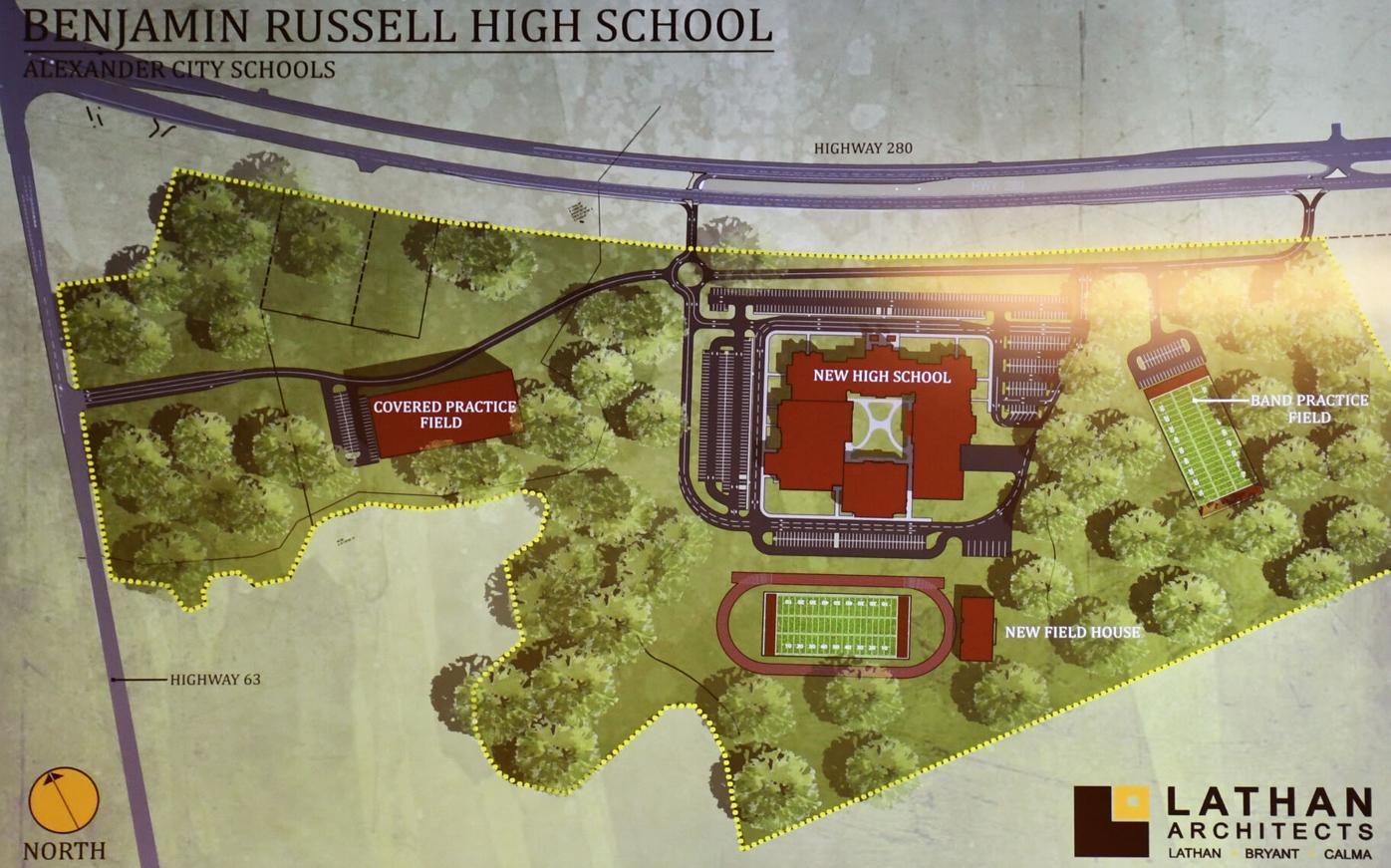 Submitted / The Outlook The latest birds-eye plan shows a roundabout linking the 63 and 280 entrances to the parking lot. 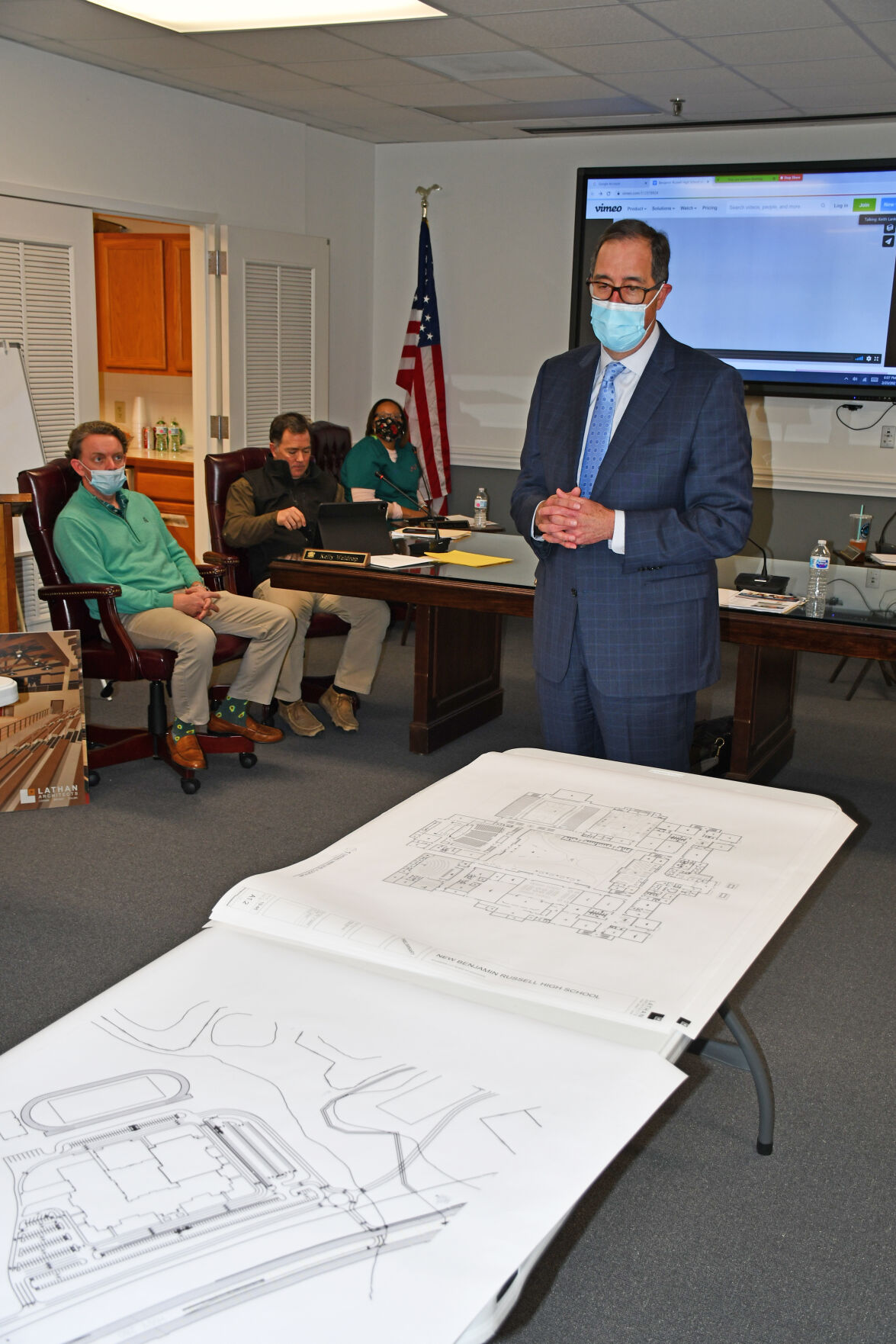 Architects for the new Benjamin Russell High School unveiled their completed renderings Tuesday — a lodge-style building with an imposing presence on U.S. Highway 280.

"We understand this could be a huge economic shot in the arm for Alexander City," Alex City Schools superintendent Dr. Keith Lankford said. "It will be a prominent feature as you're driving up and down."

The main-entrance side of the building will occupy 500 feet on the frontage of U.S. Highway 280, project architect Ryan Vernon said, and will sit slightly higher than the road.

"It's going to be a great presence there as you're driving down Highway 280," Vernon said.

Earlier this month, Alexander City Schools officially handed over the check for the new campus as part of a facility improvements project over two years in the making. The property, located on the southern corner of the intersection of highways 280 and 63, was purchased from Allen Oil Company in Sylacauga.

While the community has already seen a preview of preliminary architectural renderings, Tuesday's unveiling painted a more complete picture, including stonework, a dormer-style front entrance, wood-paned windows and wooden rafters in the gym.

School board president Kelly Waldrop praised the architectural design and expressed the hope others along the State Highway 63 corridor would follow suit.

"I think from the get-go our thought process from the school was to reflect the architecture of the lake and (bring) it into town," he said.

Lankford also praised the architects for "keeping with the nature and the Lake Martin thing."

"One of the things that you'll notice about the design is that it has many faces," Lathan said. "It's not just a Hollywood front and then you enter the front and then the building changes within. There are many entrances, many exits to the building."

The main building will also be centered around a courtyard as the main hub, with the library and cafeteria spilling into the courtyard. The other side of the courtyard will feature an outdoor amphitheater.

Lathan said the courtyard was designed with security in mind.

"(We're) promoting the courtyard as the outdoor space for primary use because of safety," he said. "It's easy to close off; it's easy to monitor."

Other features include 44 general classrooms, a competition gym, an auxiliary gym, an auditorium with balcony seating and a band room which can be doubled as a storm shelter. The main competition gym will be on a lower level with interior windows looking down into it from the ground floor.

"All of the gyms, the auditoriums — things that are typically nighttime functions — those areas can be isolated and closed off from the main building at night so they can operate independently," Lathan said.

Lathan said the school was also designed for growth. While Benjamin Russell currently has 880 students, the new school will be built for a capacity of 1,050, with space to expand.

Apart from the main building, the design also features a covered practice field, band practice field and a football field, field house and track. Lankford said having the facility to host sectional track meets was a priority for him.

Lankford also addressed traffic safety, thus far one of the biggest community concerns due to the amount of traffic flowing through 280 and 63. The intersection has seen several fatalities in the last decade and has been dubbed, variously, "a malfunction junction" and "suicide."

Earlier this month, Lankford said the school system was working with traffic engineering firm Skipper Consulting and taking "every one of their recommendations." The latest design includes an on-campus traffic circle connecting the parking lot, 280 and the student entrance off 63.

Lankford said he and the traffic engineers have discussed ways to safely shepherd vehicles.

"We went over a lot of scenarios — how we can cone off a certain area for an a.m. or p.m. drop-off, how we can keep students somewhat separated from the carpool and where buses come in," he said. "We think we have a very good plan for that."

The school system has also been in discussion with Alabama Department of Transportation (ALDOT) over the past year on improvements to the surrounding roads. Lankford said they'd work with ALDOT to lower the speed limit, widen the road on 63 and add a left turn lane into the 63 student entrance.

"We don't have any definitive timelines from (ALDOT) but we do have the commitment from them that they're going to work with us to try to get our timelines to coincide," Lankford said Tuesday.

Alexander City Schools expects the new campus to be complete and ready for students by the fall semester of 2023.

Partly cloudy skies in the morning will give way to cloudy skies during the afternoon. A stray shower or thunderstorm is possible. High near 85F. Winds E at 5 to 10 mph.