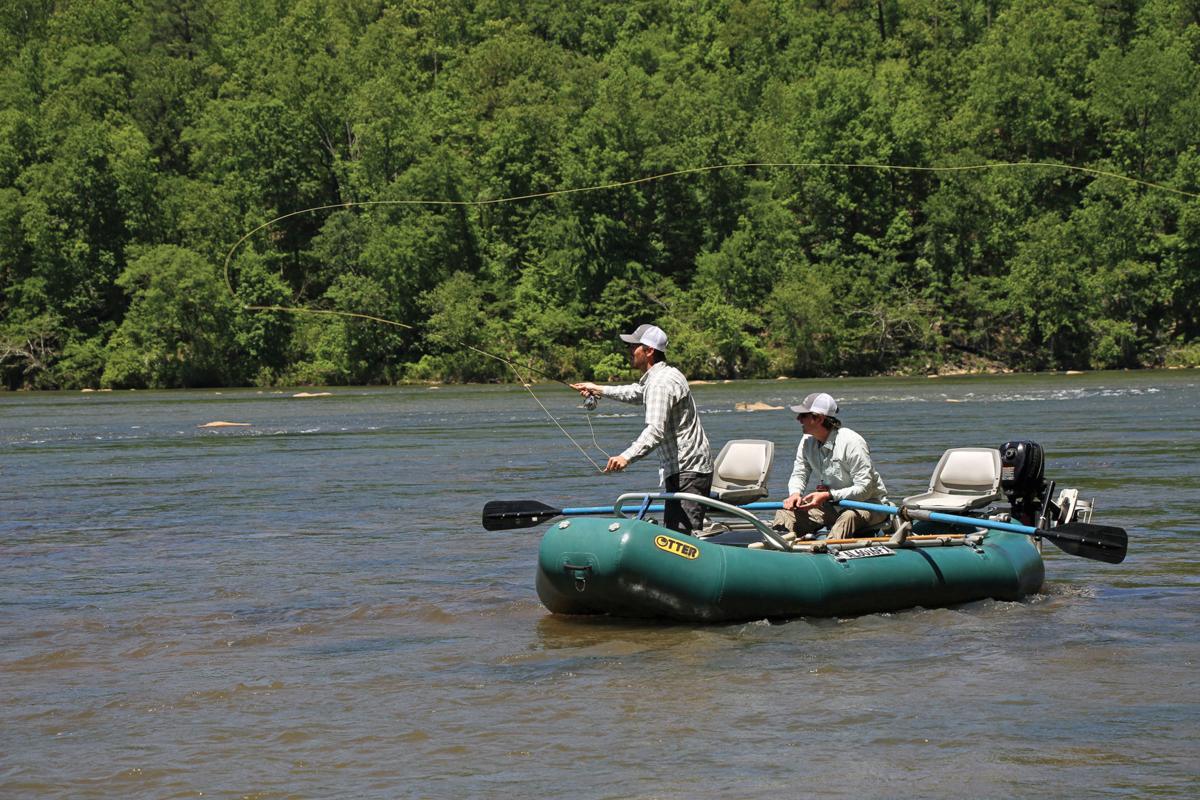 Craig Godwin casts a fly toward a likely spot for redeye bass as Drew Morgan maneuvers the drift boat into position. Photo by David Rainer 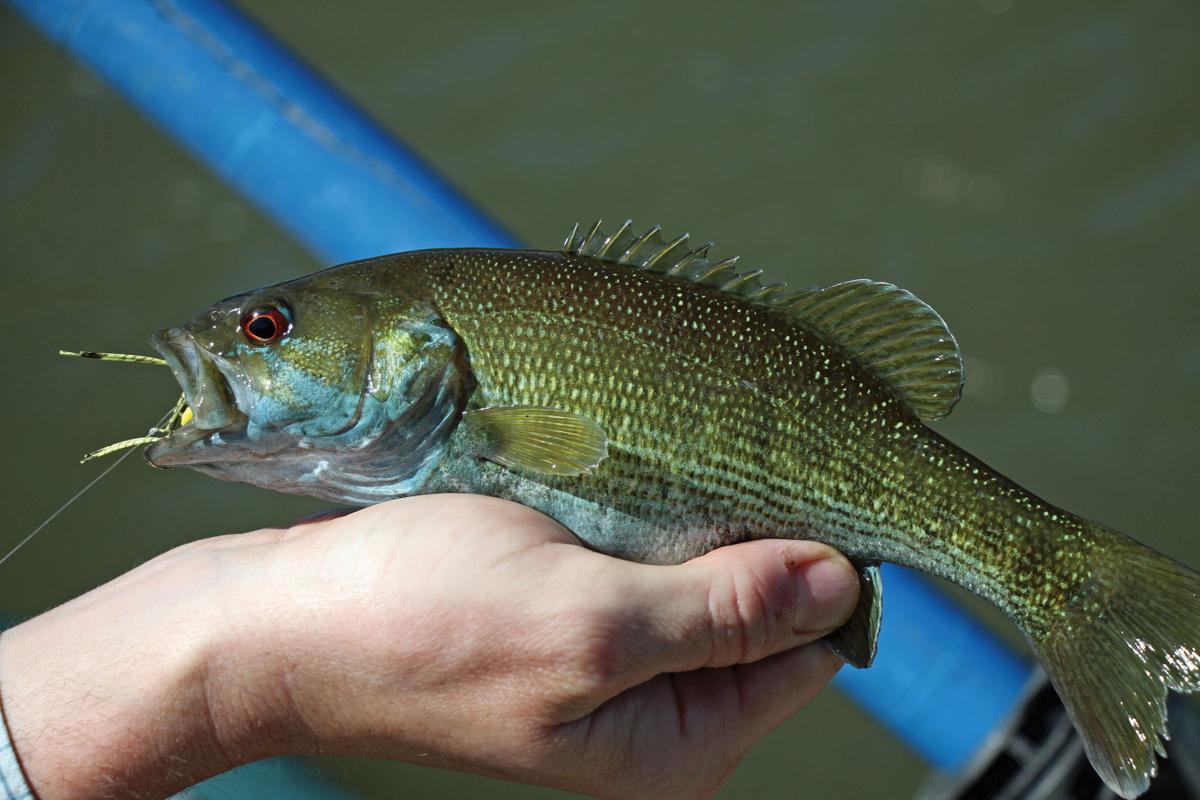 Fisheries biologist currently believe the redeye bass in the Tallapoosa are specific to that river system. Photo by David Rainer

Craig Godwin casts a fly toward a likely spot for redeye bass as Drew Morgan maneuvers the drift boat into position. Photo by David Rainer

Fisheries biologist currently believe the redeye bass in the Tallapoosa are specific to that river system. Photo by David Rainer

The cast was about 2 inches too long, and the topwater fly plopped down gently on a chunk of flat rock underneath the blooming mountain laurels on the Tallapoosa River north of Lake Martin.

One slight twitch of the fly rod tip and the Ol’ Mr. Wiggly fly slid into the current. The fly didn’t have time to float downstream. It was immediately inhaled by one of the Alabama-specific species, the redeye bass.

I lifted the fly rod to set the hook, and the fish went airborne.

Guides Drew Morgan and Craig Godwin immediately pumped up the volume when they saw the fish.

“That’s a big one,” they both shouted. “Try to keep him out of the current. Keep the rod at about a 45-degree angle.”

After several runs near the three-man inflatable raft, Morgan finally stabbed the net in front of the fish to end its freedom – only momentarily, of course.

The tape measure hit 12 inches, and I was immediately eligible to be entered into the Alabama Wildlife and Freshwater Fisheries Division angler recognition program as a master angler. It also happened to be the first redeye bass of my long fishing career.

Horseshoe Bend was our origination point, and the river had settled down from recent rains to levels that would make the trip a breeze with no portage involved.

It didn’t take long for these aggressive, beautifully colored bass to make it a float trip that will never be forgotten. Although trips with Morgan or any of his guides at East Alabama Fly Fishing often result in hooking a variety of species of fish, including Alabama bass, striped bass, hybrid stripers, carp and numerous sunfish like bluegills and redbreasts, this outing produced a redeye bonanza.

Morgan, a history teacher at Auburn Junior High School, got into the guide business after gaining the necessary tool.

“I fished this river a lot with canoes and kayaks,” Morgan said. “I really enjoyed catching bass on a fly rod, but that’s hard to do out of a kayak or canoe. A guy I knew had this drift boat. He told me, ‘Take this out and start fishing with it.’”

The owner knew Morgan would fall in love with the diversity and comfort the drift boat afforded, and it wasn’t long before ownership of the vessel changed hands.

“I had to have the boat,” Morgan said. “I took the bait – hook, line and sinker. At the same time, I was thinking about starting a guide service. This stretch of river is big enough for guiding. I’m not moving people off their honey holes. It’s beautiful. The fish are predictable, and you can pattern them. I just needed the boat. Once I got the boat that was stable and was comfortable for clients, we opened the guide service.”

The drift boat gives Morgan and his passengers access to the whole river at decent water levels. It can float in 2 inches of water and slides over the slick rocks that crisscross the river in numerous places.

“We can go where other boats can’t,” he said. “And it’s stable so you can make casts to the best spots.”

Five years later, the business has grown to include three other guides — Godwin, John Agricola and Justin Wilson. Agricola and Wilson guide on the nearby Coosa River.

“Justin is really knowledgeable on spotted (Alabama bass), hybrid and striper fishing on a fly,” Morgan said. “And he has a power boat, so he can run all over the lakes. He fishes the tailwaters a lot on the Coosa.

“John has a flats boat, and his specialty is catching carp on a fly in the backwaters of the Coosa. That’s a really cool experience. You’re sight-fishing for carp. You try to drop that fly right in front of them. It’s kind of like fly fishing for tailing redfish or bonefish.”

Morgan limits his guide time to three days a week when school is out to spend time with his young family. During the school year, he’s limited to Saturdays.

“It was kind of a way to make a little extra income during the summer,” he said. “But I limit it to three trips a week. I want to continue to enjoy coming out here.

“Craig and I have been fishing together for a while, and he can guide during the week because he owns his own photography business.”

Our trip covered the middle section of the Tallapoosa from Horseshoe Bend National Military Park to Jaybird Creek boat launch at the north end of Lake Martin.

“That stretch is 6 miles and it’s mostly shoals the whole way,” Morgan said. “I find fish in this river like being in the shoals. The area we floated was Irwin Shoals. It’s very scenic. Even if it’s a tough bite, you get to float down the river and get to see things you normally don’t get to see.”

Morgan said the stretches of the smaller rivers are often overlooked by most recreational users.

“You don’t really feel like you’re in Alabama sometimes, but it is Alabama,” he said. “The lakes are really popular, for good reason. But people don’t realize there are beautiful rivers and streams you can float-fish too.”

Morgan and his guides will accommodate anglers of all skill levels. He said there is something for everybody in the Tallapoosa.

“Mainly, I want to get people into the sport,” he said. “If they want to come with me, that’s fine. But I just want people to get on the water, buy a fishing license to support the state and appreciate what we have.”