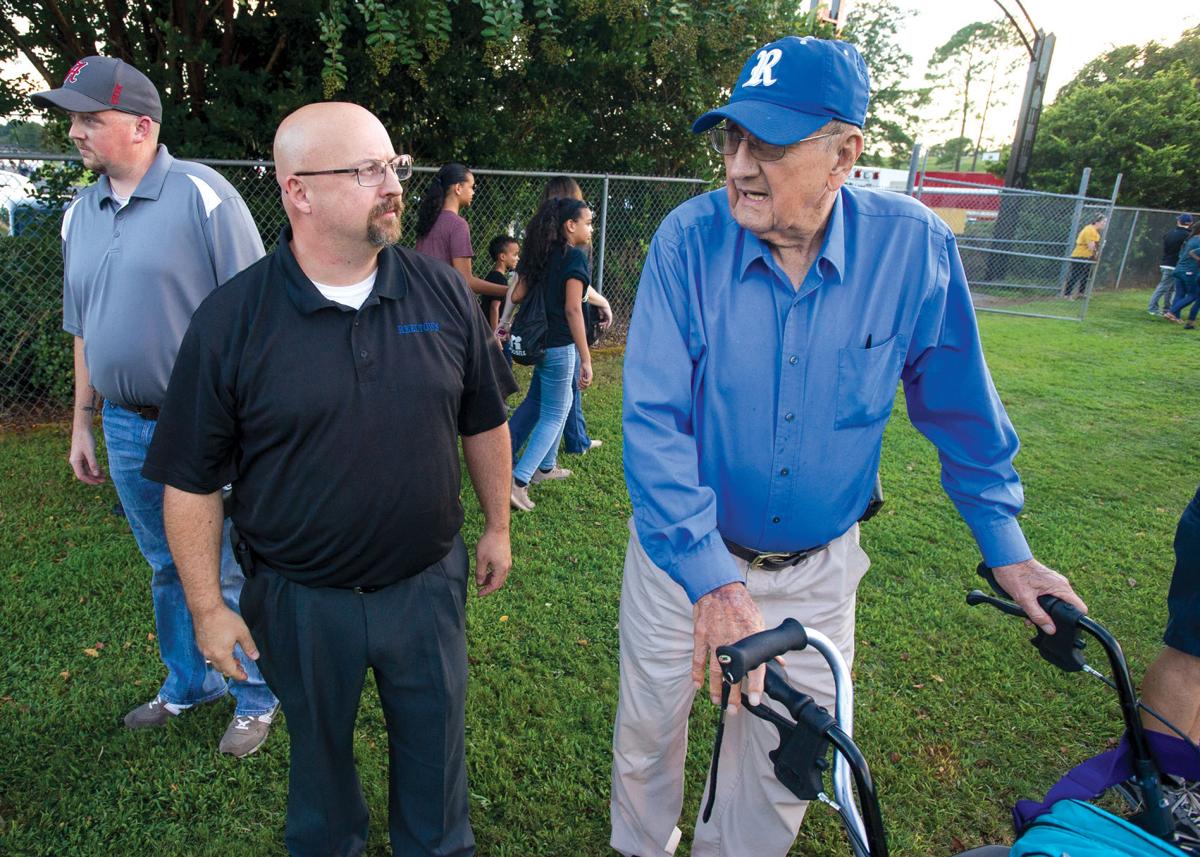 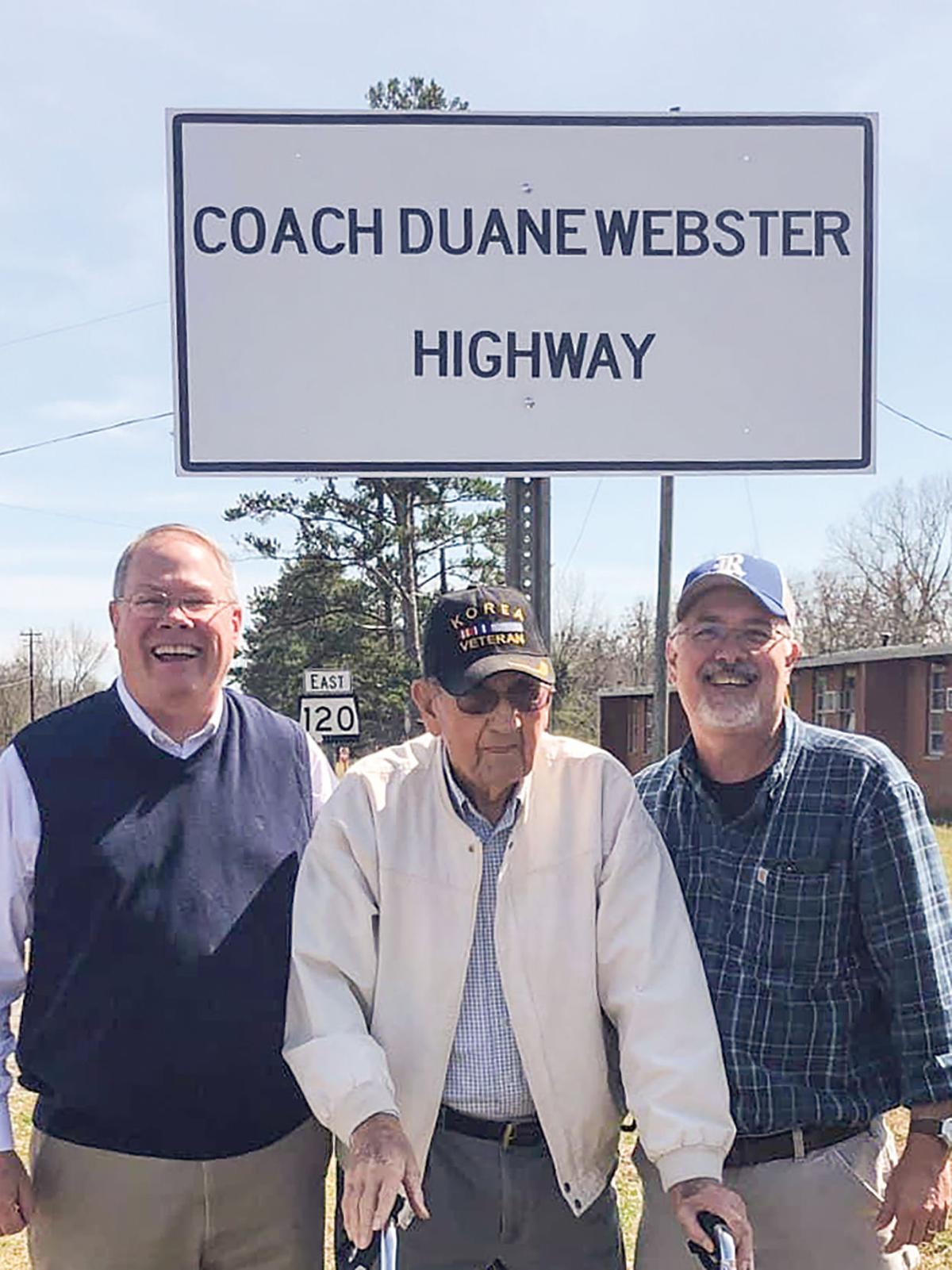 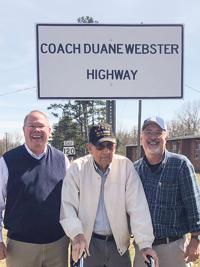 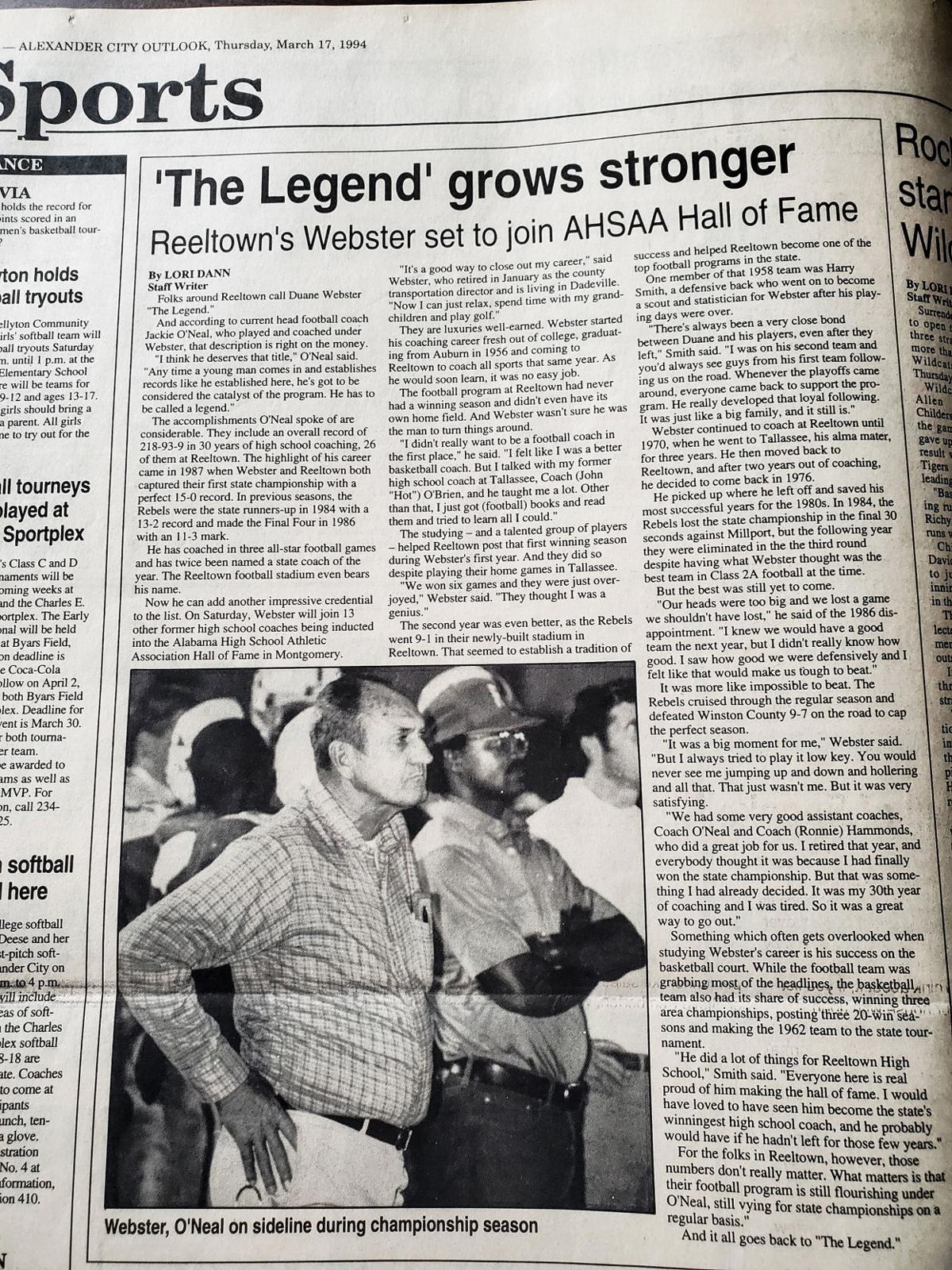 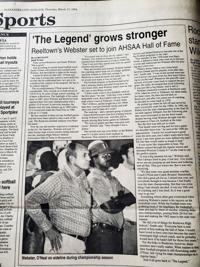 Reeltown coach Duane Webster, refered to as ‘The Legend,’ was inducted into the AHSAA Hall of Fame March 20, 1994.

Reeltown coach Duane Webster, refered to as ‘The Legend,’ was inducted into the AHSAA Hall of Fame March 20, 1994.

Duane Webster is known to most as a tough coach, a little rough around the edges but loved, well respected and inspirational to students and players who interacted with him throughout his long-term career as Reeltown High School’s football coach.

Recently a portion of Highway 120, where the high school is located, was renamed in Webster’s honor thanks to the efforts of some former football players, the Tallapoosa County Commission and the state legislature.

Tom Coan and Gary Clayton played under coach Webster during the only undefeated football team Reeltown ever had at the time and wanted to do something for him for his longstanding dedication.

“Back then, he was kind of rough around the edges,” Coan said. “He was a tough coach but we all loved him; we still love him.”

Coan connected with District 5 commissioner George Carleton Jr., whose area covers Reeltown, to kick off the process of changing the road name.

“We wanted to name part of the state road after (Webster) but that was going to be pretty complicated so we decided we’d name (Highway) 120 where the Reeltown school is located,” Coan said.

Carleton then coordinated with Rep. Ed Oliver (R-Dadeville) who took the resolution to the state and the sign went up in March.

“It is very, very rare to name a road after someone much less while they are still living,” Oliver said.

Carleton said, “(Webster) is a good guy. When (Coan) came to me, I was more than happy to help in any way I could.”

Webster, who won 208 games over his 26-year career at Reeltown, was unaware of the designation until the day the sign was installed where an announcement was made at the high school.

“He was surprised by the announcement and got up to give a speech (the day the sign was installed),” Carleton said. “He was very thankful and a little emotional. You don’t see him get emotional much.”

Coan echoed the sentiment and said Webster made a statement that, “I’m not a speaker and wasn’t expecting this,” but gave a great speech anyway.

“We actually had people come from Mobile and all over the state to be there; it turned out really good,” Coan said. “That’s the way all the players who played for him feel about him. He sure did have a huge impact on people.”

Carleton is also one of those students who has impacted by Webster and was appreciative of all his efforts.

“I think he’s a great guy, great coach and mentor to anyone who ever went to school down there,” Carleton said.

Tallapoosa County superintendent Joe Windle has an extensive history with Webster and was his sixth-grade manager during Webster’s first season at Reeltown in 1956. Windle was also his starting quarterback at Reeltown the last three years the quarterback was the play caller.

“Webster came to Reeltown in 1956 and up until that time the Reeltown football team seldom won a game,” Windle said. “When he came, everybody else in the school system was the same; there were no other changes. He is proof that one person can make a difference.”

“And that’s where history began,” Windle said. “He won over 200 football games and was elected to the Alabama High School Athletic Association Hall of Fame (in 1994).”

According to the Alabama Football Coaches Association website, with Webster at the helm, the Rebels went 13-2 in 1984 and became state runner up. Reeltown won 12 games in 1985 and went to the semi-finals in 1986 with an 11-3 record.

In 1987, he was voted coach of the year after the Rebels went 15-0 and won the 2A State Championship with a 9-7 victory over Winston County. Webster retired in 1987 and handed the reigns over to Jackie O’Neal who was his top assistant.

Aside from his coaching abilities, Windle feels he’s an all-around standup man.

“He is a tremendous human being, a man of principle and a man who if he told you something, you could count on it,” Windle said. “He was very demanding but loved his players.”

Reeltown then found its place on the map in Alabama high school football due to Webster’s keen abilities and tough, competitive nature.

“Naming that highway portion as Duane Webster Highway is well deserved,” Windle said. “He has earned that through his work. There is no better example of how one person can make a difference. He just made a tremendous impact on so many kids’ lives and instilled a lot of things that helped you be successful.”

The current signage on Highway 120 is temporary and Carleton said a new one is being ordered as its permanent replacement.

To this day, Webster makes an appearance at every Friday night Reeltown home game he can attend.