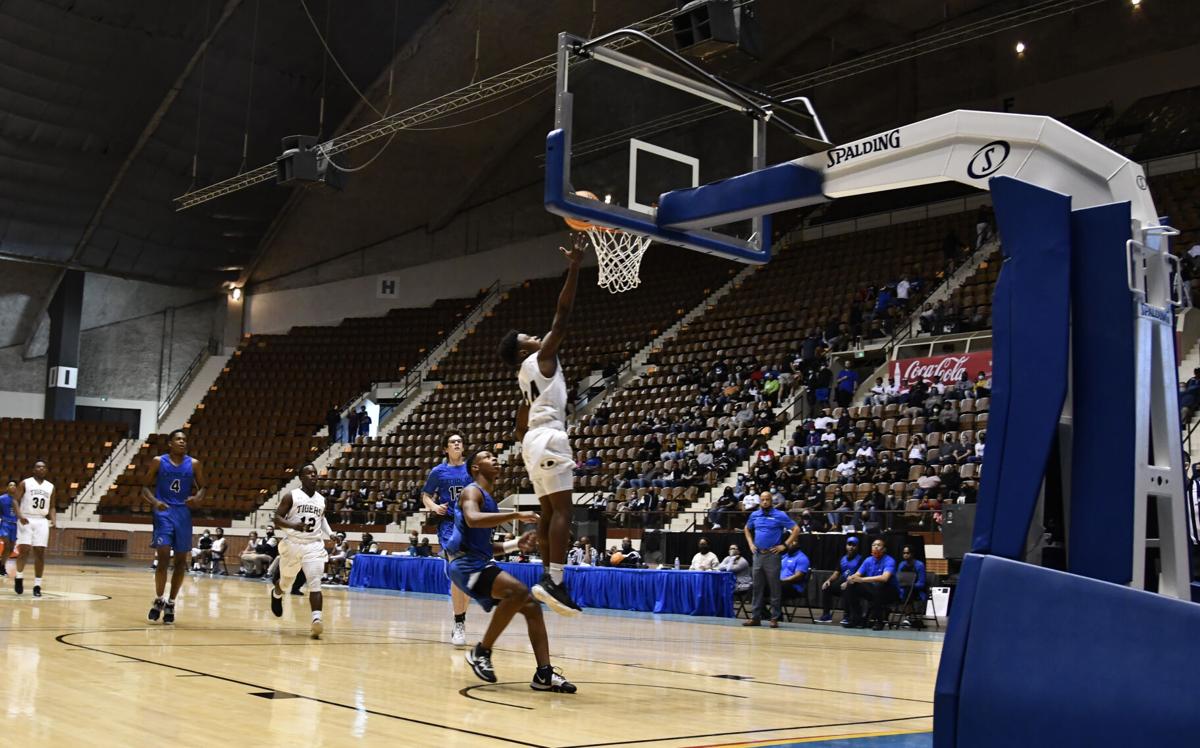 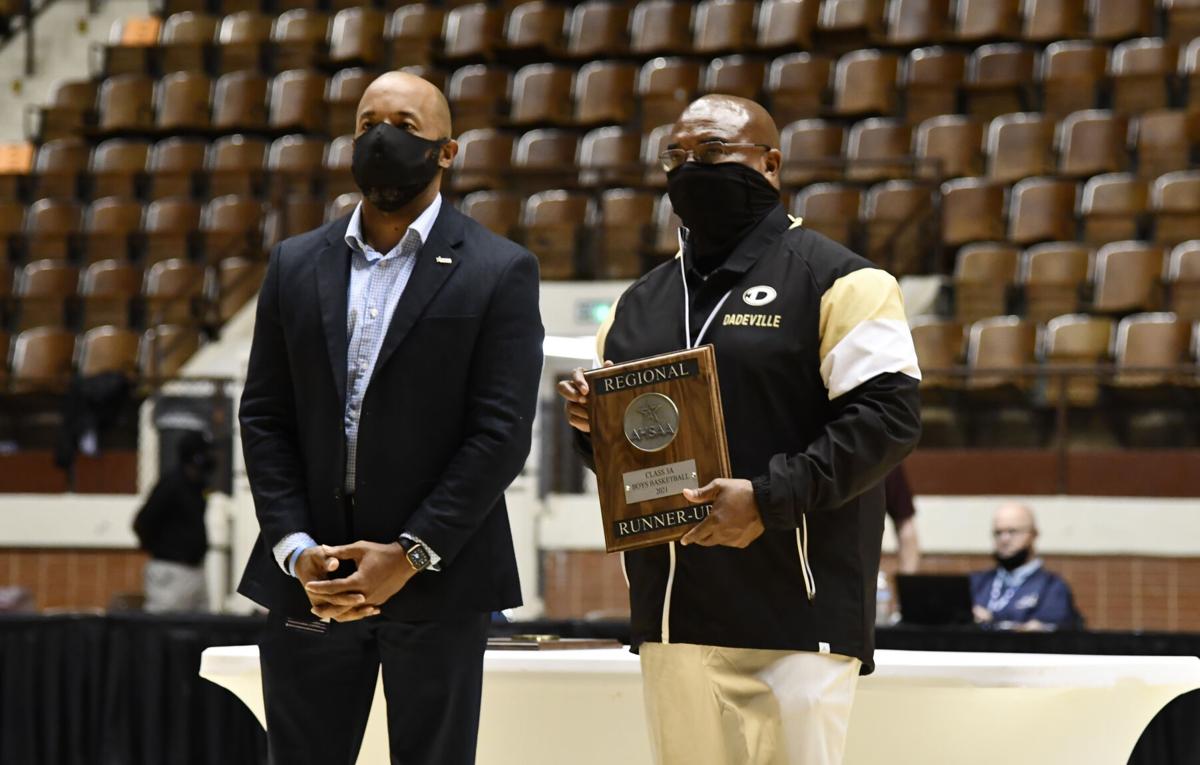 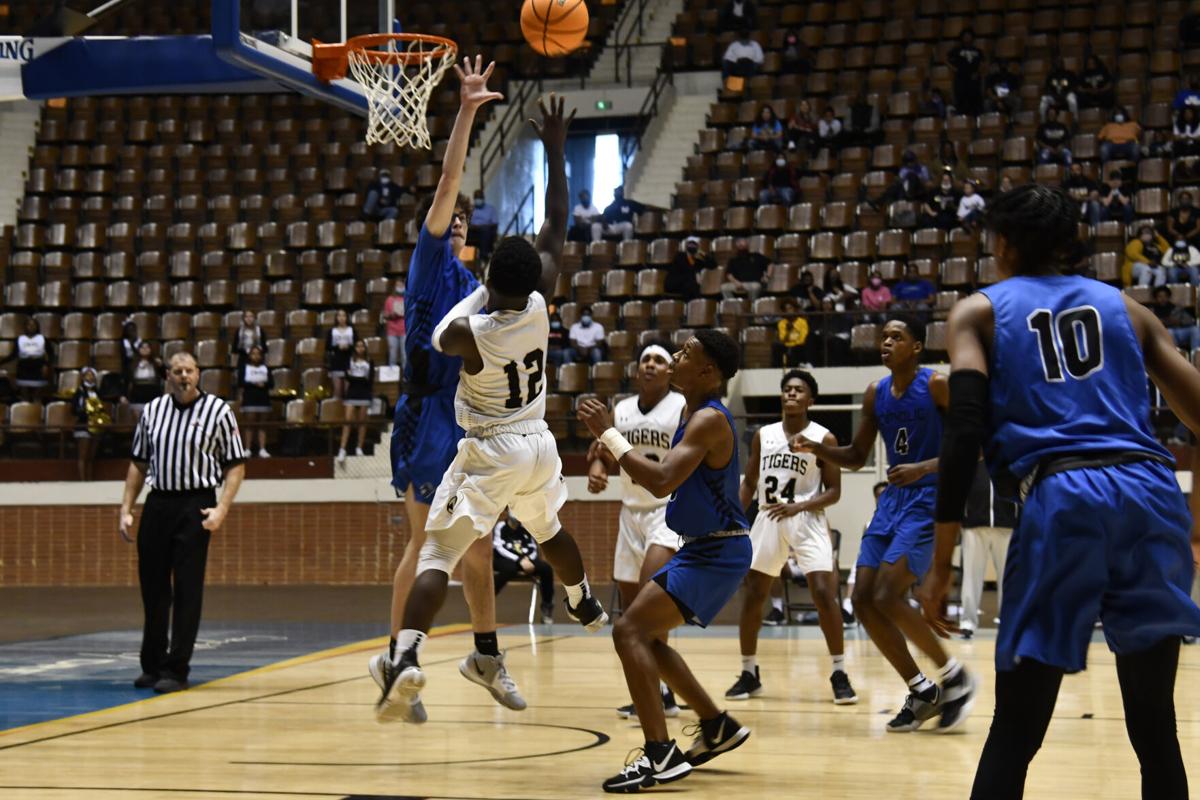 Darius Goodman / Tallapoosa Publishers Dadeville’s Daquan Doss goes up for a shot against Montgomery Catholic while in traffic. 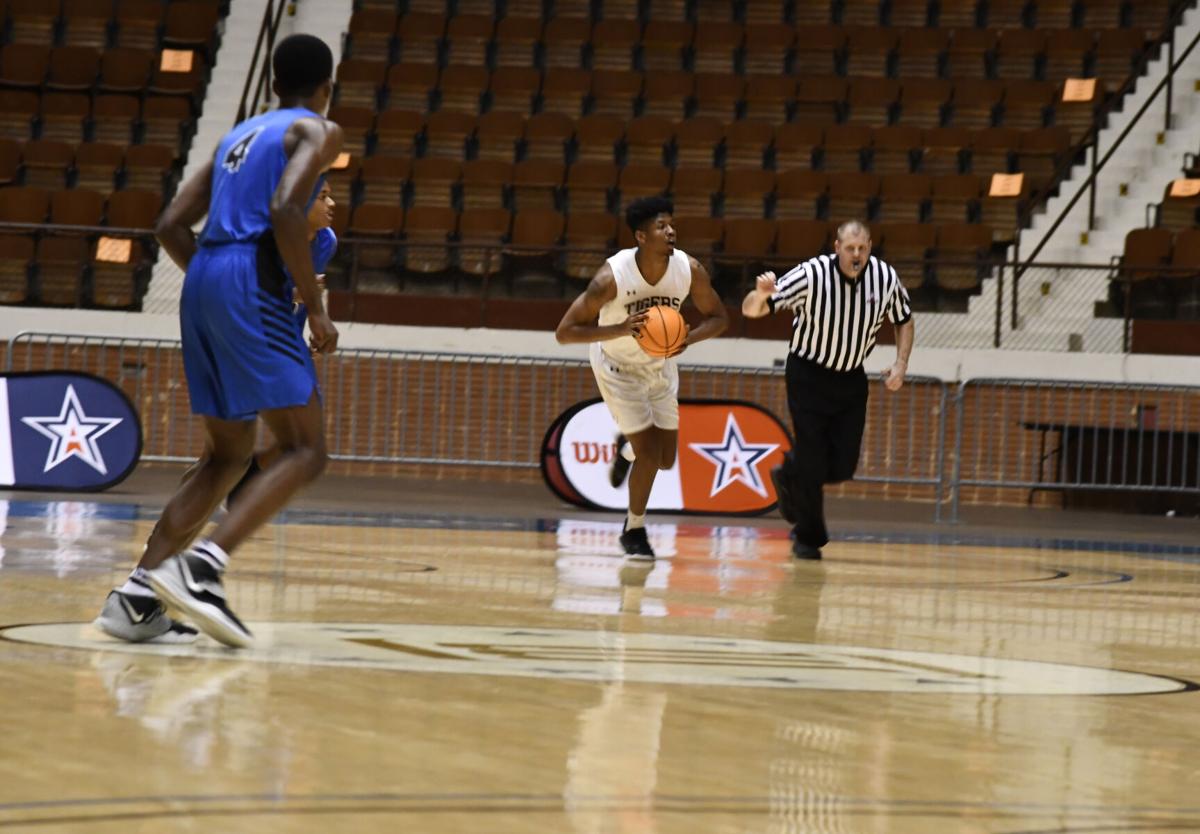 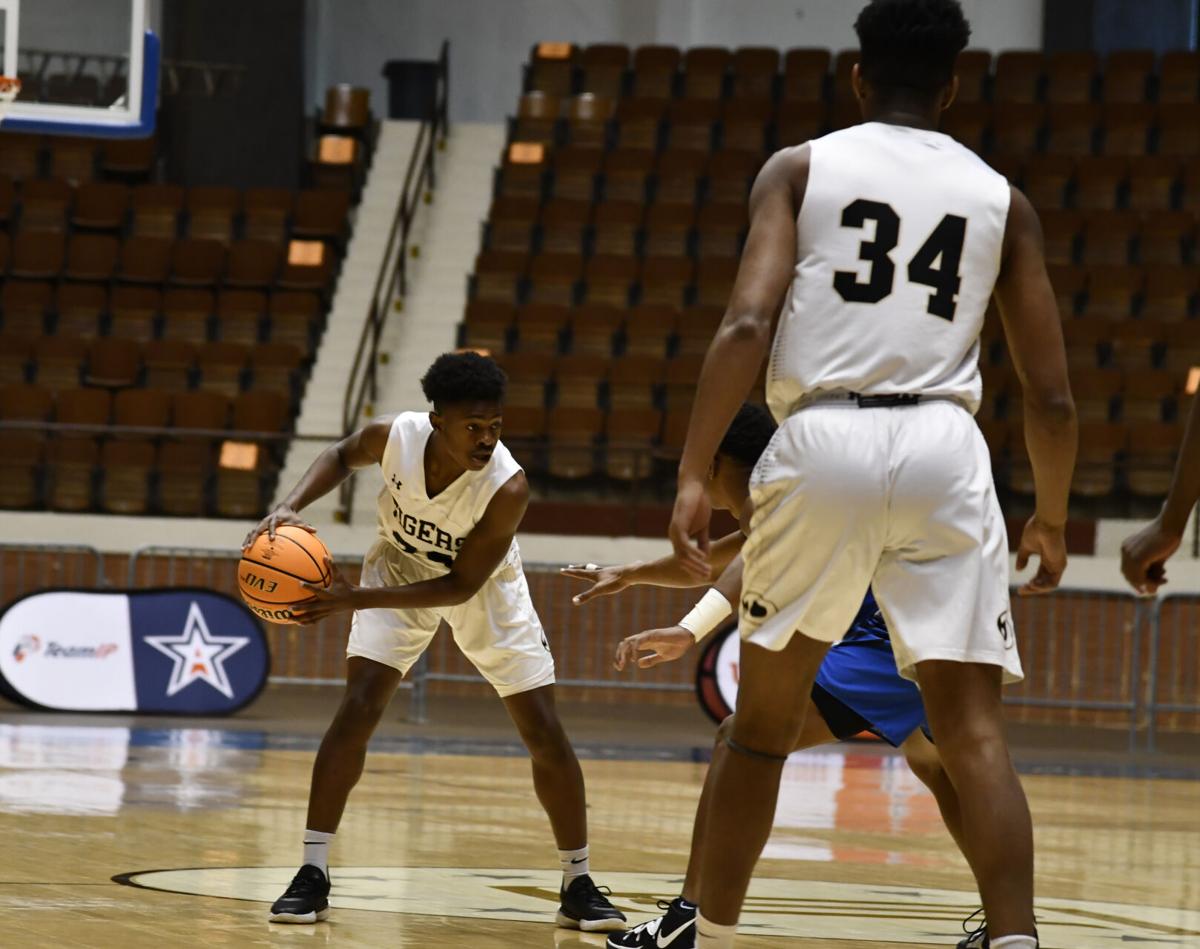 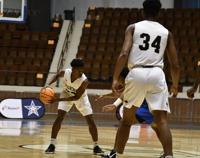 Darius Goodman / Tallapoosa Publishers A Dadeville player looks across the floor for a friendly jersey to pass to early in the game against Montgomery Catholic. 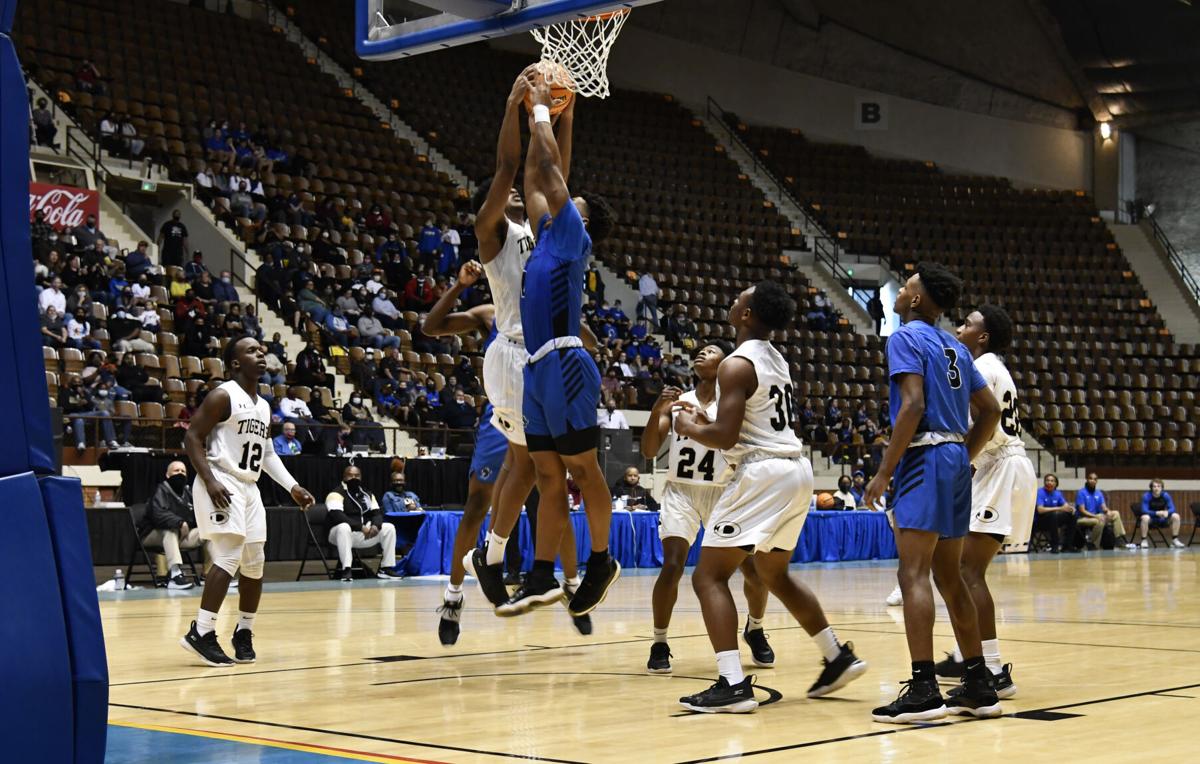 Darius Goodman / Tallapoosa Publishers Dadeville’s PJ Eason goes up to block a shot with both hands firmly on the ball. 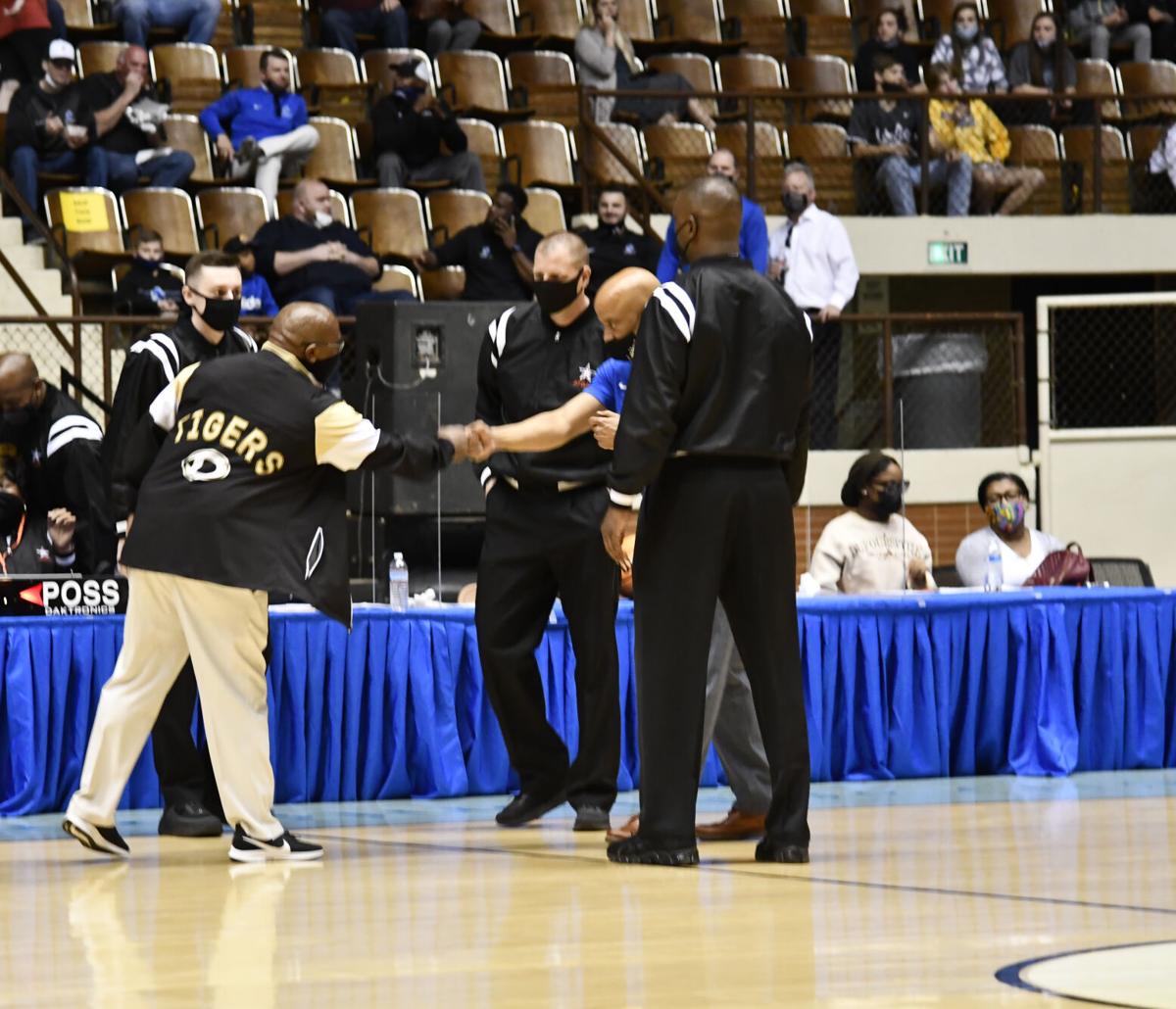 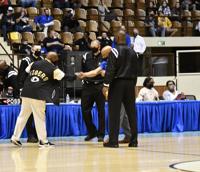 Darius Goodman / Tallapoosa Publishers Dadeville’s Daquan Doss goes up for a shot against Montgomery Catholic while in traffic.

Darius Goodman / Tallapoosa Publishers A Dadeville player looks across the floor for a friendly jersey to pass to early in the game against Montgomery Catholic.

Darius Goodman / Tallapoosa Publishers Dadeville’s PJ Eason goes up to block a shot with both hands firmly on the ball.

Dadeville’s season came with a lot of adversity.

Tuesday afternoon, the season ended with the program reaching the Garrett Coliseum but falling 76-58 to Montgomery Catholic’s Knights.

Throughout the game, the Tigers struggled from deep, missing five straight three-pointers; it was bad enough that the Tigers wound up missing 19 total from deep.

“That’s what we’ve been living by all year,” Dadeville head coach Jesse Foster said. “We’ve been shooting them all year. Just tonight we didn’t hit none. That’s the nature of the beast. Sometimes you make them and sometimes you’re not. We just had a bad night at the wrong time.”

The Tigers struggled from the beginning but still managed to keep pace with the Knights. The first two scores of the game went to the Knights’ Daniel Jamerson and Johntarius Green. On the Jamerson score, it wasn’t from a lack of trying for Dadeville. The Tigers just missed out on two early rebounds that led to the first score.

The first points of the game for the Tigers came on a fast break by Antojuan Woody. Nearly 50 seconds later, Daquan Doss checked into the score book with a made jumper of his own to tie the game.

A foul by Jordan Parker put the Knights at the free throw line for the lead but things progressively began to get worse for the Tigers. The Knights turned a 7-6 lead into a 12-6 lead as the Tigers went cold offensively.

Getting out-rebounded was one thing; the Tigers also found themselves turning the ball over far more than expected. Even through the adversity, the Tigers managed to keep a close 12-8 gap at the end of the first quarter.

The second quarter was a different story.

Both sides traded points in the opening minute but the Tigers went cold offensively.

Following a Jordan Rambo layup, the Tigers were unable to score for more than two and a half minutes. In that span, the Knights went on a tear, scoring another six points to extend the gap to 10 points. Despite efforts, the Tigers never closed the gap back to under 10 in the first half.

But the halftime buzzer brought relief and the Tigers woke up. Montgomery Catholic wasn’t out of reach as the program trailed 33-23.

Both teams traded shots back and forth to open the second half. The Tigers managed to hit both of their opening possessions with fast breaks to PJ Eason and Doss.

From there, it was a game again.

Eason made a jumper count and even drew the and-1 to help the Tigers’ cause, but it was a dunk on a putback that got the Tiger fans at Garrett Coliseum cheering. The Tigers were back alive and the deficit was down to four points.

The score was 35-31 with a little under six minutes remaining in the third, an ideal situation.

But as the Knights added more points over four minutes of play, the Tigers ultimately saw their hole grow deeper. The Tigers once again found some momentum to get back in the game.

Eason dunked the ball for a score and Antojuan Woody cashed in with a layup of his own to chip the deficit down to 44-40. Unfortunately, the Tigers made a mistake defensively and with it the momentum shifted tremendously.

The Knights made a three-pointer from the corner on the hands of Matthew Reardon and a steal led to Jamerson scoring on a jumper to go ahead nine-points.

“We got behind in the first quarter and at halftime we were down 10 I think,” Foster said. “But we got back to within four. I told them we gotta make our free throws. I think it was 44-40 and missed four free throws in a row. We had the opportunity – we just didn’t take advantage of it tonight.”

The final quarter of play saw the Tigers defensively unable to stop their opponent; regardless of their made shots, the Tigers ultimately gave up the same on the other end. Montgomery Catholic’s lead fluctuated between eight and ten points but never under that mark.

It wasn’t a good end to the Tigers’ dream-like season but there’s always next season. All things considered, it was still a good year for the Tigers who saw their head coach battle back from COVID-19, play 11 games and even make it to this point in the season.

The area champions did have a grateful coach in Foster.

“I enjoyed the ride. I just told them in there that it wasn’t the end of the world,” Foster said. “It’s just a game. You win some, you lose some. We just came up short tonight.”

It wasn’t bad for the two-time region runner-ups. But now the future starts, Eason is among the seniors graduating but the Tigers have a solid core returning, and with it a proclamation from Foster.

“We got talent coming back and we’re going to miss PJ, he’s been a great representative of the program. I’ve been coaching him since he started playing basketball at Dadeville and he did a great job,” Foster said. “I’ve got some young guys that are sophomores that will be juniors next year and we’ve got a great opportunity. We will be back. We’re going to quit being bridesmaids, I promise you that.”

Eason ended his night with 23 points and 14 rebounds. Doss was only able to put up 10 in the loss.