License buyers now have the option to purchase a hard card with wildlife art for an extra $5. 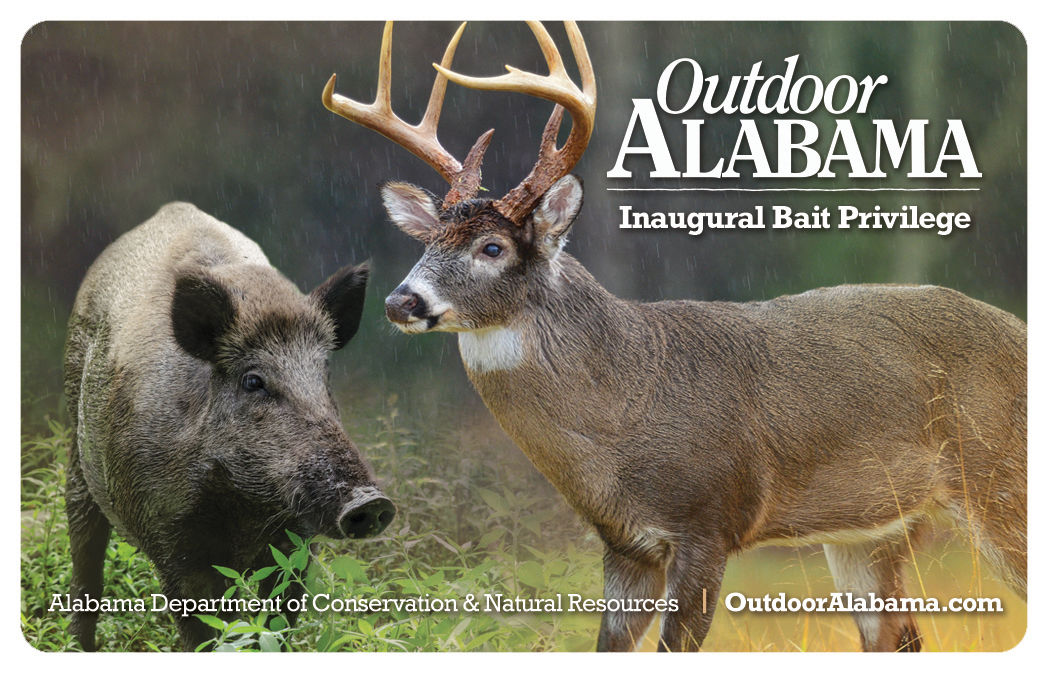 License buyers now have the option to purchase a hard card with wildlife art for an extra $5.

Want a beautiful piece of wildlife or nature art that you can carry with you wherever you go? Plus, you get a heck of a deal. You can get that piece of art for just $5 when you take advantage of Alabama’s new hard-card licenses that went on sale this week for the 2019-2020 hunting and fishing seasons.

For an additional $5 fee, purchasers can select from eight different cards that depict a variety of outdoors scenes. The art scenes include deer, turkey, freshwater fishing, saltwater fishing, wildlife heritage with an indigo bunting, sandhill crane and shooting sports. A deer and feral hog adorn the inaugural bait privilege license.

A total of 32 license privileges are eligible for purchase as a hard card, including annual hunting and fishing licenses for residents and non-residents, state duck stamp, Wildlife Heritage and bait privilege licenses. Trip licenses, lifetime licenses and no-cost privileges are not included in this feature.

“We worked so hard for years to get away from a paper license to something electronically so people could have it on their phones,” said Chris Blankenship, Commissioner of the Alabama Department of Conservation and Natural Resources (ADCNR). “That’s been really good for a lot of people, but we get a lot of requests for a hard-card license that people can put in their tackle boxes or keep in their wallets, so they can have that with them if they don’t have their phones or whatever reason.”

Blankenship said other states have seen collectors’ markets develop for similar hard licenses with a variety of outdoors scenes.

“We had seen in Florida and some other states where the hard cards have become collectible,” he said. “We wanted to create hard cards with multiple wildlife and nature scenes that people could choose from. If they love saltwater fishing, they can pick a saltwater species. If they love freshwater fishing, they could choose a freshwater fish. If they hunt deer or turkey, they can get those.

“Particularly for our Wildlife Heritage licenses, we wanted to create a card for bird watchers or people who may not hunt or fish but enjoy using Forever Wild lands or State Parks. They can support the Department by purchasing the Wildlife Heritage license and the hard card that goes with that. So, we have a hard card that fits just about everybody.”

Blankenship hopes people will embrace the hard cards here as they have elsewhere.

“From what we’ve seen in other states, a lot of people like to buy the whole set that is available for that year,” he said. “They might have their license privileges added to one card and then buy the others so they can have a hard card without a license privilege attached to it. While that option is not available this year, we’ll see after this year what the demand is for that.”

With all the distractions of the modern world, from computer games to smartphones, license sales for outdoors activities have been struggling to maintain status quo. Blankenship said the general public doesn’t really understand the importance of license sales to conservation and wildlife and fisheries management through the ADCNR.

“We are a self-funded agency, so license sales and Parks revenue fund all the work that we do at the Department of Conservation and Natural Resources,” he said. “That’s why we think the Wildlife Heritage license and the hard card that goes with it might be a good way for people to support the Department. We can match those license sales with federal funds and do good work for the resources of our state.”

The Sport Fish Restoration Act requires that 15% of all restoration money be spent on public boating access. It also requires Alabama and other coastal states to fund marine recreational fisheries projects at a ratio determined by the number of resident freshwater to saltwater anglers.

For hard-card collectors, Alabama’s wildlife and nature images will change annually. After this inaugural roll-out of the hard cards, Blankenship said there is a possibility that the photos of the winners of the annual ADCNR Photo Contest could be used to adorn each year’s edition of hard cards.

“We have a lot of ideas about what we can do with the hard cards,” he said. “Really, we decided to do the hard cards for two reasons. One was to meet the demand for people who wanted a hard card to put their license privileges on, and the other was to find ways for other people to support the work of the Department.”

After purchase, the hard licenses will be mailed to buyers within 10 days. If you plan to hunt or fish before you receive your hard card, be sure to keep a paper copy of your license or have it available on your smartphone.