Although Lindsey Smith, Jake Adams and I have remained close in the three-plus years since I left Pennsylvania, it’s still hard to get a sense of what’s going on for them on a day-to-day basis.

Especially right now, when sports writers around the country are working to find stories to fill their pages, it’s easy to become hyperfocused on what’s happening in just one of our states. But this project gave all three of us interesting insight on how each state is handling the return of athletics amid the coronavirus pandemic.

RUSH TO RETURN: How Alabama’s reopening plan compares to other US states

We all remain steadfast in supporting our state’s athletic associations but also think there are pros and cons across each states’ organizations. Here are our thoughts:

Lindsey Smith, Colorado Springs Gazette: Alabama is most intriguing to me in regards to its initial response and reopening plan. The AHSAA was the first of our three states to cancel spring sports and the sixth state nationally to pull the plug despite having very few COVID-19 cases in the state. Now it will be one of the first statewide reopenings come Monday.

We know football is a different beast in the south. Is it bold to presume AHSAA’s early reaction in canceling spring sports was done with hope the state would get the virus under control so it could be the first to reopen and therefore be ready to begin summer football on time? Regardless of reason, I hope the health and safety of athletes and coaches are prioritized above getting back on the gridiron.

Pennsylvania’s approach is less intriguing and more frustrating, in my opinion. I understand the difficulty as Pennsylvania’s most populated area is just a stone’s throw away from the nation’s epicenter, but the idea the winter basketball tournaments remained “postponed” as the state was on lockdown is just silly. While the cancelation of Colorado’s basketball tournament was heartbreaking for those athletes, having your championship dreams hang by a thread for nearly a month before being called off is an even more tragic end.

Pennsylvania’s reopening plan isn’t unlike Colorado as some districts may see an advantage of more training time as each area reopens, but I do think it is unusual it is not the district or even the PIAA that can give teams the go-ahead to practice — but the state government. I think there are too many moving parts in Pennsylvania’s reopening strategy, and high school sports will suffer because of it.

After analyzing the responses from other states, I’m overall pleased with the way CHSAA handled the last three months in comparison to other state associations. It has given timely updates and, for the most part, has been transparent about its decisions. I believe the addition of the resocialization task force will prove to be vital in the coming months as coaches, parents and players need to navigate through uncharted territory.

Jake Adams, The Carlisle Sentinel (Pennsylvania): PIAA has been unwilling to divulge much about its planning process, but that’s by design. PIAA executive director Dr. Robert Lombardi specifically cited the outrage in Massachusetts when its sports governing body came out with plans to get spring sports back, only for Gov. Charlie Baker to shut schools down shortly after for the rest of the academic calendar. PIAA’s tight-lipped approach is maddening, but it wants to be able to release a (hopefully) comprehensive plan when the time comes rather than constantly releasing a stream of ever-changing ideas like we’ve seen on the pro level.

I’ll also say the PIAA really has no other choice but to allow a staggered reopening. There’s no guarantee Philadelphia teams can return to competition anytime soon — and I would argue Philly shouldn’t get the green light for high school sports for many months. The PIAA wants to give as many teams a chance to get in any sort of season; the other details (ie: postseason) can be figured out later.

I applaud CHSAA for creating a taskforce that includes medical professionals to develop a course of action. More states should do that, including Pennsylvania and Alabama. That’s also difficult for some associations that aren’t as big as CHSAA. Alabama is at an advantage with significantly fewer confirmed cases (16,262 as of Thursday per the Centers for Disease Control and Prevention) and deaths (584), nearly half that of Colorado, which is nearly a third of Pennsylvania.

I side with caution and an abundance of it when it comes to a situation that could endanger thousands of teenage student-athletes, hundreds of coaches and all of their families. I know there’s been building fury in the Keystone State about the PIAA’s timeline, but it is interesting to see they are roughly smack in the middle of the country. And I find it interesting Alabama and Colorado, diametrical politically and not all that comparable in COVID-19 cases, are tracking similarly — both set to return June 1.

It’s far too soon to grade any of the states’ approaches. We won’t know how they truly handled this time for another year or more. For now.

With Alabama seeming to be the most gung-ho about reopening, it seems ironic the AHSAA made the decision to cancel the spring season two weeks earlier than the PIAA and nearly a month before CHSAA. But Alabama’s timeline was accelerated for one main reason — spring sports were in full swing here, with most teams starting to think about area play. Colorado and Pennsylvania, meanwhile, were still dealing with if they should postpone winter championships.

During the in-between time, I continue to applaud how the AHSAA handled the situation. Whereas the PIAA was mostly quiet, the AHSAA and CHSAA seemed to have regular updates about what was allowed and what was discouraged.

Like Alabama, both Colorado and Pennsylvania’s athletic associations have been guided much by what their state governments have allowed. The biggest worry I see with Pennsylvania’s phased reopening is the creation of unfair advantages for teams who could be forced to start much later than others.

In high school athletics, the No. 1 priority needs to be the safety of student-athletes. There’s a balance between the worry of contracting the coronavirus and things becoming unsafe for athletes in terms of injury and heat concerns in Alabama. Officials are balancing that much differently and it remains to be seen which strategy will work best toward the ultimate goal of resuming sports as we know them.

For more information on each state's closing date and latest update on reopening, view this state-by-state comparison chart: 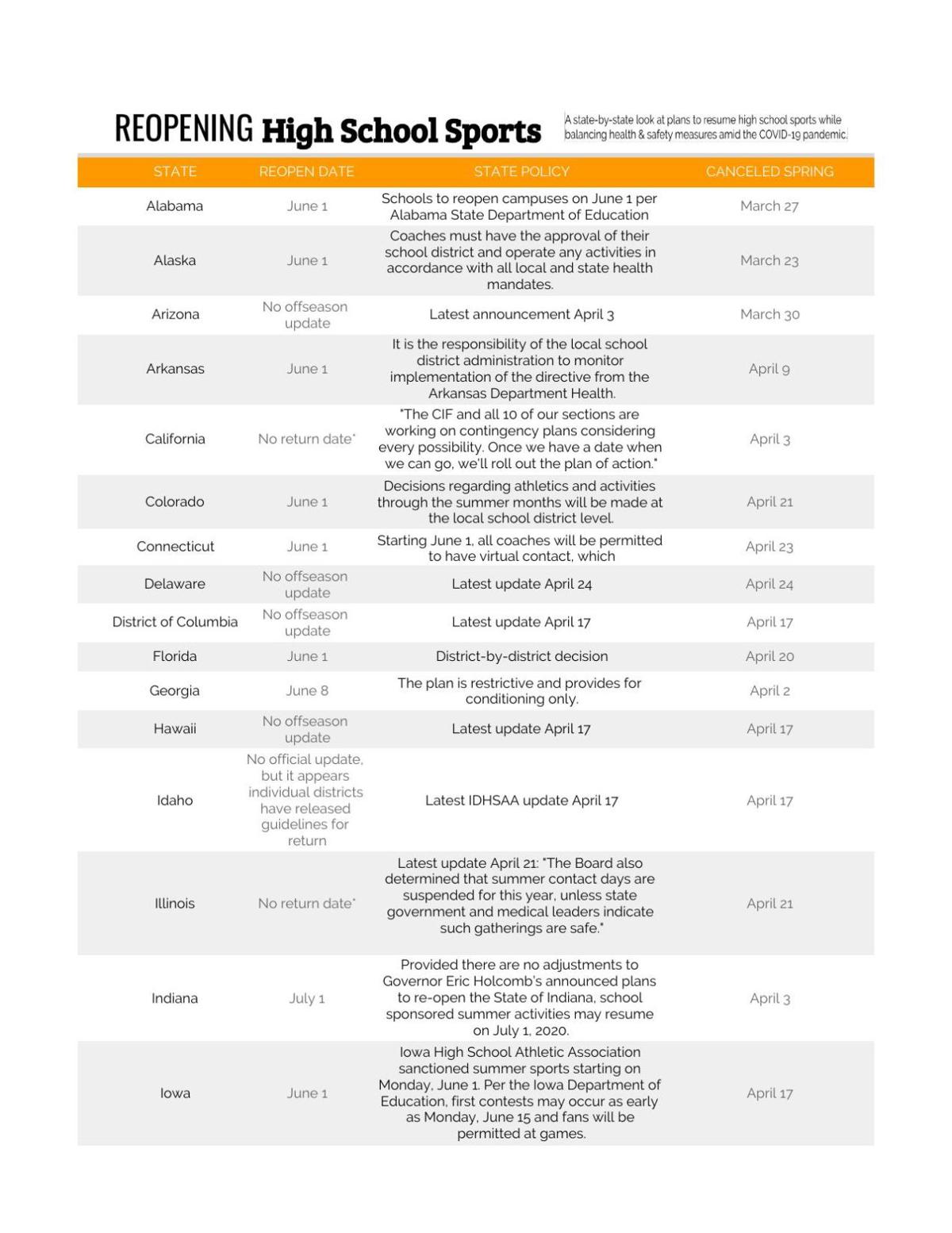