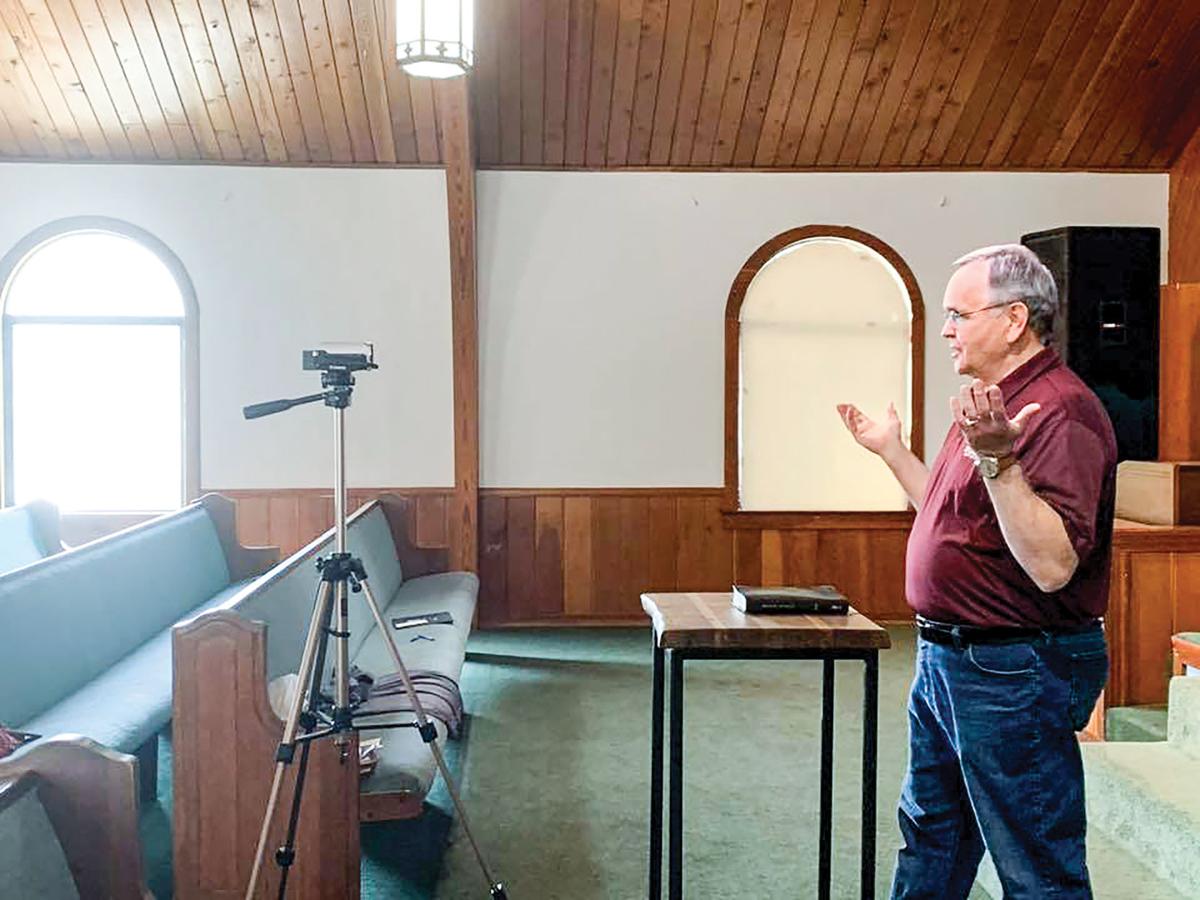 Submitted / The Outlook Dr. Gerald Hallmark records a worship service for his congregation to view on YouTube on Sunday morning. 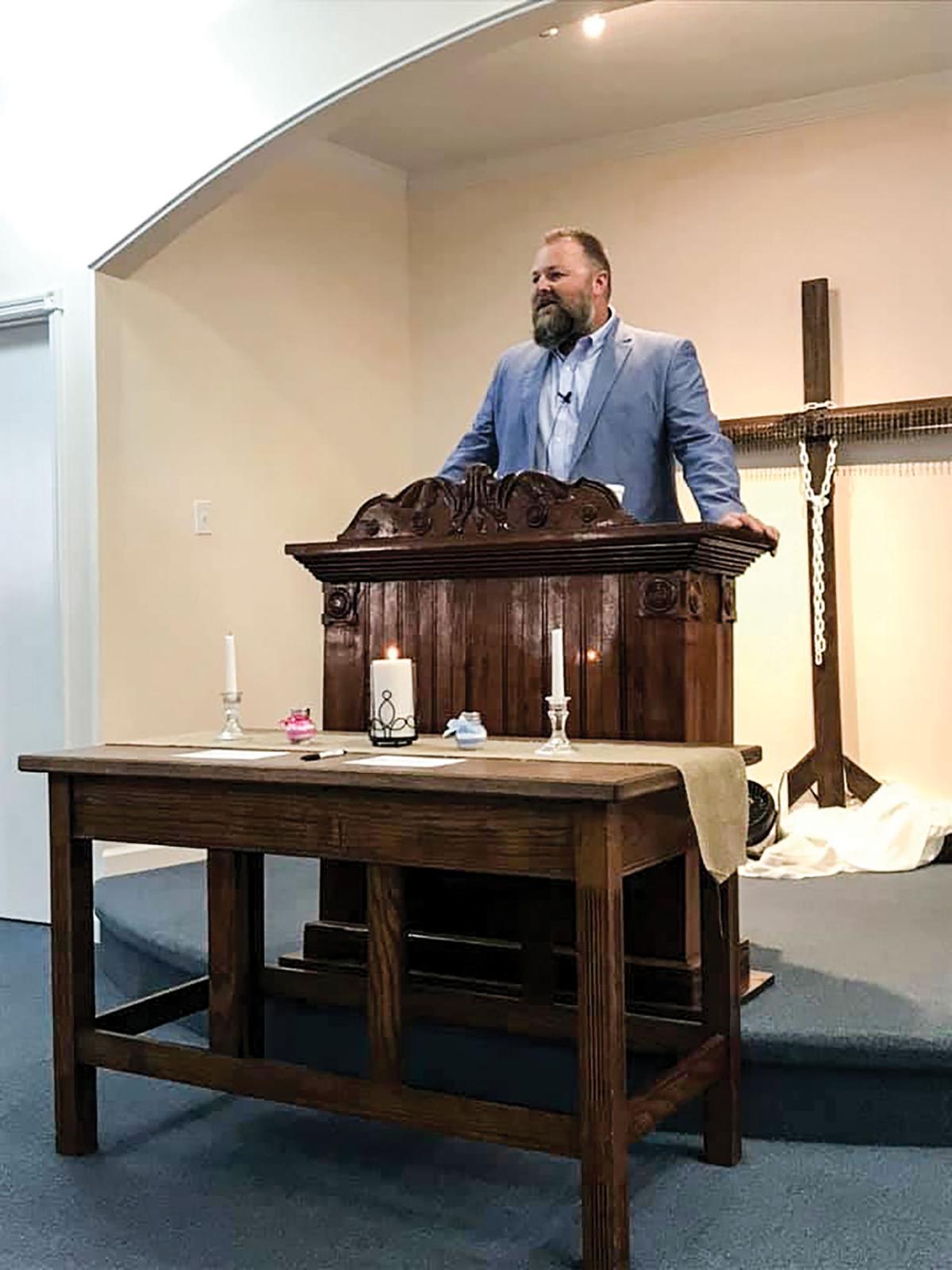 Submitted / The Outlook Dr. Gerald Hallmark records a worship service for his congregation to view on YouTube on Sunday morning.

For most, it’s been about a week since churches had to shut their doors to public gatherings based on Gov. Kay Ivey’s mandate that restricts gatherings of more than 25 people to help prevent the spread of COVID-19, although some had been doing so prior to the statewide mandate.

While some churches already had streaming efforts in place, others are tackling a new system and they are learning as they go.

“We had been streaming for a while, so it was already in place to do that,” Bethel Baptist pastor Andy Kinman said. “This Sunday was the first one with no one here, following the governor’s public health order. It was hard on my end and really awkward. I was literally the only person in the sanctuary.”

Right now, Kinman is live streaming his sermons at 10 a.m. Sundays, and they last about 30 minutes. The channel is youtube.com/bethelbaptist2012.

“I will say the one positive aspect of it is we’ve reached more people than we normally would,” Kinman said. “If we have to sacrifice this current discomfort to reach more people that’s a good thing.”

Kinman is focusing his messages on encouragement and positivity amid the difficult times facing the community.

“Let’s look at the positive sides and grow from this to better this community and the state and the world in general,” Kinman said.

St. James Episcopal Church Rev. Rob Iler has taken virtual worship a step further and in conjunction with Sunday services, he is recording Wednesday healing services and informational videos, which can all be found at stjamesalexcity.com.

“We were getting ready to start streaming services anyway because we have a lot of shut-ins and those at nursing homes,” Iler said. “So this kind of forced our hand and I’m glad it did in that sense.”

Iler’s videos are pre-recorded so members can view them at their convenience. St. James Episcopal Church was directed by Bishop of Dieses of Alabama to not have gatherings or services until at least the end of April.

“This means during Holy Week, we could not be together as a body,” Iler said. “I am glad he let us know, so we can plan. We’re looking to step it up for Palm Sunday, Maundy Thursday and Good Friday.”

Iler ordered 500 personal communion kits, which include unopened cups of grape juice with a small wafer. He plans to bless them on the altar and distribute them to church members using all the necessary precautions.

“So on Easter morning, people can open up their Eucharist packages and they will be able to, as a body, take communion at the same time,” Iler said. “Communion is a big part of our Episcopal tradition.”

Also during Palm Sunday and Easter Sunday, Iler will add an organist to the services and a few people to do readings.

Church members have the option to take home books of common prayer the Episcopal Church uses, so they can have their own at-home services.

St. James also has enacted nine care groups of people clumped into various geographical areas so people can keep an eye on one another.

“They call and check in, so people are looking out for one another and reporting back to the church if they have needs,” Iler said.

“We’ve divided up the congregation and they touch base with their groups each week,” Cater said. “It’s worked amazing and we have found out a lot of things we could not have known otherwise.”

Cater has been streaming services since two Sundays ago through a variety of outlets because her church members vary in their social media use. She is sharing her message on Facebook live and just created a YouTube channel.

“We are also using Zoom heavily for different meetings,” Cater said. “We’re trying to work out Bible study and some Sunday school classes by Zoom too.”

Cater has an audio-visual team recording church services and it added a music component this Sunday.

“The AV team records the sermon and they post it on Facebook as well as the live video,” Cater said. “It has been phenomenal.”

Red Ridge UMC has not yet activated online giving but has provided ways to submit tithes. People can drop them by the church, mail offerings or use online bill pay through banks.

It’s not simply Sunday services being affected either.

“We had our first death in the congregation since this has happened,” Cater said. “Our care team that cares for the family when someone passes, they can’t do their thing. They can’t have a public funeral. It will just be graveside service with just family.”

Red Ridge members are offering to deliver medicine for people who use Jim’s Pharmacy in Dadeville and can’t leave their homes.

“We’re making adjustments and every day is a learning curve,” Cater said. “We can’t wait to see each other and we’re making the best of it and being creative to be able to keep us connected, which is wonderful.”