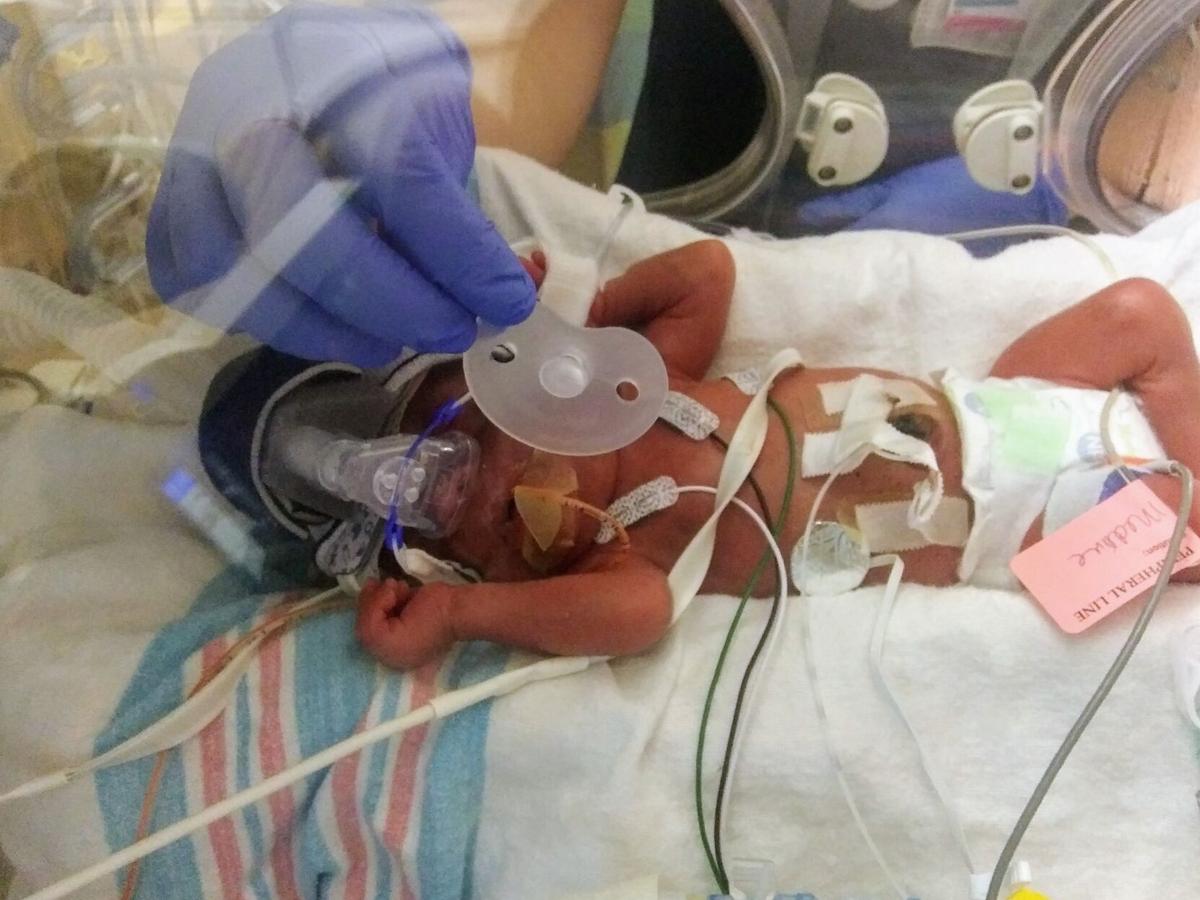 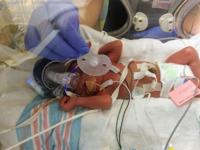 A picture of Madilynn on the day she was born three months early, weighing 1 lb. 13 oz. 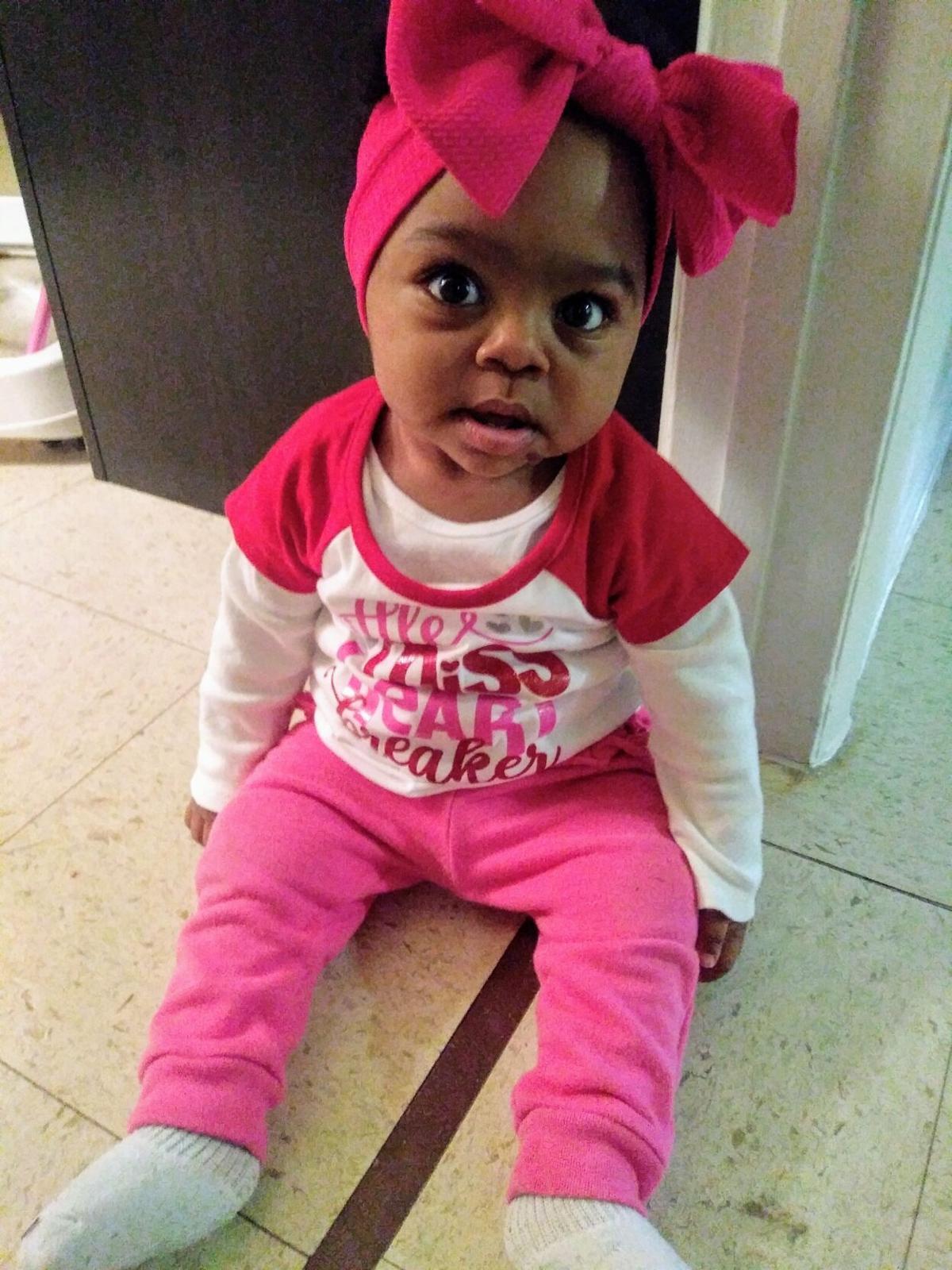 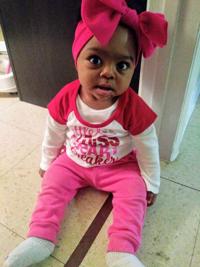 Madilynn is now 1-year-old and is a "wild child," her mother says. 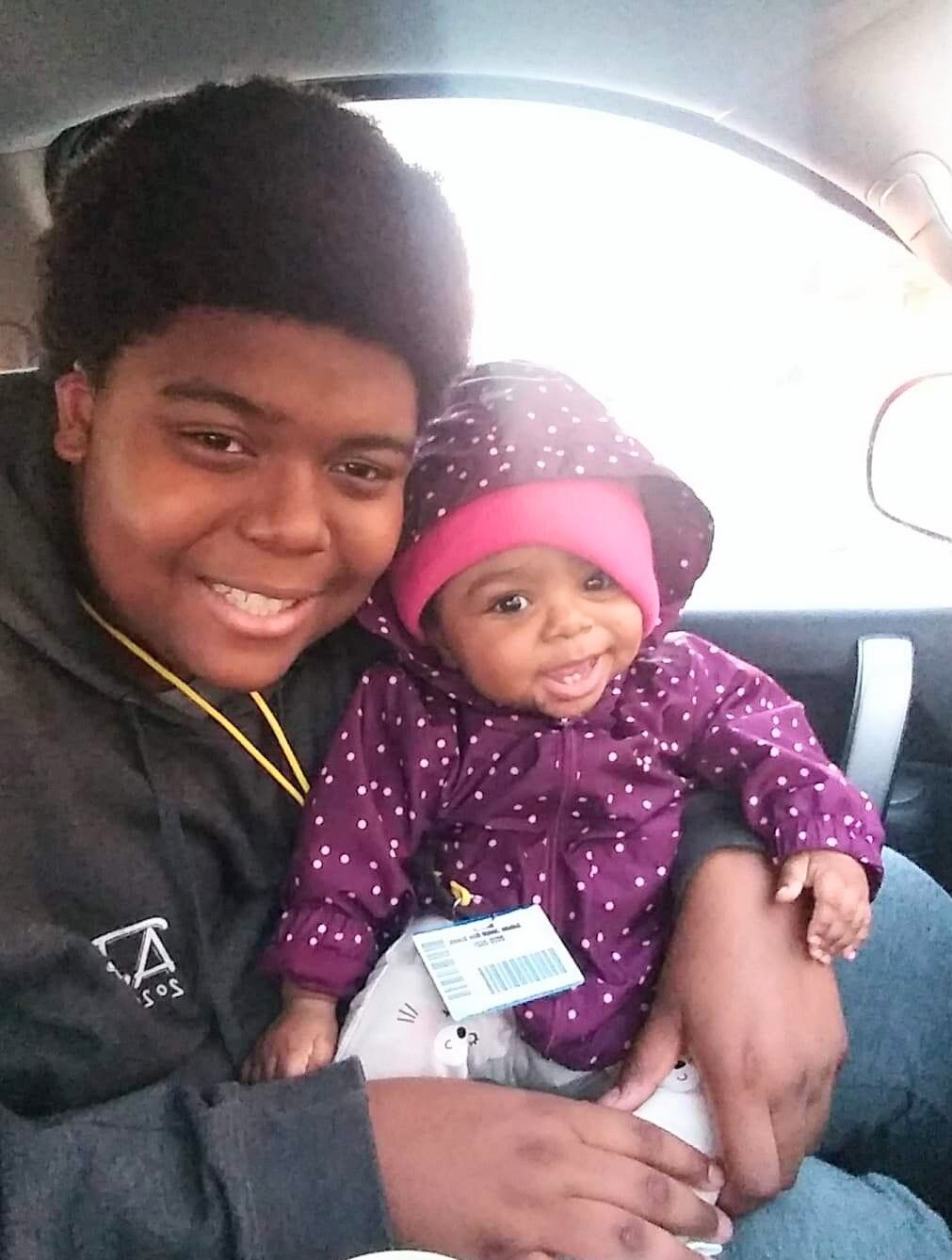 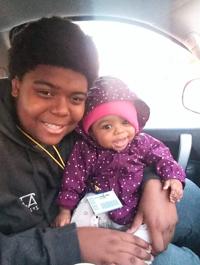 Madilynn, 1, poses with her brother Alexander, 14.

On the day Ashley Finley's water broke, she sat in the hospital bed googling, "do babies make it at 26 weeks?"

Finley, mother of 14-year-old Alexander, had already suffered the loss of a stillborn daughter at 24 weeks. After becoming pregnant again with Madilynn the following year, Finley counted down to the 24-week mark with trepidation.

While a problem in and of itself, low-weight births — defined as a child born below 5.5 lbs either prematurely or full-term — is also used as a proxy for the prosperity of a region due to its correlation with so many other adverse health and economic indicators. According to Montgomery nonprofit VOICES for Alabama's Children, Tallapoosa County ranks 66th out of the 67 Alabama counties for percentage of babies born at a healthy weight.

Tallapoosa County is also trending in the wrong direction — while the number of babies born each year is on the decline, the percentage of those babies born at low birthweight is on the rise. In 2018, the most recent year of data, 16.8% of babies were born underweight compared to 12.5% in 2008.

Risk factors include hypertension, poor maternal nutritional health, limited or lack of prenatal care, smoking or drinking during pregnancy and teenage pregnancies, Ruffin said. Premature and low-birthweight babies also have a high risk of birth defects due to not being fully developed yet — blindness, motor skill issues, brain defects, and developmental delays and cerebral palsy down the road.

Many babies' lungs also haven't finished developing yet. When Madilynn was born at UAB Hospital on Dec. 7, 2019, she spent the next three months in an incubator while Finley stayed at the Ronald McDonald House, a charity for families with sick children, across the street. Madilynn was still on supplemental oxygen when Finley took her home in March, which she stayed on every day until November.

Finley lives in Camp Hill, an hour and 45 minutes' drive from UAB's Women and Infants Center. She said the quality of care was worth the trek.

While Tallapoosa County ranks second to the bottom in Alabama for low birthweight, disparities also exist within the county.

"What's more interesting to me is the comparison between white children and African American/Black children," Woerner said.

Part of it is parents living in poverty, Woerner said, while part of it is "a lot of backstory on historic racism in medicine."

Finley, who is Black, was still a student at Troy University when she gave birth to Alexander, a healthy 8 lbs, 6oz.

"I took my son on my hip through college," she said.

By the time she was pregnant again in her 30s, Alexander was in his teens and they lived in Auburn. Finley went to see a private OB/GYN at East Alabama Medical Center who took Medicaid patients. Her experience there was not good.

"I'm a visual person, I observe a lot of stuff," Finley said. "I try not to, because I don't want to get myself anything to stress about, but in that situation when it was involving a child, I noticed it."

Finley took note of how the white doctor and staff spoke differently to the women coming in and out of the waiting room.

"I saw a lot of Hispanic mothers and maybe a few Black women there," Finley said. "And then you have the married white couples that come in. And the whole attitude, the whole vibe changed."

When Finley came with concerns about her hypothyroidism medication, the doctor told her to go home and stay off her feet. It was only later that Finley found out that the medication, Methimazole, led to pregnancy complications. Finley's doctor was also convinced that, due to her hypothyroidism, the pregnancy was doomed from the start. Not long before her miscarriage, Finley had a checkup in which her doctor declared "it's over" before walking out of the room.

Finley was in the process of trying to figure out how to switch doctors when her water broke at 24 weeks.

After she lost her daughter, Finley asked her OB/GYN if she should schedule a follow-up.

"They were like, 'No,'" she said. "I told my mom this is the worst experience I ever had. I didn't know to be angry, or just be so sad for my child that I let her down."

When Finley was pregnant with Madilynn a year later, she insisted on changing doctors. When her water broke at 26 weeks, the doctor sat down with Finley and asked what she wanted to talk about. Then the floodgates broke.

Whether it was God or "doctors that actually listened to me," Finley's second daughter made it. According to East Alabama Medical Center, Finley's previous OB/GYN retired last year.

While racism in medicine is hard to quantify, the racial disparity is visible in nearly every health outcome down to COVID-19, Woerner said.

"We don't track that," Woerner said. "But we do see impact of a medical system that doesn't look at Black mothers the same way they do other mothers in the data."

As for the rate of low-weight births in Black mothers versus white, the disparity is there across almost every county.

One step in addressing that is being proposed by state health officer Dr. Scott Harris as a line item in next year's Alabama Department of Public Health budget.

"Alabama does not have an office in the department of public health looking at equitable health outcomes," Woerner said. "Many, many, many states do."

The Alabama Office of Health Equity would cost $1 million and track both the data on racial disparities as well as the efficacy of any attempts to address it.

For Finley, having healthcare professionals that listened to her made all the difference.

At UAB, Madilynn spent several weeks in the incubator simulating the time she would have spent in the womb had she been full-term. Finley bought a pink-and-purple butterfly blanket to lay over the glass box.

"I figured if she ever opens (her eyes), I don't want her to just see a bunch of white, just machines, and wonder 'What in the world is going on?'" she said.

In her three months in Birmingham, Finley also had plenty of time to bond with the other mothers at the Women and Infants Center and to compare notes.

"There was a lot of single mamas there, which was OK because there's always somebody that had been through what you went through that can help," Finley said. "Like, 'Oh, we're on oxygen too. I do this with my child, you should try that ... Oh, we've done that last month. We went through that two months ago.'"

Unfortunately, there were always more babies than mothers present.

"We had babies that had been smoked on there or the mama was on drugs," she said.

When Finley and the other moms would make arts and crafts for the babies, the hospital would ask them to make extras.

"I was like 'I already don't like knitting and you make me do an extra project?' and they were like 'well we got mamas that don't come,'" she said. "We made a lot of extras."

Many of the women stay in touch with updates and birthday celebrations. As for Madilynn, at age one, she's at a healthy weight and has no signs of developmental delays, Finley said. When Madilynn naps, she puts her on a heart and oxygen monitor which goes around her little toe.

"We used to put it on her foot but she got to where she was kicking it off — she was stuck on the bed and then she'd pick until she got this thing off her foot," Finley said. "And I'm like, 'there's nothing wrong with this child.'"