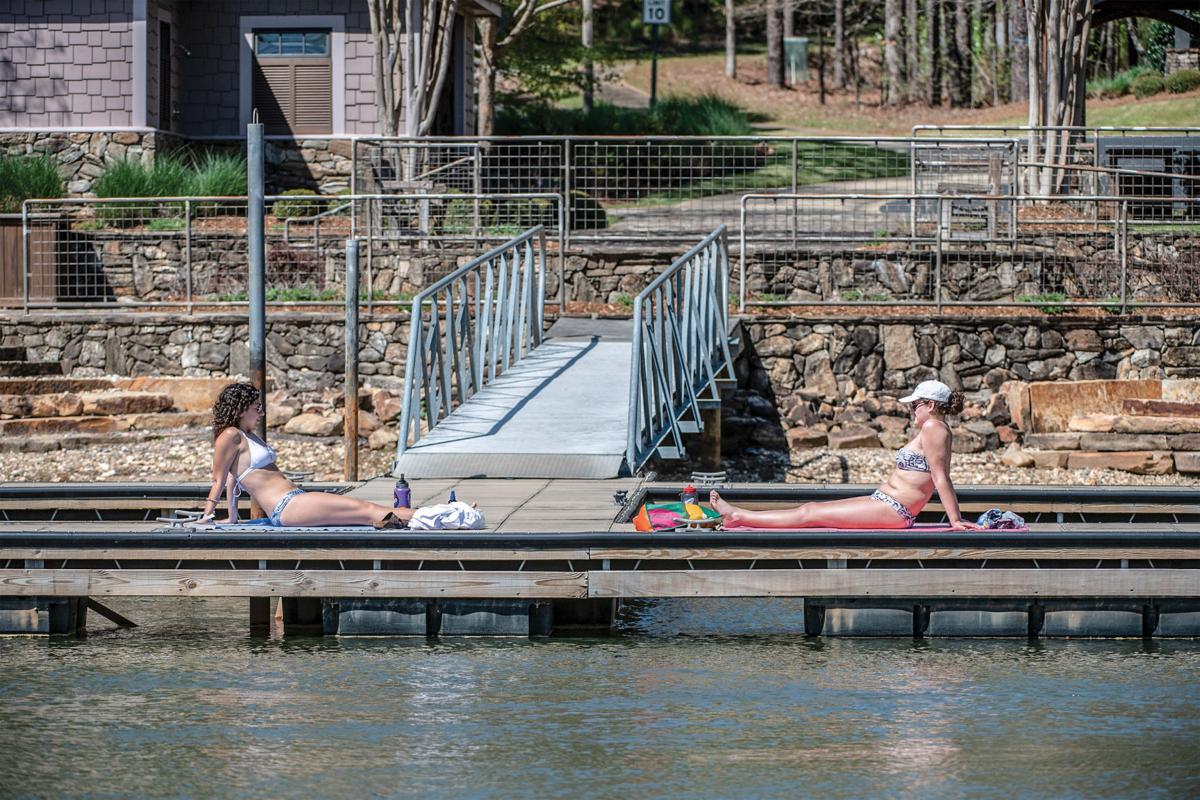 Many were spaced out from one another while soaking up sun rays this weekend at Lake Martin. 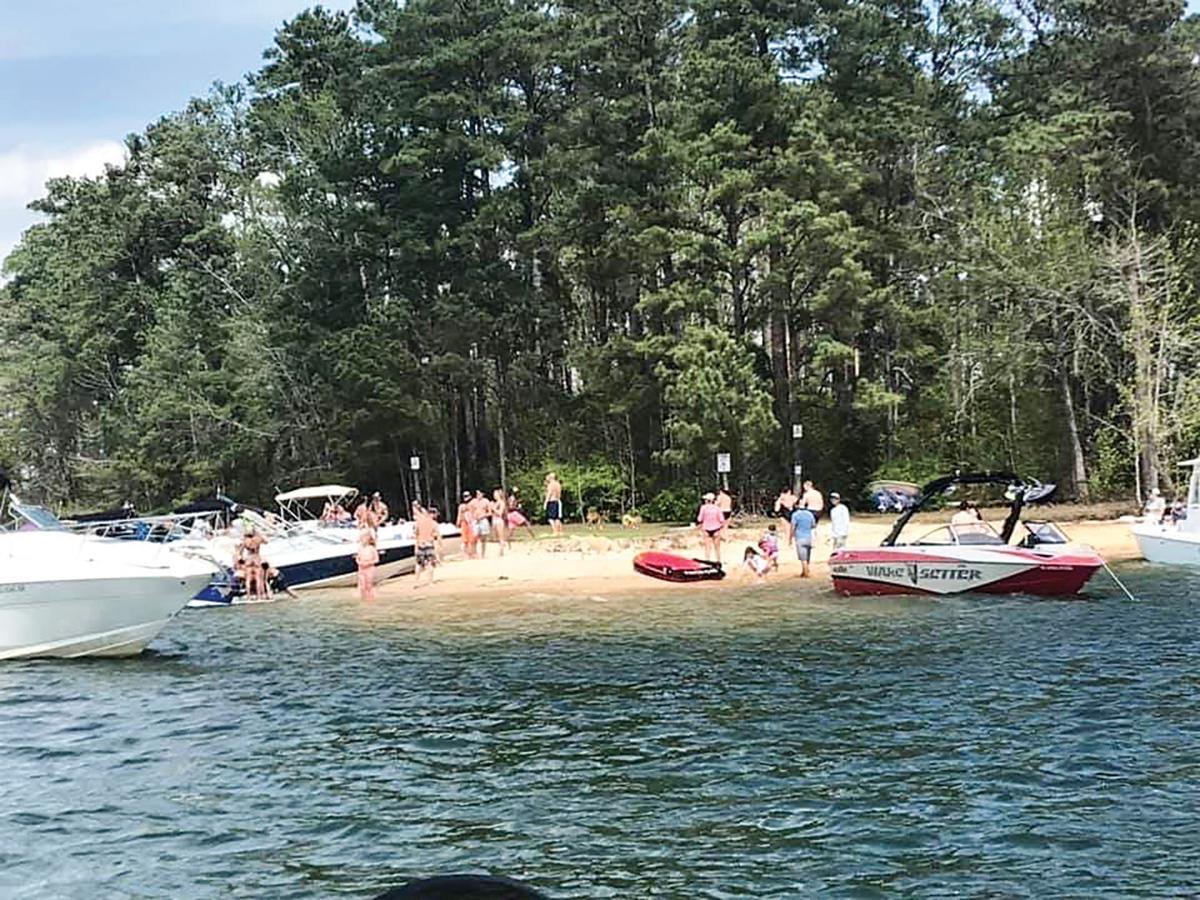 Many were spaced out from one another while soaking up sun rays this weekend at Lake Martin.

As restrictions tighten in an effort to stop the spread of the coronavirus, more people are left with nothing to do. In-school teaching has been canceled for the remainder of the school year; “nonessential” businesses have had to shut down; and even essential businesses must practice social distancing with employees and customers staying 6 feet from one another.

“Folks, don’t get out if you don’t have to,” Gov. Kay Ivey said in a video on her website Monday. “Staying at home does not mean inviting all your friends over. It means avoid interacting with others as much as possible.”

This is causing more people to be cooped up at home with nothing to do. Many are choosing to spend time outdoors or flock to homes on Lake Martin, causing some controversy.

“People around the lake are flying in their families from around the country,” Lake Martin Dock Company owner David McGirt said. “The chances of them bringing (the coronavirus) to this area is very high.”

McGirt said the biggest headache for his employees is now avoiding some local places they always went for lunch because of the influx of out-of-towners.

“Now it’s flooded with tourists,” he said. “And that’s putting their livelihood at jeopardy.”

Alabama Law Enforcement Agency’s Marine Patrol Division released a press release Sunday urging boaters and lake-goers to be safe on the water and follow the restrictions put in place by Ivey.

“Troopers are patrolling waterways daily, and they want everyone to have an enjoyable but safe time by adhering to Gov. Kay Ivey’s order as it relates to combating the spread of the virus,” the release read.

Some fear people arriving from more populated towns could put regular residents at a higher risk of contracting the virus but the best thing to do it to continue to follow the guidelines.

“First and foremost, people have every right to be here if they own property and have lake places,” Lake Martin Resource Association president John Thompson said. “They’re just here earlier. It’s like Memorial Day weekend just about every day.”

Families are experiencing cabin fever being isolated in their homes and trying to find ways to enjoy the outdoors and still spend time together.

“We want people to be able to get out and about,” Tallapoosa County tourism director Sandra Fuller said. “I don’t know how people can stay cooped up, provided they consider the 6-foot rule.”

Fuller recently posted a list of Tallapoosa County’s hiking trails as an idea for getting some fresh air. As long as immediate family members stick together, it’s OK because they’re already in contact with one another at home.

“They think if they’re outside, they’re fine but they still need to keep their distance,” Fuller said. “The lake is important and a huge tourism draw. I do understand the severity of the virus but I also know we can’t all just stay inside for one or two months.”

McGirt has stayed busy with work as more people are requesting their docks get repaired or built before Memorial Day and he has seen plenty of people on the lake not abiding by the rules.

“Boats are full,” McGirt said. “I literally don’t think it has sunk in. People think it’s a vacation with houses full of people, hanging out together, going out to get gas and food; there’s obviously no social distancing. It’s like they just don’t care.

“In all fairness this hasn’t happened in any of our lifetimes, so I get it but at some point you need to have some responsibility.”

Thompson has noticed in increase in the number of fishermen, as well as people getting out to pick up trash.

“Barbara Sokol posted on Facebook that she and her family went over to Hillabee Creek, which is always a dump, and started cleaning it up,” Thompson said. “I think that’s noteworthy. The more we can say about that the more we can encourage other to do the same.”

“We never board someone else’s boat,” Gilliland said. “We handle our own ropes and the people we’re helping don’t have to touch anything or sign any paperwork. We’re keeping our distance and supplying our boats with wipes and sanitizer; we’re on the up and up.”

Gilliland has certainly seen an increase of boat traffic in the last few weeks and he is getting calls on all the lakes he covers.

“We’ve been really busy, so it kind of started summer early,” Gilliland said. “We’ve already got two boats on the water and done a lot of jobs.”

The majority of people he’s seen are following guidelines.

“From what I’m seeing, 90% of people are being responsible, staying in small groups or with immediate family,” Gilliland said.

Fuller said, “There is always going to be a group of people not paying attention or follow the rules. I don’t know how you keep them from that.”

For those who choose to take our their boats, Thompson urges people to be extra careful.

“The concern we had for this increases boating activity is that the lake still has so much debris from all the heavy rains,” he said. “There are logs, building materials. We saw a lot of that when we went out on the buoy boat.”

LMRA’s buoy team has a long list of buoys — regular and lighted — that need to be replaced due to damage.

“It’s hard to say when they were hit,” Thompson said. “We already had a pretty good list of damaged one from the lake coming up with heavy rain but we’re finding as we’re going out, more have kind of moved around and shifted. Maybe from boats getting too close or as a result of the rising water the way it did.”

While the increase in population around the Lake Martin area is adding to the local economy, as a whole things are still taking a hit.

“It’s certainly hitting the tourism industry,” Fuller said. “I don’t know how long people can stay inside and not get out. We all have to be very careful though. I get the fear of what they feel about the lake but be respectful of others. If we can just follow these rules for the time period they’re asking, we can help flatten that curve; we’re all on a different point on the curve.”

Ivey said, “Everyone and every age is vulnerable and we need all our people of all ages to start thinking about others — many that you love and care for — even if you aren’t thinking of yourself.”