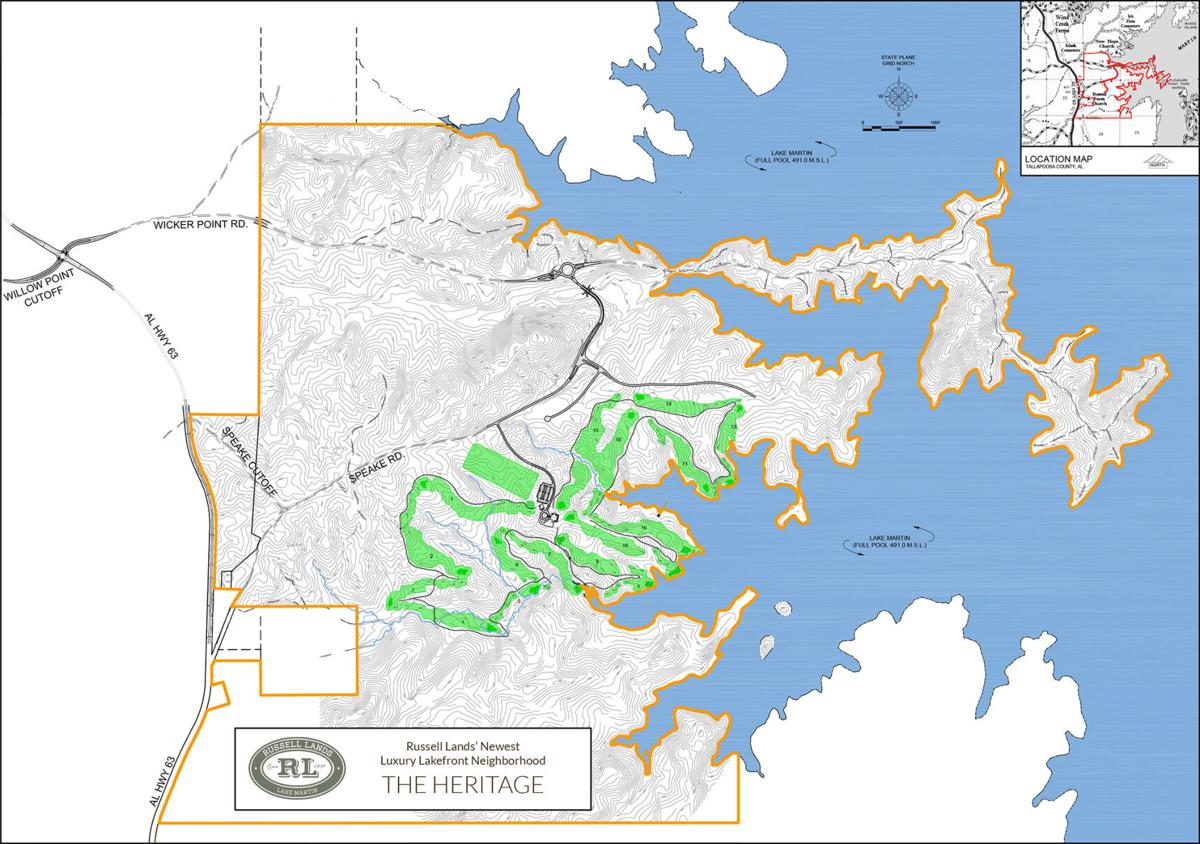 Plans are for the golf course to use about 250 acres of the 1,500 acre development. It will be about the same size as the other Russell Lands golf course at Willow Point but will not include tennis courts or a pool.

Wicker Point is pictured from the air. Russell Lands is developing the property into its newest neighborhood 'The Heritage.' A golf course is under construction in the 1,500 development within the city limits of Alexander City.

Wicker Point has long been appreciated for its natural rolling landscape with big water views on Lake Martin.

This week Russell Lands announced a golf course was under construction along portions of the natural area. The course with a planned opening in 2023 is being celebrated by government officials and golfers alike, especially since it will be a part of Russell Lands latest development, ‘The Heritage.’

“As a lake lover myself, I am thrilled to see the addition of a premier golf course to anchor this neighborhood here at Lake Martin,” Gov. Kay Ivey said in a statement. “Not only will folks be able to enjoy being at the lake with family and friends, they will soon be able to play a round of golf too. Our golf fans will appreciate the top-of-the-line work, and I am glad to see this project adding to our already beloved Lake Martin. Alabama continues to be a great place to live, work and play.”

Russell Lands has owned much of the area since Lake Martin formed almost 100 years ago. Just last year 1,500 acres and miles of shoreline were annexed by Alexander City as Russell Lands announced plans of a new residential development. Alexander City and Tallapoosa County officials are happy to see the project moving forward.

“They are one of the premiere in the world as far as building golf courses,” Jennings said. “In fact at the moment they are probably the most sought after as far as architects. The great reason is Crenshaw is such a relative player. He is not like Bryson DeChambeau where he feels like every drive needs to be 340 yards. He understands what challenges the everyday golfer. It just makes for a great fit for a golf course.”

Jennings said he has seen plans for the course and it is difficult to determine from a two-dimensional drawing just how good the golf course will be but he likes what he sees so far.

“Looking at the plans, it looks like it is going to be extremely playable but challenging to all golfers of all levels,” Jennings said. “It will force a golfer to decide, how far do you hit it?

“I’ve seen the layout and it is just going to be outstanding. It will be right there with Willow Point as far as the top golf courses in Alabama.”

Jennings said as earthmovers with Landscapes Unlimited move dirt, the course will come to life and not always exactly as planned.

“One of the biggest things they have to decide besides putting out fairways and penalty areas, bunkers and greens and tees, they have to watch how water actually does flow once they lay the land,” Jennings said. “You have a good idea when you have trees there and rocks and rough areas — natural areas. When you remove a lot of that and then you put in just grass alone, sometimes it alters the waterflow but these guys are not rookies. They have done it before and seen it all. I see nothing but spectacular things to come.”

Jennings considers the course at Willow Point and considers it one of the top four courses in the state. Just from what Jennings has seen in the plans, knowing kind of how the Wicker Point property lays with rolling hills and just being natural and how Coore & Crenshaw uses natural attributes in its courses, the new course should be like Willow Point.

Jennings believes the new Russell Lands course and the other courses already online in the area will have the golfing world talking about golf in the Lake Martin area.

“Good golfers want to play good golf courses; golfers, they love to tell stories about great golf courses that they have played,” Jennings said. “They love to talk about playing St. Andrews, Pebble Beach and that sort of thing. In the Southeast anybody that has ever played Willow Point, they leave there with just a great experience and memory and they pass it around. I just can’t help but feel like with our community, and as warm and welcoming as we are, that we will give a good experience to anybody who visits the area.”

Russell Lands vice president Roger Holliday said no plats have been finalized for the residential areas of the development but he expects several phases of development with about 200 lake front homes with 200 or more interior lots.

Alexander City Mayor Woody Baird sees potential in The Heritage development along with the golf course already under way.

“Having this new development in our city limits will fuel growth for our city and the entire region,” Baird said.

Jennings said he sees the entire development as a way to help surrounding areas improve.

“I’m super excited, proud of Russell Lands for making this happen,” Jennings said. “What I think it will do for our community is it will be fantastic for Alexander City. It will be another resource for employment, as well as bringing outside monies into our area.”