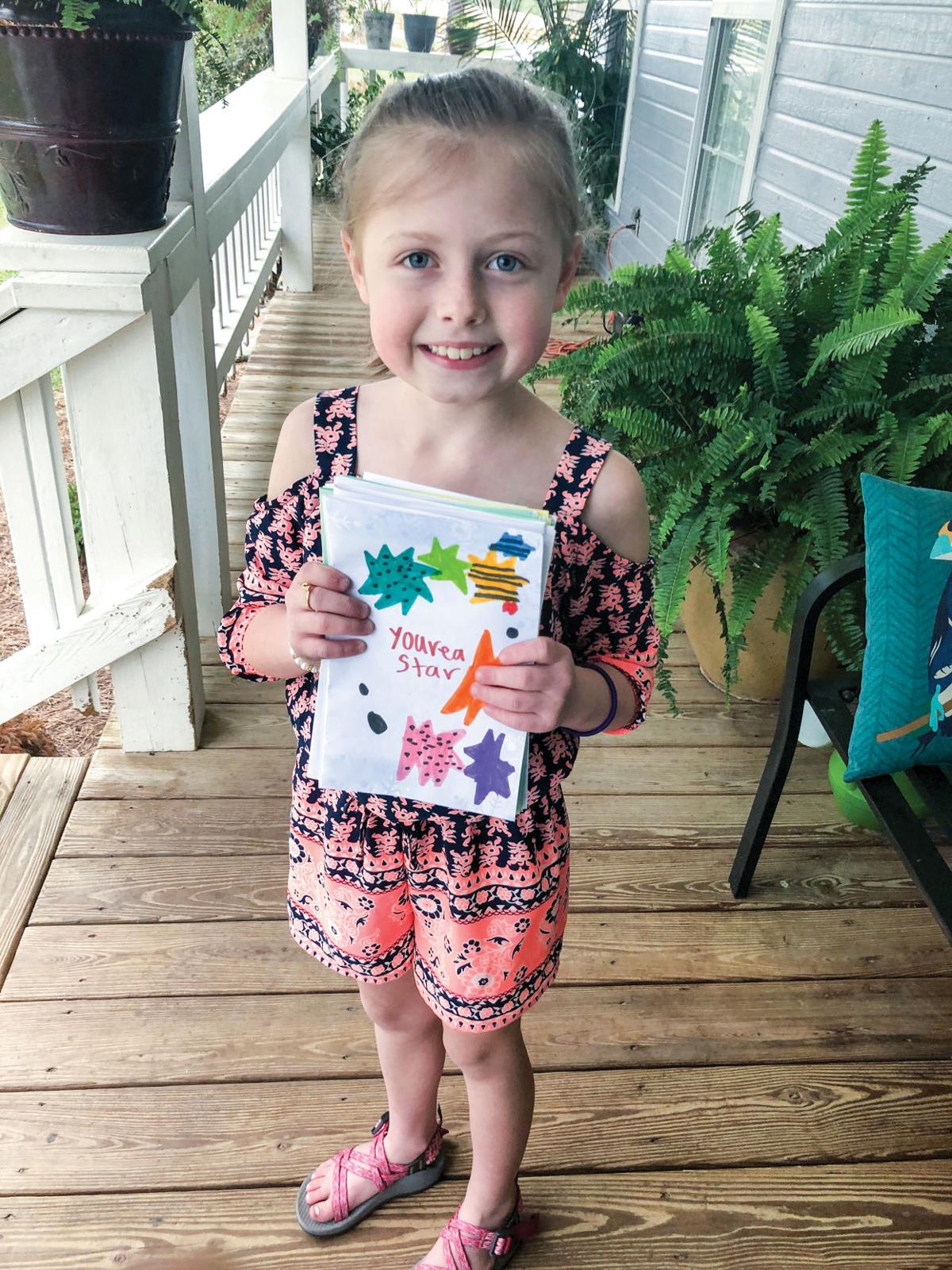 Submitted / The Outlook Ralee Windsor was inspired to make homemade greeting cards for seniors at Chapman's Nursing Home after learning they could not have visitors during the coronavirus outbreak. 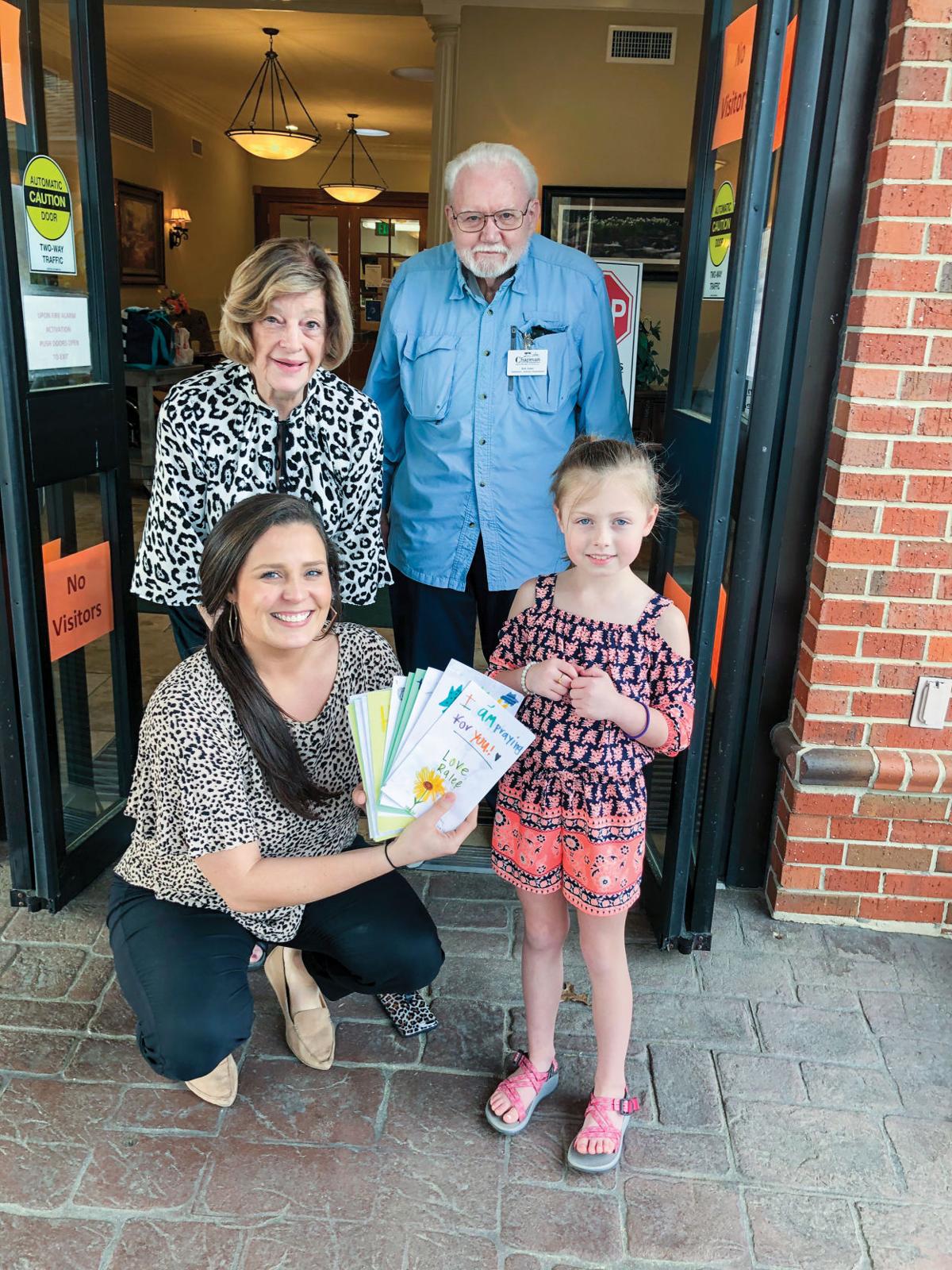 Submitted / The Outlook Jim Pearson student Ralee Windsor, front right, presented the staff at Chapman's Nursing Home presented 23 cards to be given to residents to lift their spirits.

Submitted / The Outlook Ralee Windsor was inspired to make homemade greeting cards for seniors at Chapman's Nursing Home after learning they could not have visitors during the coronavirus outbreak.

Submitted / The Outlook Jim Pearson student Ralee Windsor, front right, presented the staff at Chapman's Nursing Home presented 23 cards to be given to residents to lift their spirits.

Jim Pearson second-grader Ralee Windsor has a heart of gold, an old soul and a beautiful spirit according to her grandmother Alexander City resident Angela Windsor. Ralee was inspired to cheer up residents of Chapman’s Nursing Home after learning they weren’t allow any visitors and hand drew 23 inspirational, colorful and heartfelt cards for them.

This Friday should have been Ralee’s eighth birthday party but her family had to postpone due to the coronavirus restrictions. While she was upset for a minute, Windsor said, Ralee gathered herself and decided to put the focus on others.

“I see so much of my mother in Ralee,” Windsor said.

Monday would have been Windsor’s mother’s birthday, but she died in August. Ralee spent summers playing with Windsor’s mother. When her dementia got more severe and she was moved to a nursing home, Ralee went go with Windsor to visit her. The two still visit some close friends who are there now. When she learned not even family was allowed to see nursing home residents, Ralee wanted to cheer them up.

“She said, ‘I love to draw and I love my new marker set I got for Christmas. Can we make cards for them?’” Windsor said. “I almost started weeping when she said that. She then sat down for 2 1/2 hours Friday and drew cards for the residents.”

Messages included, ‘You are my sunshine,’ Bible verses and bright drawings of the sun, caterpillars, flowers and more.

“She asked me how to spell ‘important,’” Windsor said. “So one card said, ‘You are special. You are important. You are loved.’ And I promise you, she is coming up with these things on her own.”

Ralee and Windsor delivered the unnamed cards to Chapman’s on Friday and staff members greeted them outside to receive the special sentiments.

“Debbie Chapman called me later and was sorry she had been on the floor when we came by,” Windsor said. “She said, ‘You should have seen the way the residents’ faces lit up when they got them.’”

Ralee stays with Windsor every other weekend while her mother works in Opelika, so on Sunday, she wanted to make cards specifically for friends she visits at Chapman’s.

“We have three ladies we know dearly, so Sunday we made cards for them,” Windsor said. “And then she made one more for Debbie Chapman. She said she wanted Miss Debbie to have one.”

The special card for Chapman included a picture of an angel and said, “Nurses are angels” and “I love you” on the inside. Windsor plans to bring these four cards to Chapman’s today.

“It’s so encouraging in the midst of all of our sadness,” Windsor said. “Kid’s can’t do things right now either yet they’re still thinking of others especially the most vulnerable in the nursing homes.”

To encourage each other, Windsor and Ralee repeat a verse that was one of Widnsor’s mother’s favorites.

“This too shall pass,” Windsor said. “Ralee told me, ‘I understand Gigi (Ralee’s nickname for her grandmother) this means this will go away and better times will be coming.’”

Since Ralee couldn’t make cards for every resident, she hopes other children will be inspired to do the same.

“While the kids are home, get out your markers and paper,” Windsor said. “Just think every nursing home in Alex City could get cards. Any little thing they can do helps.”