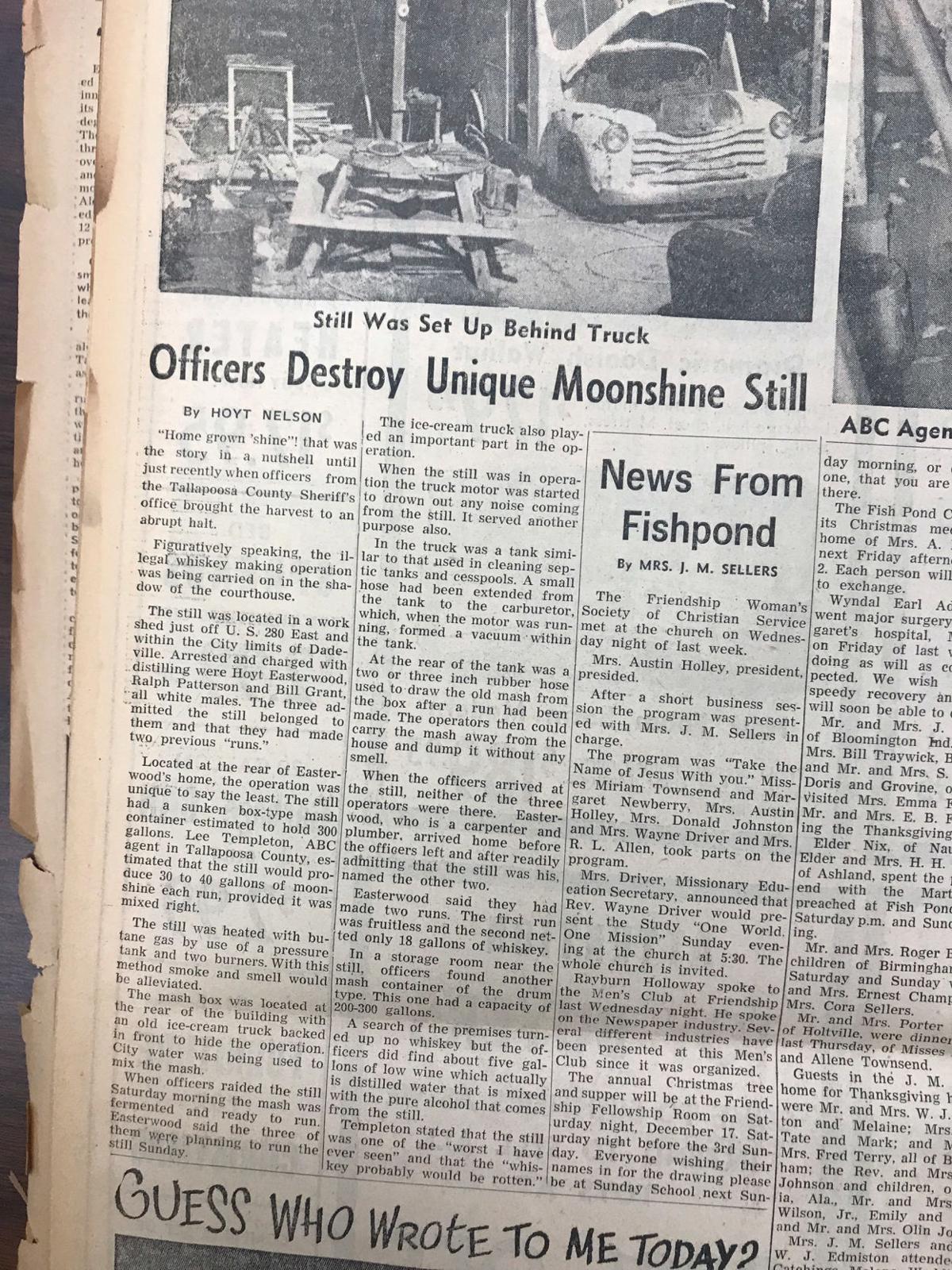 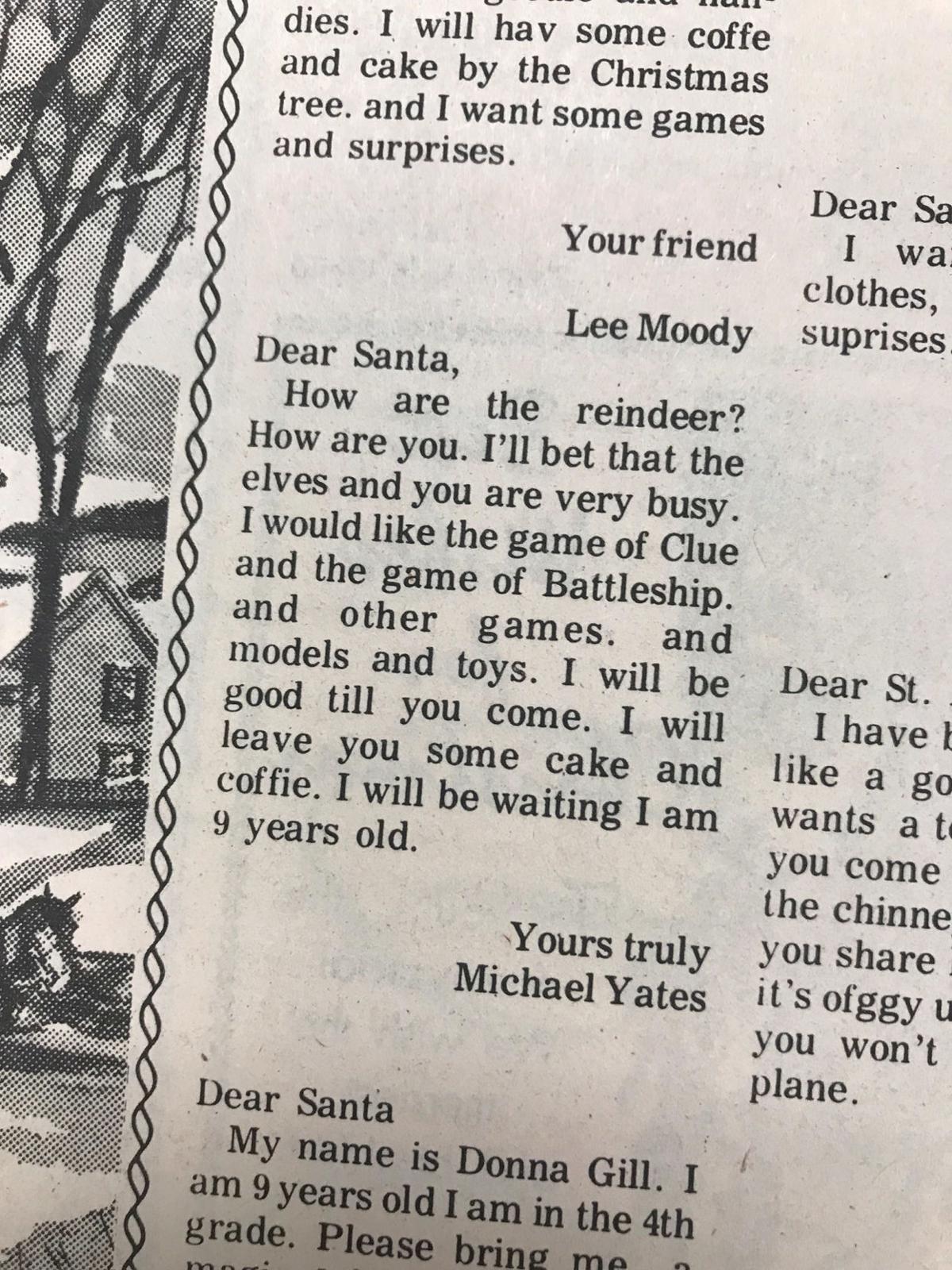 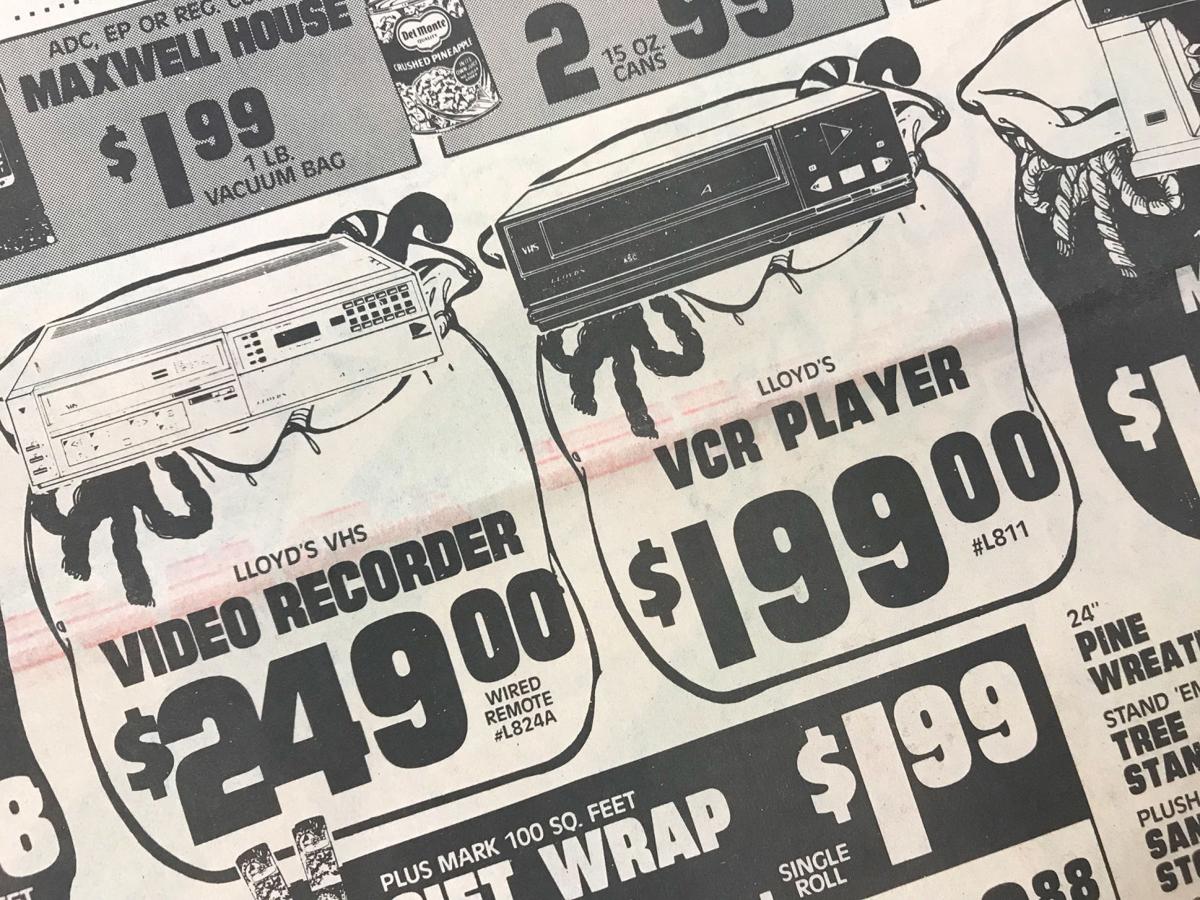 Parents might be struggling with wish lists from children this year.

Looking back through bound volumes of The Outlook, struggling parents might wish it was a few decades ago. In 1960 a 9-year-old Michael Yates wrote to Santa asking for a few basic board games like Clue and Battleship. You might think that was a long time ago, but what about 1985? Amy asked for only a Barbie.

One thing is common for all those who wrote to Santa – they all said they had been good or would be good.

Some of those parents might be wishing it five years ago when a beer truck spilled its load in front of Walmart. More than 10,000 cases of Miller Lite were cleaned from the roadway in the more than four hours which traffic was diverted in Walmart’s parking lot. The beer had to be disposed of and the area smelled of beer for days afterwards.

I can imagine a few cases were salvaged to drink over the following weeks.

I am proud of the technology we have today. We can just Google up and watch a movie on our phone. But for those parents wishing for simpler times to keep children outside and still keep a few modern advances, we only have to go back to 1985. B-Mart advertised a VCR for $249. You remember those VHS tapes and praying they didn’t break. Well this VCR even had a wired remote – fair warning you might have to move the couch closer to the television for it to reach.

The campaign advertisements are striking us today and candidates are stopping by to get us to vote for them. They did the same thing in 1979. A 25-year-old Robert Kennedy Jr. stopped in Alexander City for two days campaigning for his uncle Edward Kennedy who was running for president.

Crime seems to have changed from 1960. Today we have all sorts of murders and robberies. In 1960, law enforcement busted up an illegal moonshine still in a business just blocks from the courthouse in Dadeville. When found, it had made only two runs but was well thought out. The proprietors of the illegal whiskey operation had acquired an ice cream truck and backed it up to the business to cover up the operation, but the truck served a bigger purpose. It was to be used to carry off the used mash from the operation. The proprietors couldn’t just dump the fermented mixture as you could smell what was cooking.

While there may not be as many illegal whiskey operations, I can say some criminals are still quite smart. Then again this operation made only two runs so maybe there was something else they forgot about.

It does seem the saying history repeats itself is prevalent right here in Tallapoosa County.

Discussion has come up recently about raising the pay for the mayor of Alexander City. Well city leaders did such a thing in 1979. The pay for councilmembers was raised 33% from $150 a month to $200 per month. There at the time was paid $18,000 per year and the council voted an increase of $2,000 per year bringing the pay to a total of $20,000 per year.

While it is unknown what leaders will do with the pay for mayor, one thing is for sure it will come up again. When, I don’t know. If I could tell the future, I wouldn’t be writing this. I would be retired and living off lottery winnings. Oh yeah, Alabama doesn’t have the lottery. I’ll just be one of many to travel to a neighboring state to try my luck.

It seems every year residents are asking about roads being paved. In 1960 it was no different as the City of Alexander City received a grant to acquire paving materials for roads in the area.

Speaking of history repeating itself, in 2004 the State of Alabama reported identity theft was on the rise with 2,000 statewide cases. What would we say if there were only 2,000 cases a year now? I think we would say our information is pretty well safe guarded.

The fact is everyone’s information is at risk. The easiest solutions are to keep your information guarded, change passwords often and watch your financials to see if there are any irregularities. These aren’t the “good ole days” anymore.

In 1974 Lake Hill Restaurant’s special of the day was an 8-ounce filet steak with a baked potato and salad for $3.95. That is a good deal but what about this deal in 1979 at Darwin Dobbs, an advertisement said a Buick LeSabre could be bought for $7,449.

I don’t know about you but I think a time machine would be a good investment. Make money in 2019 and return to yesteryear with our cash to make purchases and bring them back. Talk about stretching your money.

That same year Alexander City received a grant to extend the runaway 1,000 feet to 4,700 feet.

Two large companies known to residents of Tallapoosa County were clients in 1979. Sears Roebuck was the world’s largest retailer and named Russell Corp. the winner of its “Symbol of Excellence” award winner. It was the eighth time in 14 years Russell Corp. received the award.

I remember the days of the Sears Wishbook and making a many Christmas wish lists. In fact, one of my favorite gifts ever was purchased from it. I remember my dad visiting Moore’s Hardware when it was on the square in Dadeville. It handled a lot of Sears catalog purchases. My dad got me a remote-controlled car. It is still in my parent’s home today.

Not so much can be said for Sears.

Speaking of old brands no longer seen, in 1985 Russell was still in its prime. It was big into Pop Warner football and was hosting the championships of it here in Alexander City.

In 1985 Joe Theisman was still playing for the Washington Redskins and came to town for the weekend for the three championship games. Theisman was joined by the likes of Bo Hopkins from “Dynasty,” Jim Fowler of Mutual of Omaha and Goofy to speak with the children that weekend.

While hotels were full, the athletes and coaches were housed at Camp ASCCA. Six teams competed in three age divisions. A team from Atlanta was a repeat champion in 1985.

Russell Corp. got special orders of teams wanting new jerseys, practice gear, sweats, T-shirts, jackets and oftentimes pants for the teams to wear for the bowl games. It always came through taking two to three weeks to complete the task and shipping the new look uniforms about Christmas to the teams.

1985 is also about the time I took notice of Russell Corp., especially a gray T-shirt. Talk about comfortable. I wish I had a few dozen of those I destroyed working around the house over the years.

Maybe it is time to invent the time machine. I’ll share it after I go to the future to get a few winning lottery numbers and go back to get the Buick LeSabre and those Russell T-shirts and sweats.

Cliff Williams is a staff writer for The Outlook.