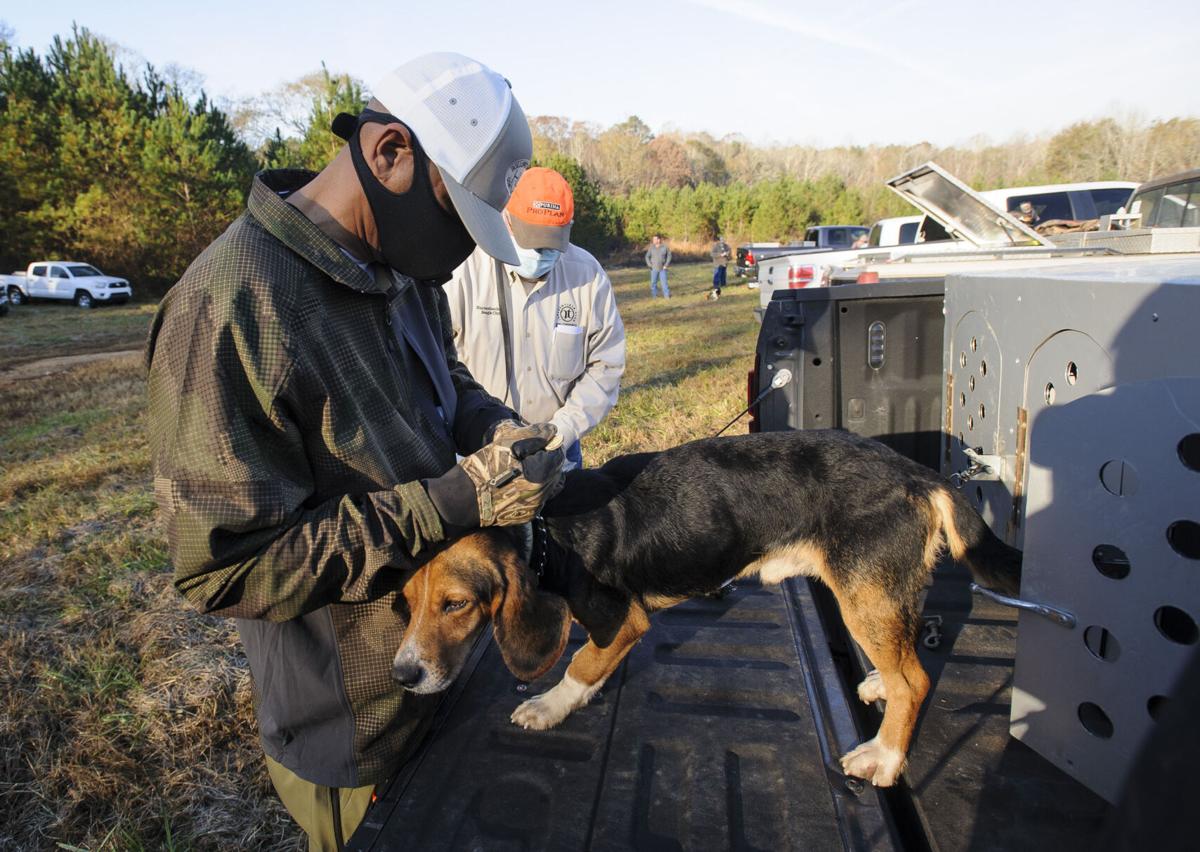 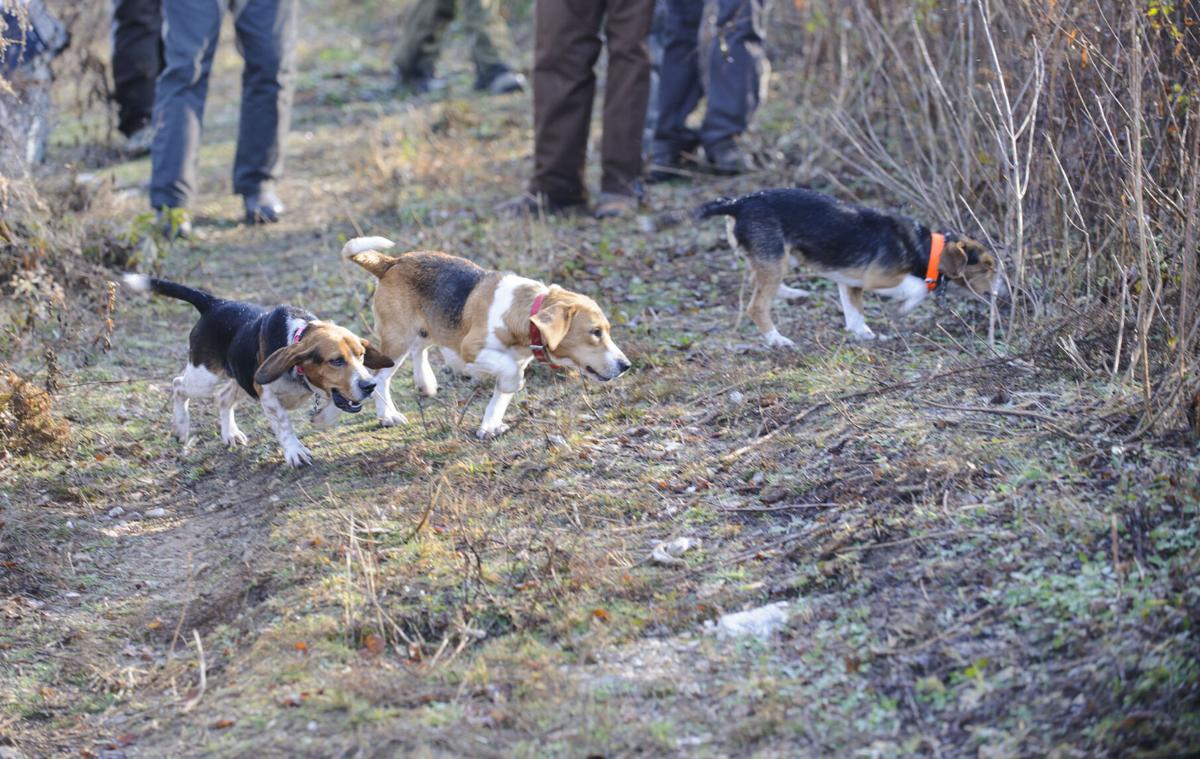 Cliff Williams / The Outlook Beagles on the trail of a rabbit at Horseshoe Bend Beagle Club Friday.

Cliff Williams / The Outlook Beagles on the trail of a rabbit at Horseshoe Bend Beagle Club Friday.

The bragging stops when the tailgate drops.

Beagle owners from near and far have paused the tales of what their dogs can do in the owner's mind to see what the dogs can do trailing rabbits. The Cloverleaf All Age Championships has returned to Eagle Creek’s Horseshoe Bend Beagle Club on property owned by Randy Moran for American Kennel Club (AKC) gundog field trials. The trial is no Westminster Dog Show and a dog’s look means little except for putting the animals into 13-inch and 15-inch classes.

“They can be purple or blue,” Moran said. “I don’t care as long as they can run a rabbit good.”

Eric Autry of Gainesville, Georgia is president of the Cloverleaf Beagle Gundog Association. Autry has served as a judge at more than a 100 field trials and said the event is nothing like the dog shows on television.

“This is the performance side of it; doing what they are bred to do,” Autry said. “They are just following their nose.”

The beagles are natural hunters, according to Autry.

“As a puppy they will basically start on their own,” Autry said. “It is bred into them so much that they do it naturally.”

Moran even has a 3-acre pen on his property set up just for training puppies.

“It’s just to get them started barking on a rabbit,” Moran said. “Then you move them out of there to the bigger pens.”

Moran’s 25-acre pens are where more than 100 beagles are running this weekend.

The first run of the day winded judge Nate Scoggins. The pack of seven male 15-inch beagles ran from the gate, circled the 25-acres and with several zig zags through brush and thorns.

“I think I’m going to start judging easier dogs,” Scoggins said catching his breath after scoring the first of several runs for the day. “These dogs ran the whole pen.”

Scoggins is running through the brush looking for something in the dogs. Autry said a judge is looking for a dog’s natural instinct and good dogs make few mistakes tracking rabbits.

“You want them to hunt; a good dog knows where to hunt,” Autry said. “If there is a brush pile, there is likely a rabbit in there. A good dog will usually go to something like that. Once they get the rabbit up, and its jumped, a dog should pursue with their nose. If it can hold onto the line and follow it with its nose without losing it, that is what you are looking for. If you have one that has more nose than brains, if the rabbit turns, they will just keep going. That is a fault.”

AKC hounds field director Mel Stewart finds himself at field trials a lot. Stewart himself raised and ran beagles in field trials and helped negotiate the rules with the AKC for the performance judging. Stewart has judged his fair share of field trials too.

“It is a huge sport from Maine all the way to Washington,” Stewart said. “We usually have by the end of the year something like 650 events.”

Stewart said training beagles for field trials is a great family sport. Friday several children were running through the pens and handling dogs.

“There will be even more (Saturday),” Moran said.

This year, the COVID-19 pandemic has kept Stewart a little closer to home just outside of Birmingham.

“I haven’t been catching those planes traveling to places like New York state, Massachusetts like I used to do a lot,” Stewart said.

Many of the events in the spring were canceled and rescheduled for the fall and early winter, forcing a decision for dog owners and handlers.

“We have them doubling up on events where we used to didn’t,” Stewart said. “Like this weekend, there is a big one in Louisiana. Usually a lot of those folks are here, or the folks here are there, but it is the nature of the beast.”

Moran was still happy to see his three dogs run with the help of partner Tim Holloway of Carrollton, Georgia.

“This is some real good competition here,” Moran said. “If you win here today, you have done something.”

“They have to have 120 points and three wins,” Moran said. “He just needs a first place to be a field champion.”

Moran said he and Holloway have won many field trials over the years and were even back to back national champions in the last few years.

The Moran-Holloway partnership started when Moran tried to purchase a dog from Holloway.

“We’ve been partners ever since,” Moran said. “I own the front half of the dog and he owns the back side.”

The partnership might be better described as an oil and water or brother and sister relationship.

“We are always riding each other about something,” Moran said. “It’s all in good fun and we would do anything for each other.”

The beagle world is like a fraternity. Moran led a prayer before Friday’s runs for Coker Bailey and his family who died this week. Bailey ran beagles with Moran and others gathered in Eagle Creek.

“We run a pile of dogs together,” Moran said. “I bet we wore out at least one pickup truck in the last 10 years.”

Moran set out a collection box to help with Bailey’s funeral expenses.

“If he were here, he would be the first to put something in the box,” Moran said. “He just looked out for everyone.”

Moran recalled a story of Bailey and himself competing in McComb, Mississippi.

“He rode with me,” Moran said. “I told him and the others there I would leave him if he beat me. He would have to walk. The other handlers said they would get him home. Coker picked up a sixth place and I won the thing.”

Moran said everyone enjoys a win, but something else is more important.

“We look out for each other,” Moran said. “When it gets to the final group in the pen, we may get a little grouchy with each other, but when it matters, we help each other.”

67°
Showers in the Vicinity

Scattered thunderstorms in the morning, then mainly cloudy late. High around 70F. Winds WNW at 5 to 10 mph. Chance of rain 40%.

Do you think the COVID-19 vaccine rollout has been effective in Alabama?