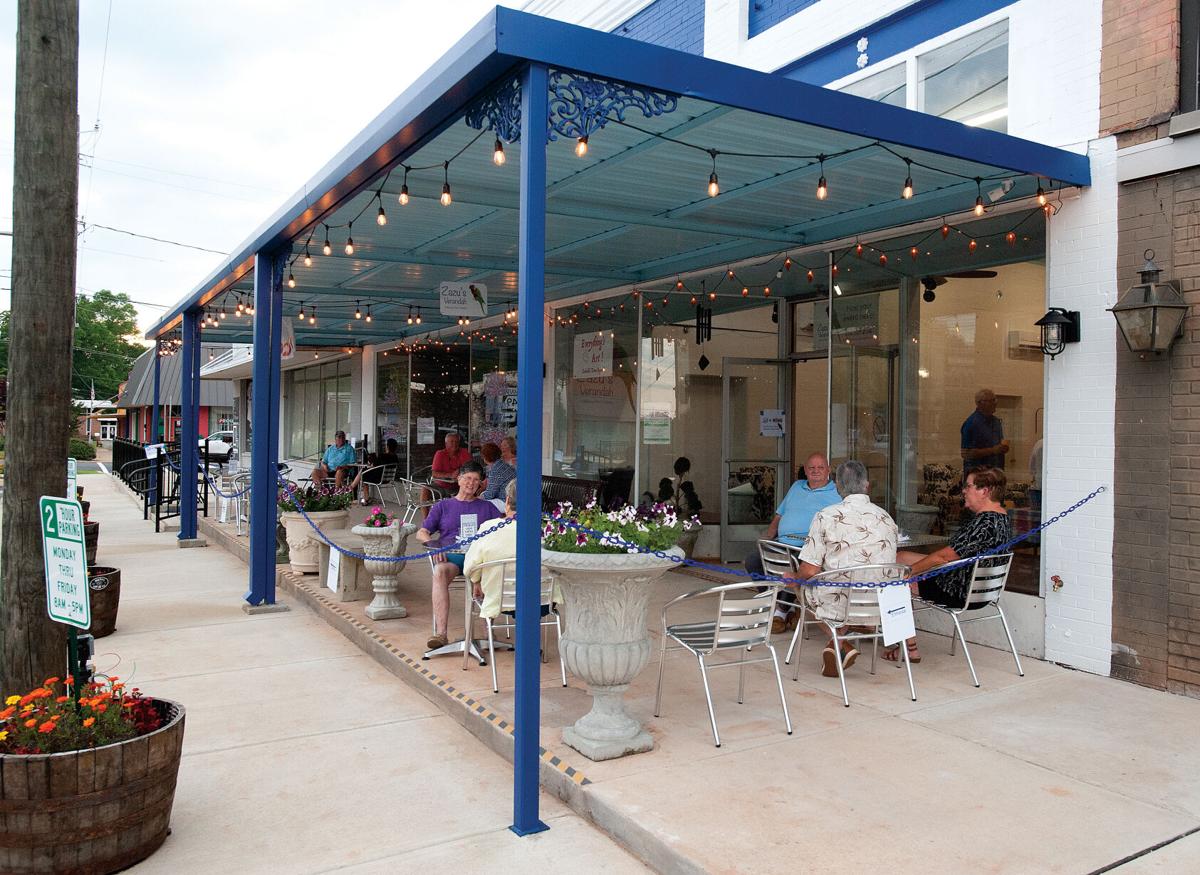 File / The Outlook Guests enjoy the canopy at Zazu Verandah on a Thursday night with music and art on the square. 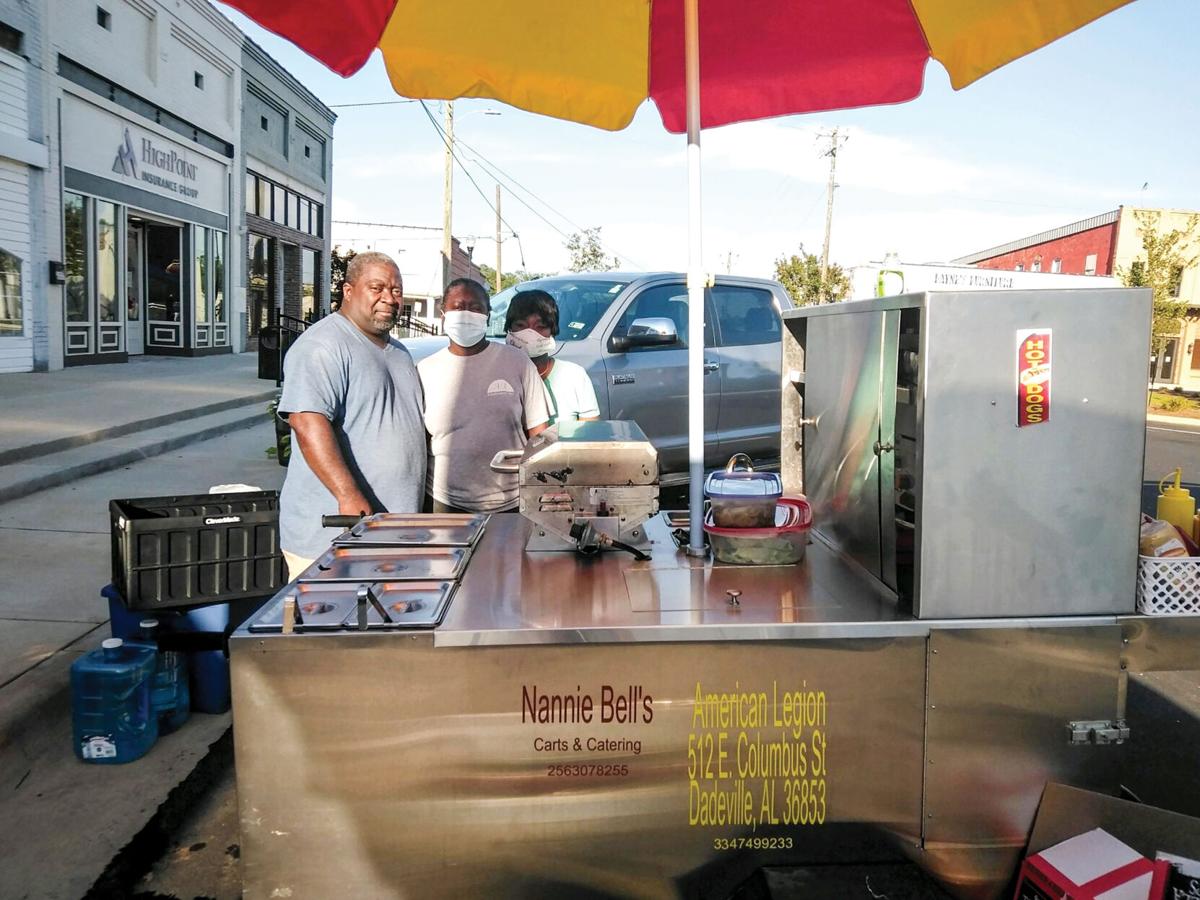 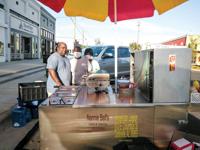 Julie Harbin / For The Outlook Nannie Bell’s catering cart made its appearance in Dadeville last fall and will be opening a storefront later this year in the building next to Zazu’s Verandah on courthouse square.

File / The Outlook Guests enjoy the canopy at Zazu Verandah on a Thursday night with music and art on the square.

Julie Harbin / For The Outlook Nannie Bell’s catering cart made its appearance in Dadeville last fall and will be opening a storefront later this year in the building next to Zazu’s Verandah on courthouse square.

Dadeville Mayor Wayne Smith is a strong proponent that “if you build it, they will come.” Nothing rings more true for Dadeville at this time than that sentiment.

With the transformation of the courthouse square and long-anticipated completion of the streetscape project, more businesses are popping up downtown and Smith is excited for the evolution.

“I want to keep things progressing; I don’t see anything but growth,” Smith said. “As a matter of fact, we’re expecting a pretty good little increase in expansion on one of our industries in town soon and there is some movement on other buildings around the square.”

The project not only solved directional traffic flow issues around the square but also trucks coming through Highway 49 can get through more quickly.

“We’re going to have a walkthrough in a couple weeks and we have a punch list of a few things that still need to be done,” Smith said. “Some little bumps and bruises as far as that goes.”

But it hasn’t stopped business from booming.

Zazu’s Verandah opened earlier this year as a community event center and hopefully a soon-to-be space for art classes. Owners Rick and Mitzy Hidding believe deeply in the growth of Dadeville and saw this as an opportunity to enhance the community and also be an affordable event space.

The 1914 building was originally Oliver’s Hardware and the couple found the original 9-foot tall doors they are refurbishing to use as barn office doors.

The Hiddings also launched Music on the Square encouraging residents to gather downtown and enjoy some live music, beverages from Zazu’s and the artwork in Raining Dogs Gallery around the corner.

“We’ve got Zazu’s Verandah opened; we’re having music on the square every Thursday sponsored by different groups and Raining Dogs Gallery — a New York-style gallery right on the square,” Smith said. “It’s exciting.”

Adjacent to Zazu’s and part of the same building, Nannie Bell’s Coffee Shop will be opening in a few months as a breakfast and lunch establishment.

Currently, owners Michelle and Reginald Hall own Nannie Bell’s Cart & Catering and they have been looking for a storefront.

“This has been a dream for us to open a coffee shop,” Michelle Hall said. “I actually met Rick (Hidding) first at the Christmas parade on the square and he took me over to show me (Zazu’s). It’s a beautiful area. He ended up trying one of my hot dogs and it went from there.”

“Right now we’re doing a lot of painting, cleaning up, redoing floors and installing all new equipment inside,” Hall said. “We’ll offer the same stuff we have on the cart; it will be all Category 2, which is all pre-cooked food.”

The hours of operation tentatively are 8 a.m. to 5 p.m. every day, switching to lunch items at 11 a.m.

“We’ll keep doing the mobile cart as well,” Hall said. “It’s been awesome and has really picked up. People are real excited about seeing the cart.”

The pull-behind sets up in different locations around town based on permits and Hall said she will even deliver food to customers who cannot get out of their homes or simply called after the cart had shut down.

Nannie Bell’s is named after Reginald’s grandmother who was a cook and Hall said she loves to cook as well.

“It inspired me to start somewhere trying to build that business to where it would grow bigger,” Hall said. “I’m excited about it. A lot of people are coming up already asking when we’re going to open. Mayor Smith joked, ‘Can you have it open by tomorrow?’”

Hall, a native of Dadeville, also feels Dadeville is well on its way to big things and has a desire to be part of that growth.

“It is certainly growing,” she said. “My thoughts are there are a lot of good changes. A lot of younger generations have never seen this so its bringing a lot of motivation to get involved in the square.”

Not a new business but one that has relocated to the square, Root 49 is now opened at West Cussetta Street to be closer to the blossoming businesses and increased foot traffic. The rustically renovated historic building is suited to owners Chelsea Lutz and Lauren Coker’s styles.

“This space fits more our personality with the rustic, old downtown feel,” Coker said. “The atmosphere is just more us; it’s homey.”

Root 49 was originally located in a small building off Highway 49, and they received a lot of walk-ins but definitely needed added space.

“Our space here is two times bigger than what we had,” Lutz said. “We have more room and we’re not stepping all over each other.”

The historic location was originally the Dadeville Coca Cola Company until 1934 and was recently renovated by its owner who exposed the original brick and added cedar elements.

“We’re not so girly that the guys wouldn’t feel uncomfortable coming in as well,” Coker said. “We have a little more of a salon feel.”

The co-owners feel they’ll see some new faces and fresh clientele in their new location on the square because more people may walk by and spot the business.

“In our other spot we were tiny and tucked away and women didn’t really hear about us unless someone told them,” Lutz said. “So this is good exposure.”

Lutz and Coker are young business owners and enthusiastic to part a part of the budding area.

“We wanted to be here because the town is working so hard at making the downtown better,” Lutz said. “It’s growing and trying to get more attention.”