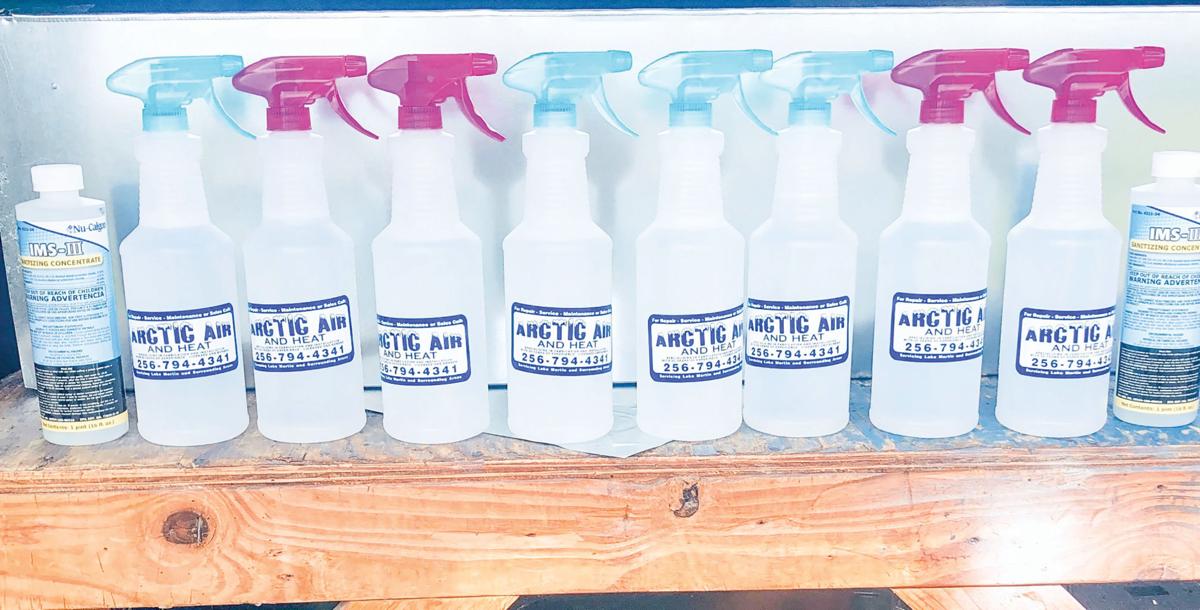 Submitted / The Outlook Arctic Air and Heat is making sanitizer solution and bottling it up to give away to the community. 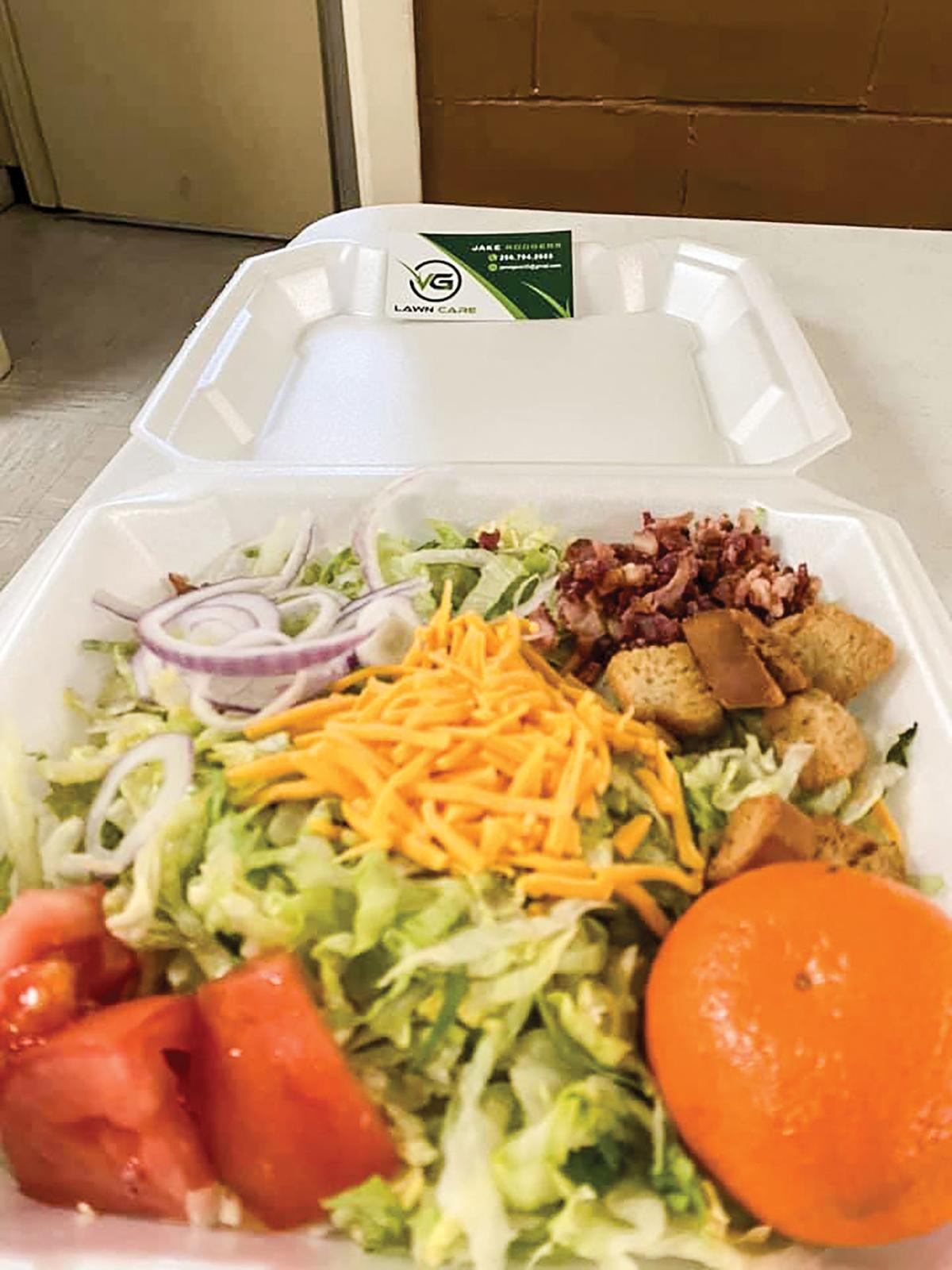 Submitted / The Outlook JRs donated its remaining produce to a group of locals who prepared salads to give away to community members in need.

Submitted / The Outlook Arctic Air and Heat is making sanitizer solution and bottling it up to give away to the community.

Submitted / The Outlook JRs donated its remaining produce to a group of locals who prepared salads to give away to community members in need.

Employees at Arctic Air & Heat are spreading the message amid the difficult times caused by COVID-19, local businesses are rallying around local people.

After discovering a way to create a sanitizing spray, operations manager Chris Giddens, with the help of his co-workers, purchased enough sanitizer concentrate to mix 10 gallons. They bottled it up to give away to the community and quickly learned the dire demand for more. Arctic Air then made 20 more gallons and has an order in to make enough for 120 gallons.

Right now, the public can pick up bottles of the complimentary sanitizing solution at Floyd’s Feed & Seed in Dadeville or Russell Do it Center in Alexander City.

“What’s surprising to me is I’ve had nurses, nursing homes, police stations, schools, retirement living places — huge massive places — where this is a large need,” Giddens said. “You would think some of these places have a 5-gallon bucket in the corner but they don’t. People are begging for this stuff.”

Between large industries and individuals who are in short supply due to panic buying, the available sanitizer is slim pickings.

“We put the product in local businesses that need foot traffic,” Giddens said. “It’s a little bit of a headache for them but if they can put up with that to get this out to more people and raise more awareness, that’s what it’s all about.”

The spray bottles come with an Arctic Air sticker directing people where to call for more information. Giddens asks people to not call the stores directly as their focus is on their customers.

“We’ve got a lot of calls of people wanting it,” Russell Do it Center shift manager Shay Bagley said. “And we’re giving out as much as we can get our hands on.”

The solution is formed from a strong concentrate restaurants have used for years mixed with water.

The mixing and bottling is being done at Arctic Air at 33 Milam Rd. in Jacksons Gap, which is also where individuals can drop off spray bottles to donate to the cause. Floyd’s and Russell Do it Center have donated all the bottles they had stocked for Arctic Air to use and people are encouraged to buy some at Dollar General to help out.

“Drop them bad boys off and we’ll get ’em filled back up,” Giddens said.

The latest supply of sanitizing concentrate has been back-ordered but Giddens said as soon as it comes in, he’ll get bottles back out to the stores.

“This is a really important time that while people are worried about 401ks and people are tightening up to band together and support our businesses,” Giddens said. “People have to understand places like JR’s pay money to be in Alex City. And they donate like crazy, support youth teams and do all these amazing things.”

JR’s owner Chris McClure aided in the pay it forward initiative and donated all the produce left in his fridge after he shut down the restaurant for the time being.

“I called Chris to ask if he was open and he said he’d be closed for at least a week or two,” Giddens said. “I asked if he had any food going bad that we could do something with.”

McClure donated his remaining case of lettuce, case of tomatoes, Ranch dressing and other salad items to create a free meal for the community.

“No sense in letting it waste and I want to help wherever I can,” McClure said.

Jake Rodgers with VG Lawn Care stepped in and asked how else he could contribute. He bought croutons, bacon bits, cheese, paper products and more to add to the salad initiative.

“It was a really selfless thing for both of them to do,” Giddens said. “And neither of them wanted any recognition.”

Wednesday morning, Giddens, along with additional volunteers, made 100 salads and posted on Facebook they were available to whoever needed them.

“By 12:30 p.m. they had all been given away,” Giddens said. “We delivered to doors, rode through neighborhoods, asked people to send us folks that didn’t need to be in a grocery store, didn’t need the extra contact.”

“Hannah is a Meals on Wheels driver, but they had canceled her route,” Giddens said. “So she saw this opportunity and took off with it.”

While it was a one-time thing, it was an effort that could take care of some needs for the day, he said.

“The lengths that people are going through to make a difference and to help brainstorm every day a new way to help, it’s important and I wanted people to know about it,” Giddens said.