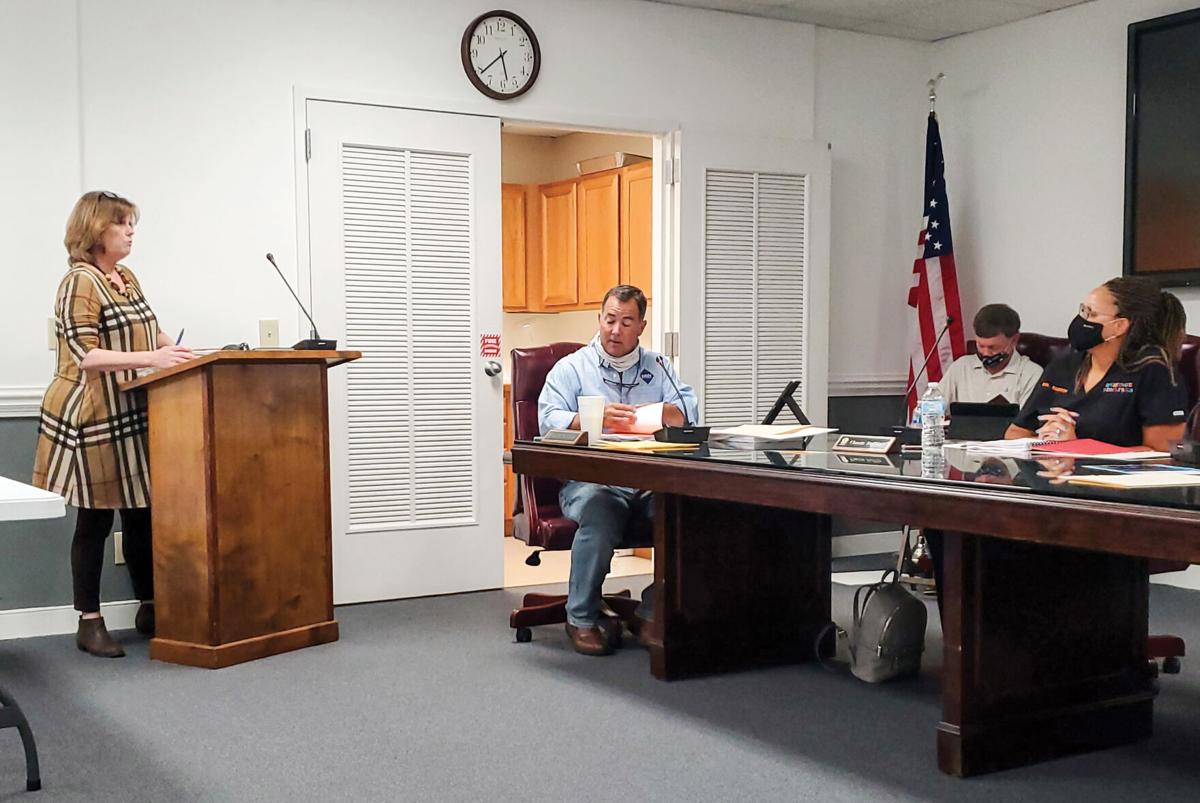 Amy Passaretti / The Outlook Alex City Schools CFO Rhonde Blythe discusses the proposed budget with the board at its meeting Thursday. 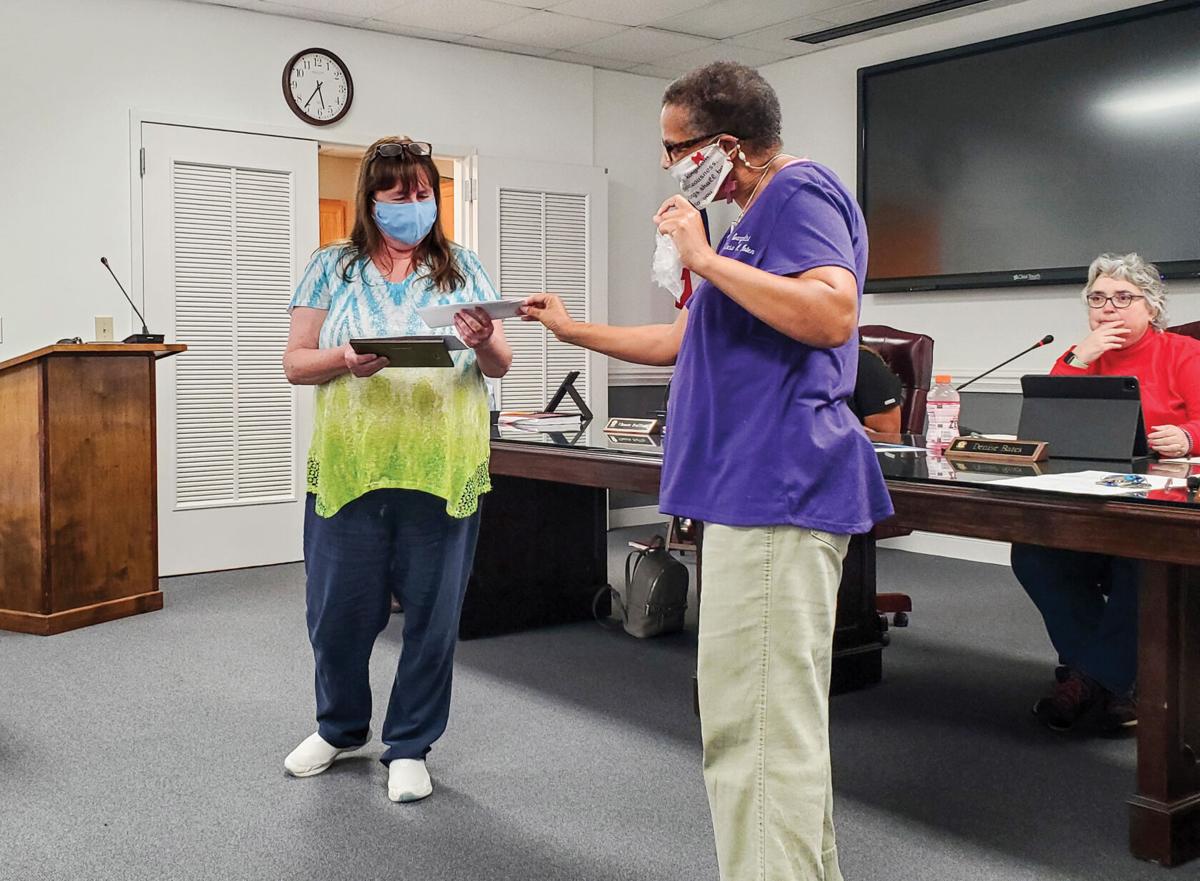 Amy Passaretti / The Outlook Teresa Moten, left, with Yes I Can mentoring program presented director of foodservice Laresa Griffin with a plaque for the cafeteria staff’s dedication and hard work to the feeding program during the pandemic.

Amy Passaretti / The Outlook Alex City Schools CFO Rhonde Blythe discusses the proposed budget with the board at its meeting Thursday.

Amy Passaretti / The Outlook Teresa Moten, left, with Yes I Can mentoring program presented director of foodservice Laresa Griffin with a plaque for the cafeteria staff’s dedication and hard work to the feeding program during the pandemic.

Alexander City Schools chief financial officer Rhonda Blythe was making changes to the “crossword puzzle” of a budget until about 4 p.m. Thursday but Alexander City Board of Education approved the proposed budget for the fiscal year 2020-21 just a few hours later at its meeting.

“This budget has been like a moving target,” Blythe said. “There was a lot of give and take to keep the budget where it is now.”

The approved budget still allows the school system to retain a three-month reserve of operating funds, which at least one month is required by the state.

Blythe also mentioned it may appear the school system is overspending but it’s been saving for many years to build up a fund balance.

“So we have the money,” Blythe said. “But we’re not actually going to spend it until the next fiscal year.”

From the first public budget hearing three weeks ago, Blythe said she made two minor changes and added an informational element for the board.

“The Foundation Program money makes up about 80% of our funding in the general fund and it’s based off two things,” Blythe said.

The first is the average daily membership (ADM), which Blythe said is extremely important. This is an average enrollment count, calculated 20 days after Labor Day. The second factor is the amount of money funded is based on teaching unit averages.

“They take all the units, pull out the federally funded units and look at the state and local units,” Blythe said. “The units are funded based on the averages of those.”

The Foundation Program is an allocation of appropriated state dollars to include required local revenue amounts school systems are required to match in order to receive state dollars. Allocation amounts are determined in accordance with the formula outlined in the Foundation Program law, according to the definitions outlined in the Alex City Schools budget.

“We have 194.90 units and we didn’t lose a lot of units this year,” Blythe said. “(Other current expenses) were gained because the per unit amount went up.”

The first proposed budget had an excess of expenditures of $136,000 but Blythe was able to manipulate the numbers and that has decreased to $46,000.

“We had an increase in sales tax through August, and that will continue to increase, so there is an increase in all sales tax and property tax,” Blythe said. “This helps reduce those expenditures down to $45,000.”

The special revenue changed slightly as well as Blythe determined how to allocate the Coronavirus Aid, Relief and Economic Security (CARES) Act money.

The budget was also altered in the capital projects category to add expenses to refurbish the tennis courts.

“We swapped that out with another item and this added $10,000 in expenses in capital projects,” Blythe said.

Board members thanked Blythe for her hard work coordinating the budget and approved its final revisions.

Also notable at Thursday’s meeting was the recognition of child nutrition program (CNP) workers for their dedication to the summer feeding program and added tasks due to COVID-19 related situations.

“The CNP staff worked extremely hard over the summer and have been recognized on the state level, by our city council and now Ms. (Teresa) Moten,” superintendent Dr. Keith Lankford said.

Moten presented a plaque to Alexander City Schools director of foodservice Laresa Griffin on behalf of her Yes I Can mentoring program.

“They have done an outstanding job and the community needs to recognize that while school was out, they were in and working during COVID,” Moten said. “And they enjoyed doing it.”

The plaque proclaims the appreciation for the cafeteria staff’s dedicated service during the pandemic.

“They never hesitate to do something extra and do what it takes to make things happen,” Blythe said.

In other action, the board: