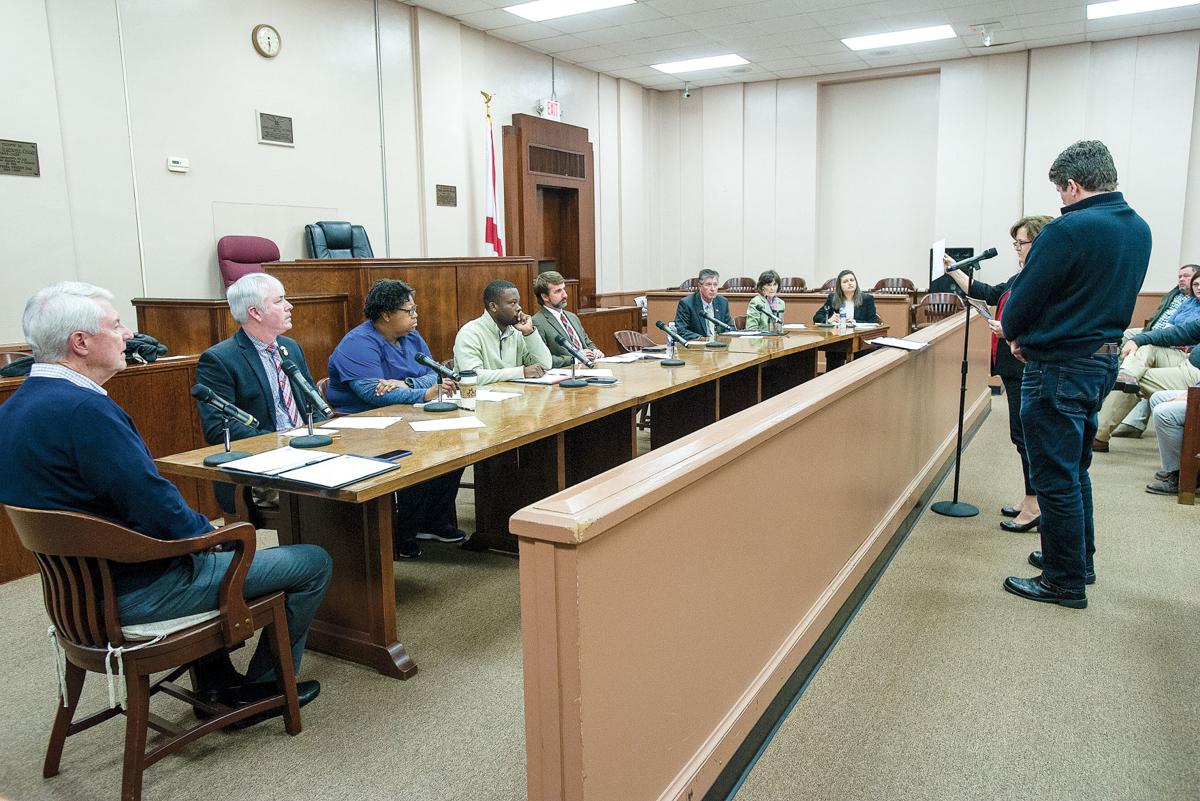 Linda Forbus shows photographs of a home in her neighborhood she says is a dilapidated home. She brought photographs to the council meeting showing a roof in bad shape, wires hanging down and other issues. 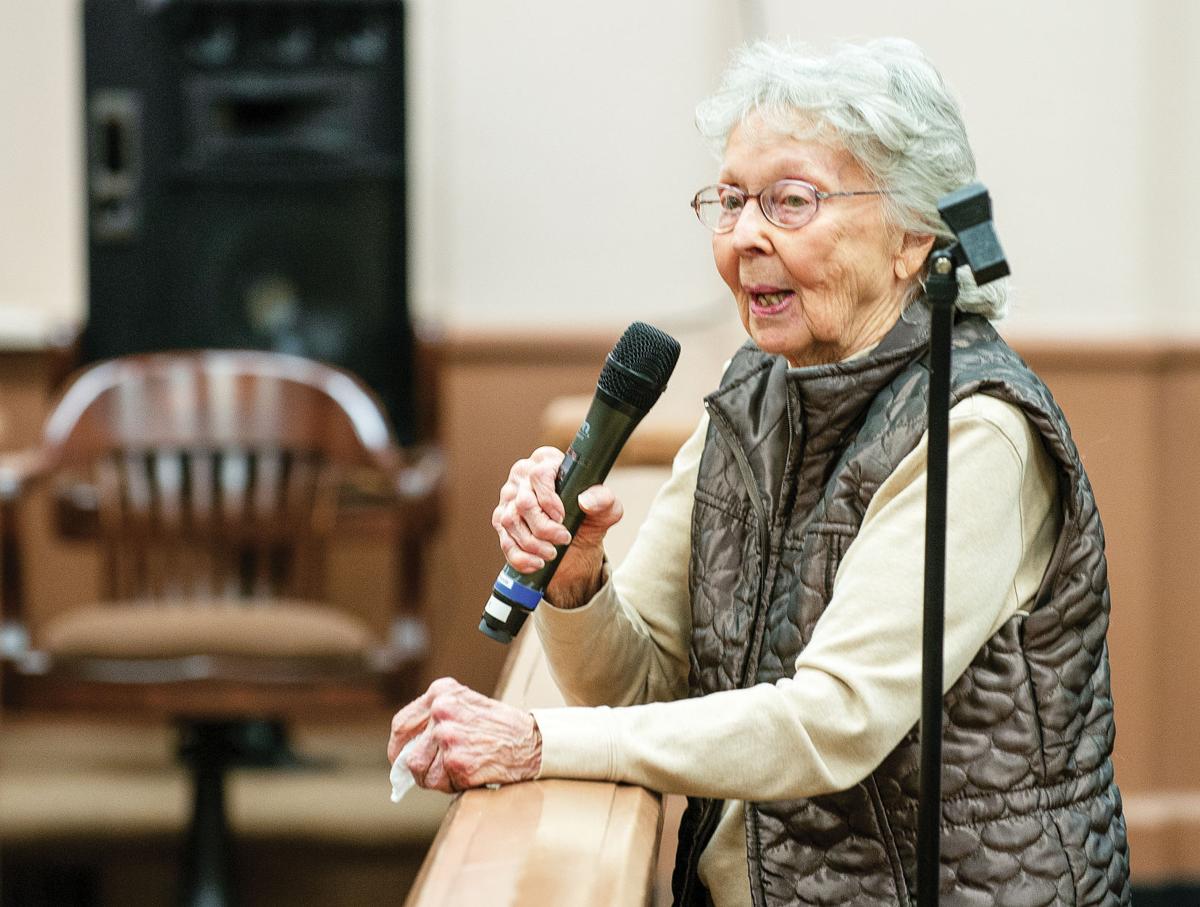 Former Alexander City Mayor Barbara Young spoke to the council at Monday night’s meeting in support of raising the salary of the mayor of Alexander City.

Linda Forbus shows photographs of a home in her neighborhood she says is a dilapidated home. She brought photographs to the council meeting showing a roof in bad shape, wires hanging down and other issues.

Former Alexander City Mayor Barbara Young spoke to the council at Monday night’s meeting in support of raising the salary of the mayor of Alexander City.

First responders are exposed to a lot of things being first to the scene — especially firefighters.

Just look at first responders from 911 and how many died from ailments attributed to their response there. Even Congress has given the 911 responders relief.

In an effort to do something similar, the Alabama legislature passed House Bill 361 last year to help provide extra cancer coverage. The Alexander City City Council passed a resolution on Monday authorizing the city to pay for the coverage.

“I think the city should take care of firefighters,” councilmember Buffy Colvin said. “I pray y’all don’t need it.”

Alexander City human resources director said the policy provides a one-time payment of $25,000 for invasive cancer, $6,500 for non-invasive cancer, up to $3,500 a month in long-term disability and has a $50,000 lifetime maximum payout. She said the department has 47 full-time firefighters who qualify for the insurance. Railey said the city found a policy for $194 a year per fighter and had budgeted $205 a year per firefighter.

Former Alexander City Mayor Barbara Young addressed the council in favor of increasing the mayor’s salary to $80,000. Young said such a measure would help encourage more qualified candidates to run and many don’t understand what all the position handles.

“I’m 100% for the mayor’s salary to be $80,000,” Young said. “The mayor’s responsibilities are more widespread than most know. The mayor is responsible to train personnel through department heads. It keeps us out of court ...How many people have the responsibility of the mayor’s job?”

Young said population should not be the only metric to look at when comparing cities.

Young was not the only person to speak to the council. Linda Forbus addressed the council about a dilapidated home on Willow Street providing photographs of structure that has been rundown for years.

“I don’t think anybody wants that view,” Forbus told the council pointing a bathroom just hanging on and a roof with holes in it. “We have a house in our neighborhood that we have been trying to do something with for five years.”

Forbus said she has tried to resolve the matter by working with the property owner and by complaints to the city.

Jim Wilder spoke to the city about the Benjamin Russell shop class being allowed to not pay the vendor license for its booth in Longleaf Antique Mall. Wilder said he was told the city couldn’t make an exception but it does not make vendors at the farmers market, Sun Festival and Jazz Fest and Oktoberfest pay the fee.

The did not address the remarks from citizens at Monday’s meeting.

Mayor Tommy Spraggins said he had appointed Jacob Meacham to serve on the planning commission. Spraggins also said the city will be seeking requests for proposals for a building it rented to Keith Watson for $1 for the first year in December 2018.

“That is now up,” Spraggins said. “He hasn’t done much with it and we are going to see what comes of the proposals.”

City finance director Sandy Stanbrough said the council plans to review the fiscal year 2017 audit at a work session. Councilmembers inquired about the status of catching up wanting to know when the city might be on a regular audit schedule.

“There has been a lot progress made on 2018,” Stanbrough said. “We have addressed many of the deficiencies already noted in prior audits. I don’t see the ‘20 audit being on time but I do for the ‘21.

Councilmember Chris Brown was absent from the meeting.

In other action, the council:

• Heard from public works director Gerard Brewer who gave an update on funds and projects the city will do under the Rebuild Alabama Act. Brewer said the city had not yet received any funds and plans to redo the entrance to the city cemetery first with the funds. He said the project will be completed with an ACRIP project to avoid a mobilization cost for a small project.

• Entered an executive session to discuss the purchase of property. The council reconvened its regular meeting 30 minutes later and took no action.